One Person, No Vote? 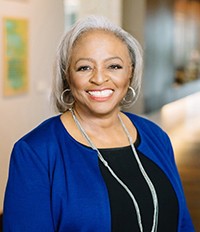 In advance of the volatile November elections, 582 students, faculty, and other attendees logged on for a bracing Zoom lecture titled “One Person, No Vote,” delivered by historian and best-selling author Carol Anderson of Emory University. Jointly sponsoring the event were the Carroll School’s Winston Center for Leadership and Ethics and Boston College’s Lowell Humanities Series, along with the History Department. Anderson chronicled a history of U.S. policies and practices aimed at suppressing the vote among Black Americans, which she argues is now warping democracy in this country.

During the September 30 lecture, she noted that by 1940, only three percent of Black adults in the South were registered to vote—a figure that ballooned to almost 60 percent in the wake of the 1965 Voting Rights Act. But with the Supreme Court’s gutting of that federal law, in 2013, barriers to voting began to mount once again, according to Anderson. She cited previously unlawful measures such as restrictive “Voter ID” laws that disproportionately affect African Americans—for example, by requiring the kinds of identifications that are less available in their communities.

“This is how you craft an electorate, and how you depress the Black vote,” Anderson told the Boston College audience. Professor Martin Summers of the History Department, a cultural historian of 19th- and 20th-century America, served as moderator of the program.

Winston Center director Monetta Edwards said: “This talk was especially timely and important for our students to hear. Dr. Anderson honed in on the fact that voting is their power.” Edwards emphasized that students affiliated with the Winston Center, including Winston Ambassadors and Jenks Leadership members, made sure to exercise that power this year. They spearheaded a nonpartisan campaign, primarily through social media, to provide fellow students with information about voter registration and to otherwise get out the vote.

Students also read Anderson’s book One Person, No Vote, and signed up for a pre-lecture Zoom with the author. “All of that helped them gain critical thinking around this topic and inspired them to influence change,” said Edwards.