Ben Austen, a journalist and Chicago resident, is the author of High-Risers: Cabrini-Green and the Fate of American Public Housing (Harper, 2018), and he delivered a lecture in Gasson Hall sponsored by the Joseph E. Corcoran Center for Real Estate and Urban Action and the Winston Center for Leadership and Ethics. 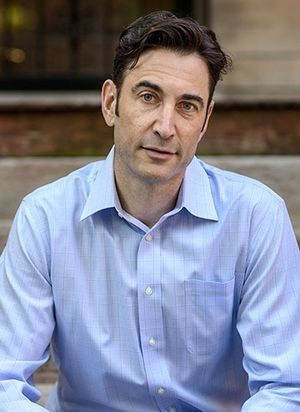 Not too long ago, young professionals and empty nesters were hardly flocking to cities like Boston and New York, now in vogue. They and many others were more likely to swap horror stories about the frightful “inner city,” and the plot line in those narratives often revolved around the system of high-rise public housing.

A popular author came to Boston College on April 9 and helped unpack a mystery, What ever happened to those low-income, high-rise complexes, and why did it happen? Ben Austen, a journalist and Chicago resident, is the author of High-Risers: Cabrini-Green and the Fate of American Public Housing (Harper, 2018), and he delivered a lecture in Gasson Hall sponsored by the Joseph E. Corcoran Center for Real Estate and Urban Action and the Winston Center for Leadership and Ethics.

Cabrini-Green is the infamous public housing project in Chicago, named for Mother Francesca Cabrini a few years before the Italian-American nun was canonized in 1946. It started out as a cluster of row houses, morphing into 23 towers—which vanished by 2011.

Showing slides of dreary, blighted structures, Austen made it clear that living in Cabrini-Green was no picnic. But he said the demolition of the towers had less to do with quality of life than with national hysteria over crime, gangs, and crack cocaine, specifically in African-American enclaves.

The author cited an example in popular culture—the 1992 horror film Candyman, and two sequels. The movie was set in Cabrini-Green, featuring a superhuman slasher who burst into apartments through medicine cabinets. In the public mind, it helped fashion the legend of ghetto “superpredators”—invariably young black men, supposedly devoid of conscience and empathy.

Why Your Neighborhood is Still Segregated, After All These Years

“Cabrini-Green had real problems. It needed to be safer and more livable, but it had also emerged as a character in the national imagination,” Austen told an audience consisting mostly of undergraduate students in a small but packed lecture room in Gasson. “The fear wasn’t a monster. It was public housing itself. The fear and panic almost guaranteed that the people living there would lose out with whatever came next.”

Ironically, Candyman surfaced right around the time that violent crime (in retrospect) began ebbing in Chicago and many other cities, Austen noted. That, however, did not stop what “came next”—the mass demolition of public housing complexes nationwide, beginning during the Clinton administration of the 1990s. (Mass incarceration also followed.)

“The nightmare image of public housing has real costs—we don’t see the real people living there,” said Austen, who devotes much of High-Risers to the often-complicated stories of Cabrini-Green residents. “And the only response in the imagination is to eliminate the threat.”

Was it the architecture?

Many have blamed the fate of public housing on bad architecture—the high-rise towers and superblocks with no through streets, all of which isolated residents from the rest of the community, as Austen relates. He acknowledges that this design was far from ideal—“It’s harder to ensure public safety,” he pointed out. At the same time, he writes of how “skyward” apartment buildings enchanted both rich and poor during the mid-20th century. One upper-floor Cabrini renter at the time said it felt as though she were residing in “the heavens.”

More to the point, Austen explains that the early inhabitants there had previously dwelled in fire-prone, disease-spreading tenements. “We thought we were playing God in those days,” said one of the development’s architects quoted by Austen. “We were moving people out of some of the worst housing imaginable and we were putting them into something truly decent. We thought we were doing a great thing, doing a lot of innovative design things.”

Racial injustice had no slight part in it, according to Austen. Projects like Cabrini-Green were relegated to racially segregated neighborhoods, largely owing to resistance from white homeowners, and the African-American residents had little clout with lawmakers. “There was gross neglect, and the buildings were allowed to deteriorate,” he remarked at the early evening lecture.

Still, some 15,000 people called Cabrini-Green home. “I knew everybody. We were like family,” one resident told Austen.

There was a bit of pushback during the Q&A. Austen had said the Cabrini-Green site now includes some mixed-income housing, and one professor said this should be considered an improvement. The author agreed, but added that the mixed-income townhouses there represent a mere “sliver” of the units in what is now a pricey development. The larger question, he said, is what to do about the crisis of affordable housing in the United States, at a time when low- and moderate-income renters must enter lotteries to win entry into dwindling subsidized housing.

Asked by a student about the relationships he formed with Cabrini residents, the journalist related that he “still hangs out” with a spirited woman named Dolores Wilson, who moved into Cabrini with her family in 1956 and stayed until the end. He recently asked Wilson what message she would send to audiences, and she replied—“Tell them there was a lot more love in Cabrini than terrorizing.”