Why are portions of movie theater popcorn roughly seven times larger than they were during the 1950s? What happens when two males decide together on buying a car or some other product, without a female involved? And what does color have to do with consumer perceptions?

These are among the many questions that surfaced at the inaugural “Boston Judgment and Decision Making Day,” held April 8 in Fulton Hall and sponsored by the Carroll School of Management’s Marketing Department. The all-day conference assembled 70 scholars from institutions ranging from Harvard and Yale to Penn State and University College London. 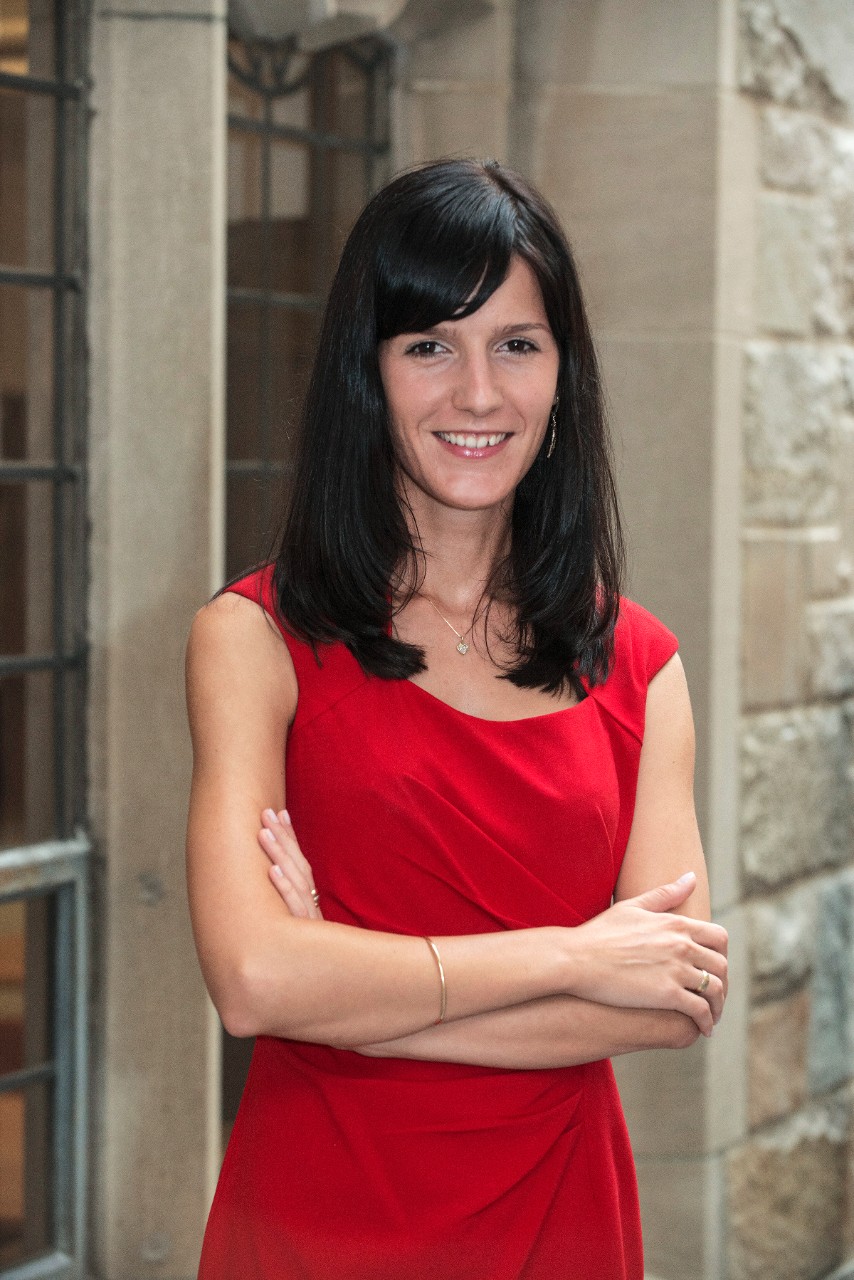 Coughlin Sesquicentennial Assistant Professor of Marketing Hristina Nikolova, one of the event organizers

It was a multidisciplinary affair, featuring not only marketing experts but also specialists in other fields such as behavioral psychology, economics, cognitive sciences, and the law. “It’s very broad,” said Coughlin Sesquicentennial Assistant Professor of Marketing Hristina Nikolova, referring to the research specialty of judgment and decision making, known in the trade as JDM. “That’s the beauty of it.”

Nikolova teamed up with Carroll School Assistant Professor of Marketing Nailya Ordabayeva to organize the event. Ordabayeva said the conference grew out of smaller, informal gatherings of specialists at Boston-area institutions such as Boston University and Northeastern. “The field is definitely growing,” she said.

Besides spearheading the conference, Ordabayeva and Nikolova stepped up to the lectern, at different times, to report on their own JDM findings.

Harder Than It Looks

Ordabayeva led off the day with a presentation titled “The Visual Acuity of Less: Why People Underestimate Increases but Not Decreases in Quantity.” She began by displaying two images of cinema-style popcorn boxes. The first was a black-and-white shot from the 1950s, showing a petite young woman clutching a popcorn box with one hand at a refreshments counter. The second was a contemporary image in full color of a popcorn bucket that would likely require two hands even if toted by a seven-footer playing for the Boston Celtics. Captions indicated that a typical popcorn serving at the movies has ballooned from 3 cups and 174 calories during the ‘50s to 21 cups and 1,700 calories today (without added butter).

Why have popcorn boxes and other food servings swollen so?

There are various reasons, and at the conference Ordabayeva alluded to economies of scale as one of them. It is natural to suppose that another factor is the susceptibility of humans to one of the seven deadly sins—gluttony. But the marketing professor has an altogether different idea that she has tested in clinical studies. “The problem is that visual impressions are really biased,” she told her fellow researchers. Simply put, people are bad at calculating the size of large, three-dimensional objects.

In fact, as Ordabayeva explained, consumers tend to underestimate increases in product size, and there have been plenty of those increases with the supersizing of fast-food servings. She made clear that the consequences of this miscalculation are serious: “As a result, consumers overeat when served supersized food or drinks.” At the same time, the professor said people are likely to be far more accurate when estimating decreases in product size. That happens, for example, when restaurants shrink portions for calorie-conscious patrons.

Why are the guesstimates of supersizes so far off? One big reason is that when surmising those portions, people normally don’t have “an upper bound,” Ordabayeva said. In other words, there’s no clear limit to the potential size of a food serving, so they don’t have a reference point for calculating the bigger portion. That’s not the case with smaller sizes, she noted. People do have a reference point, a lower bound, for estimating those: zero.

In her brief presentation, Ordabayeva did not have much time to discuss the implications of her research findings. But later in an interview she pointed to some ways of making it easier for consumers to calculate the increases in size.

One approach is to give people the upper bound by “drawing attention to the capacity limit,” she suggests. An example would be to provide a cup for self-serving at a Slurpee counter while also telling the customer how much the cup can hold. That “makes people aware of the limits, more mindful of the servings,” Ordabayeva explains. Another “simple trick,” she says, is to increase the size of a package by only one dimension—for instance, with a tube-shaped box of candy on the drugstore shelf. That’s much easier for the human mind to compute than an upsizing that involves a three-dimensional change in space, according to her findings. “It’s really a computational problem,” she says.

After a lunch for conference participants, Nikolova delivered her presentation titled “Men and the Middle: Gender Differences in Dyadic Compromise Effects.” Her clinical studies have built on research into the so-called “compromise effect,” in which consumers tend to choose the middle option in a set of three product choices. For example, they are (in theory) more likely to pick, say, a Honda Accord rather than the lower-cost Civic or the higher-cost Acura. Retailers often try to capitalize on this effect by adding a third, higher-priced version of a product.

Nikolova has found that men and women—acting individually or together—make choices along these lines. They go for moderation rather than low or high extremes. Two women cooperating on a purchase do the same. But the pattern differs when two men decide together, according to her research.

After explaining some of this background, Nikolova drew laughs from the audience by displaying a slide that summarized recent studies of “Male Dyads” by psychologists Jennifer K. Bosson and Joseph A. Vandello. Among the conclusions of this research, as read aloud by Nikolova:

Nikolova’s decision-making research bears out these general male traits. When purchasing an item together, two men will characteristically veer toward the extreme option—for example, choosing the more expensive restaurant or the riskier stock that offers a higher potential level of return.

The findings matter in part because “there are a lot of decisions that men make together,” she said during her presentation, mentioning the example of a father and son choosing the kid’s first car. Nikolova added in an interview that it’s good for both men and women to be aware of these tendencies and biases but that the product choices made typically by two men aren’t necessarily bad. “Sometimes the best option is not the middle option,” she said. Sometimes the riskier stock might be the better choice.

Aside from the two conference organizers, the other Boston College faculty members presenting at Boston Judgment and Decision Making Day were Bleier and Hagtvedt.

Bleier summarized his research conducted with collaborators Joshua Beck of the University of Oregon and Ryan Rahinel of the University of Cincinnati. Their studies have focused on the brand preferences of people who have feelings of “low control” due to recent occurrences ranging from traffic delays to abusive relationships and frustrations at work. The general finding is that the sense of lost control “influences preference for brand leaders,” said Bleier, referring to how these people gravitated toward names such as Nike, Walmart, and Samsung. His explanation: “People in low-control conditions imbue brand leaders with the power to impose order.”

The most recent study by the team looked specifically at those who dwell in high-crime neighborhoods, and likewise, these people were more likely than others to prefer brand leaders. They saw these brands as “active agents, able to restore control” over their surroundings, Bleier concluded.

Late in the day, Hagtvedt presented research gathered by him and Carroll School Chairperson and Associate Professor of Marketing S. Adam Brasel. “Color is ubiquitous,” Hagtvedt observed, proceeding to display colorful images of iPhones, beach chairs, signs (including “Keep Calm and Test the Hypothesis”), and other items. One of the specific findings is that people tend to “identify objects highly saturated in color as larger” than equally large items of the same hue but less dense in their colors. He clicked on a slide showing two red gym bags of identical size—one more intensely red than the other. That one was seen by study participants as larger than the bag with less saturated color.

Along with the four Boston College marketing professors, Haewon Yoon, a Carroll School postdoctoral fellow, delivered remarks titled “Dynamic Inconsistency and Discount Rate in Discounting Models,” which took a critical look at established research models that examine so-called “temporal discounting” (why some people but not others would prefer, say, a $10 reward or payment today over $15 a month from now). In summarizing his findings, Yoon quoted the late legendary statistician George Box as saying, “All models are wrong, but some are useful”—which drew chuckles across the room.

The end-of-the-day keynoter was Dilip Soman, marketing professor and Corus Chair in Communication Strategy at the University of Toronto’s Rotman School of Management. He applied decision-making theories to public policy matters such as organ donation and compliance with tax laws. It turns out that people are far more likely to sign up as organ donors when they’re asked not whether they’d like to make a donation but what kind of donation they’d like to make—for example, “transplant only” or “organ and tissue research.” He displayed a Canadian form distributed in Ontario that takes this approach, with no box for opting out of organ-donor registration. People do have to sign the form and can withdraw their consent at any time.

Judging the conference to be a success, Ordabayeva and Nikolova said a second annual Boston Judgment and Decision Making Day will be held next spring under the auspices of the Carroll School or another university in the area.