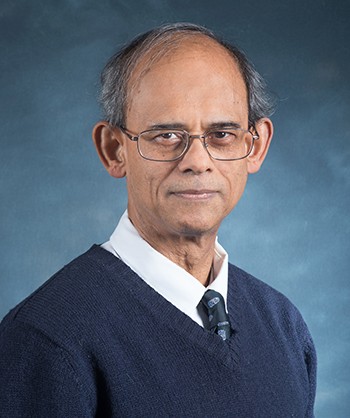 After over a decade and half in theoretical physical chemistry and chemical physics of disordered systems, particularly supercooled liquids, quasi-crystals, glass, solid-liquid phase transition, much of Udayan Mohanty’s research focus since 1994 has been on problems that bridge the gap between chemistry and biophysics. Early work explored polyelectrolyte behavior of highly charged biopolymers (Gerald Manning (Rutgers)), including A-tracts with Tali Haran (Israel Institute of Technology), in aqueous solution. He has played a leading role in developing, in collaboration with experimental groups (Steven Chu (Stanford) and David Bartel (MIT)), the effects of ion atmosphere on the dynamics of nucleic acid fragments in free solution and in gels. Mohanty has established theoretical frameworks with Clifford Taubes (Harvard) and computational methods with Jose Onuchic (Rice) of analysis to excess ion atmosphere around DNAs and RNAs, including riboswitches and rRNAs. Much of Mohanty’s current research has centered on developing techniques to unravel how diffuse ions regulate conformational dynamics of group-II introns and ribonuclear protein assemblies (Paul Whitford, Northeastern).  A recent aspect of Mohanty research has been in materials. In close coupling between theory and experiments (with Dunwei Wang and Lucas Bao), Mohanty’s efforts have been in controlling ionic behaviors in metal-organic-frameworks (MOF) for Mg2+ transport.  Another recent aspect of Mohanty research has been in establishing computational methods for conformational dynamics of glycosaminoglycans and their synthetic analogs (with Jia Niu).