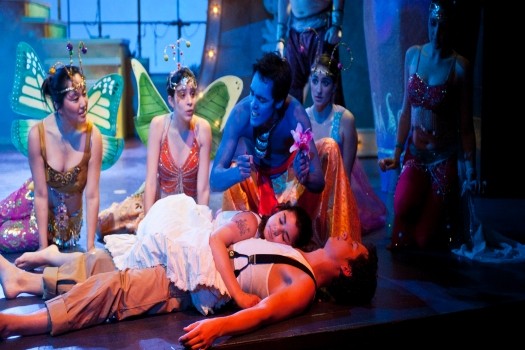 Students, majors and non-majors alike, who work on preparation crews or running crews for Theatre department productions are eligible to sign up for a one-credit lab. This must be done during course registration in the first week of each semester. A Theatre major is required to earn six laboratory credits in order to complete the major. See website for details on signing up for labs.

Lab credits can be earned in a variety of ways.

The ASM reports to the stage manager. There are up to two ASM’s per show. During performances the ASM’s work backstage and are in charge of the shift crew.

If you register for a run crew, you are required to be at all technical and dress rehearsals as well as every performance and strike (approximately ten days in all). There are a number of run crews. These one credit labs are Pass/Fail.

If you register for a prep crew you will be expected to complete 22 hours of work in your designated area over the course of the semester, usually two hours per week.

The SM has substantial responsibilities during rehearsals and the run of the show. During the rehearsals the SM takes notes and follows the script while the actors speak their lines. During performances the SM calls all of the cues. It is understood that the stage manager or his/her assistant will arrive sufficiently before the rehearsal to prepare the space, and remain after the rehearsal to return the space to a condition consistent with the use of the room. The SM is expected to be the last student to leave the rehearsal and is charged with compiling a detailed report of each rehearsal. A complete explanation of the SM’s remaining duties is available in the Rehearsal Guidelines.

Typically, all student designers must have taken upper level design courses in the area in which they are working. When chosen to design, the student works under the guidance of a faculty designer. All designers are expected to conduct significant research and attend all production meetings.

By permission: Russell Swift
The Technical director is responsible for planning and executing the construction of the scene design. Technical Directors are assigned at the end of the previous academic school year to design a workshop production through the Theater Department.