The Sue L. Nguyen (M.A. ’73) Prize for Academic Excellence in Graduate Studies in Romance Languages and Literatures is a cash award given at the end of each academic year to a student enrolled in one of the three Masters of Arts programs (French, Hispanic Studies and Italian) selected by the department faculty for outstanding performance in her/his course work. The prize was established in 2014 by the family of the late Sue Nguyen in her memory and in recognition of her appreciation for the value of graduate education in Romance Languages and Literatures. Students are nominated for the prize by the faculty of the department.

Ms. Nguyen was a dedicated guidance counselor in the Houston Independent School district for more than twenty years. After her death, the Houston Area Women's Center named their Children's Enrichment Center in her honor. 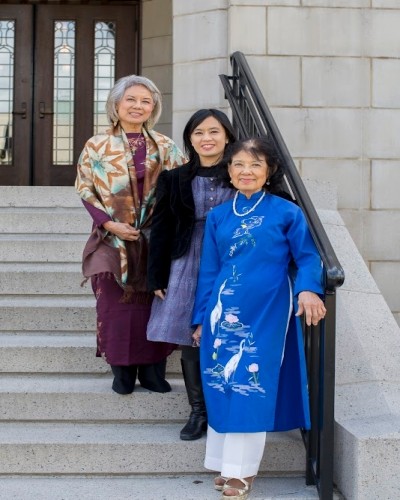 A visit to Boston College by two sisters of the late Sue Nguyen, Ms. Bich Thi Nguyen (in blue) and Mrs Nancy Lee, with (center) her daughter, Ms. Glenda Lee.