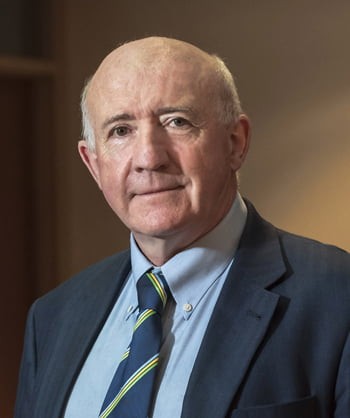 Dermot Moran is the inaugural holder of the Joseph Chair in Catholic Philosophy.  He has been Professor of Philosophy at University College Dublin since 1989 and Visiting Professor at Yale University, Northwestern University, Rice University and Connecticut College.  He is currently President of the International Federation of Philosophical Studies/Fédération Internationale des Sociétés de Philosophie (FISP) and a member of the Institut International de Philosophie (IIP) and the Royal Irish Academy.  He is Founding Editor of The International Journal of Philosophical Studies (1993) and Co-Editor of the book series Contributions to Phenomenology (Springer).  His research areas include medieval philosophy (especially Christian Platonism) and contemporary European philosophy (especially phenomenology).  He has been awarded the Royal Irish Academy Gold Medal in the Humanities in 2012, and an Honorary Doctoral Degree from the National and Kapodistrian University in Athens in 2015.  He is Honorary Professor at Wuhan University.  Dermot Moran is the author of 9 monographs (including 2 translations into Spanish and Chinese), 1 co-authored book [also translated into Chinese], 15 edited books, 43 peer-refereed journal articles, more than 120 book chapters and encyclopedia entries, and over 250 invited lecture and conference presentations internationally.