How a Blue Sweater Launched a Global Anti-Poverty Crusade

“‘It all started with the blue sweater,’” said Assistant Dean Ethan Sullivan, quoting from a familiar book. He then looked up at about 400 undergrads. “These are the first words you all read as Carroll School students.”

That’s because that line opens The Blue Sweater: Bridging the Gap Between Rich and Poor in an Interconnected World. Each summer, incoming Carroll School freshmen are required to read that New York Times bestseller, which they then discuss in their Portico class. The book “illustrates the ideals we would want students at a Catholic, Jesuit business school to explore,” continued Sullivan. “It chronicles [the author’s] quest to understand a problem and it challenges readers to grant dignity to the poor and to rethink their engagement with the world.”

That author, Jacqueline Novogratz, was there in Robsham Theater that November evening, invited by the Winston Center for Leadership and Ethics. Novogratz is the founder and CEO of Acumen, a nonprofit venture fund that invests patient capital into startups focused on delivering affordable health care, water, housing, and energy to the poor. She is “an example of the type of thinkers and problem-solvers we hope you all become,” Sullivan said.

In 1987, a 25-year-old Novogratz was out on a jog in Kigali, Rwanda, where she was helping to run a microfinance bank, when she spotted a boy wearing a distinctive blue sweater just like one that she had donated to Goodwill a decade earlier in Virginia. She approached the boy and asked to see the label. Sure enough, her name was still handwritten on it. Ever since, that incident has served as a reminder of how we’re all connected, Novogratz wrote in her book. “Our actions—and inaction—touch people we may never know and never meet across the globe.” 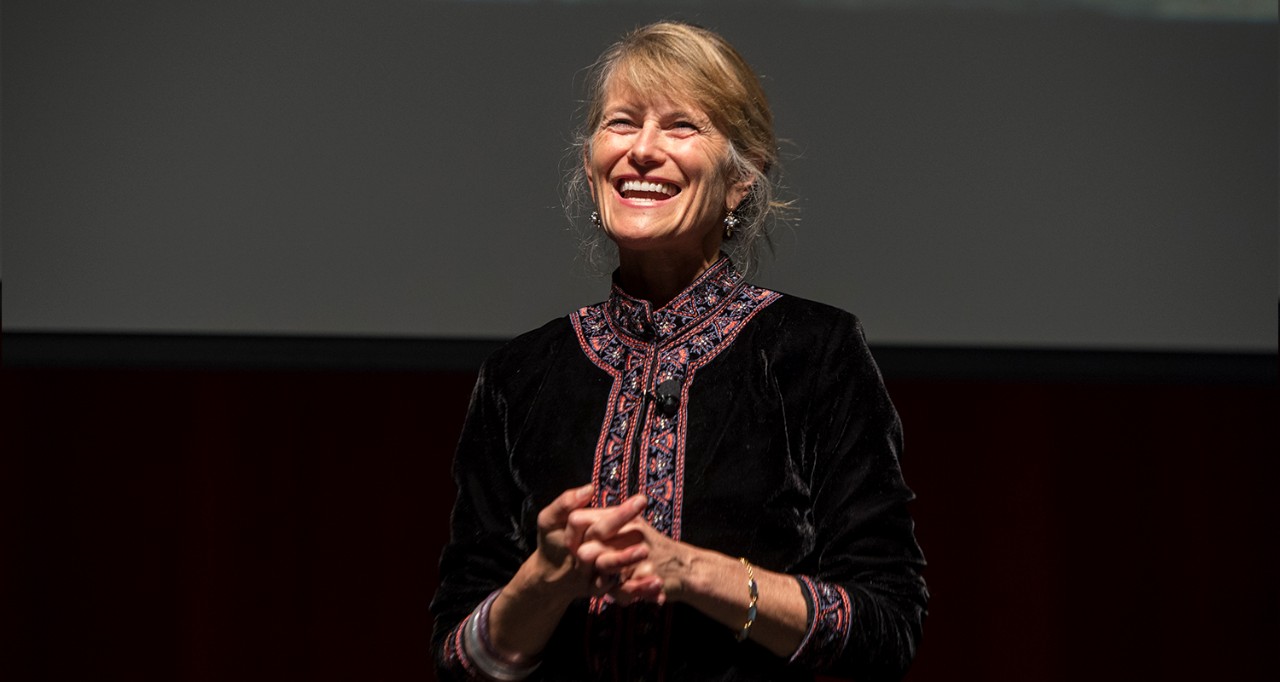 But in her talk at Robsham, titled “Creating a World Beyond Poverty,” Novogratz began her story earlier, when she was a student at the University of Virginia at Charlottesville. The speaker vividly evoked her undergrad days, when she was in the same position as the students in the seats that November evening, pondering their own questions about their career and life goals.

She recalled one Christmas season at UVA, when she had the “great idea” to deliver gifts and food to a family she’d heard about who needed help. The morning after a party, she and her friends, “a little hungover,” piled into a car and sought out the home, located “on the wrong side of the tracks,” Novogratz said, in rural Albemarle County. Novogratz was not well off—she was putting herself through college—but this was another world altogether.

“It was so shocking,” she admitted. “We were asking for directions, and we couldn’t understand what people were saying, even though they were speaking English. They kept saying, ‘They live right behind Earl’s woodshed.’ And when we found Earl’s woodshed, we saw this little shanty house.

“Suddenly, I didn’t feel good and full of the holiday spirit. And I told my friends, ‘Look, I just want to drop the stuff off and let them find it. They don’t need to see these sunny-faced co-eds happily hand them their gifts.’”

“Our actions—and inaction—touch people we may never know and never meet across the globe.”

That was when Novogratz understood that “none of us want to just stand there taking charity,” she said. “We want to have more agency in our lives.”

Still determined to help the poor somehow, the newly minted economics and foreign affairs graduate reluctantly went to a job interview at Chase Manhattan to mollify her nervous parents. The first question, from “a cute guy, just a couple years older than me,” she recalled, threw her for a loop: “Why do you want to be a banker?”

“I don’t want to be a banker,” she confessed. “I want to change the world. My parents wanted me to do this interview. I’m so sorry.”

“That’s too bad,” the interviewer responded. “Because with this job, you’d be traveling the world, to 40 countries in three years.”

And that’s how Novogratz launched her career. Landing the job despite that rocky start, she traveled to Latin America. “I learned how to understand numbers, how they tell a story; how to put money into a business and see how it translates into jobs and opportunity. What I didn’t love was seeing how the poor are excluded from that system.”

The experience gave Novogratz the hard nose and the horse sense she needed a few years later when, working for UNICEF, she assessed the loan applications and business plans of Rwandan women who were barely scraping by selling baked goods and baskets. As co-founder of Duterimbere, a microfinance lender, she was determined to forge a new kind of philanthropy: rather than doling out aid, she worked with underserved women so that they could stand up on their own two feet. To do otherwise, she feels, is demeaning to the poor. 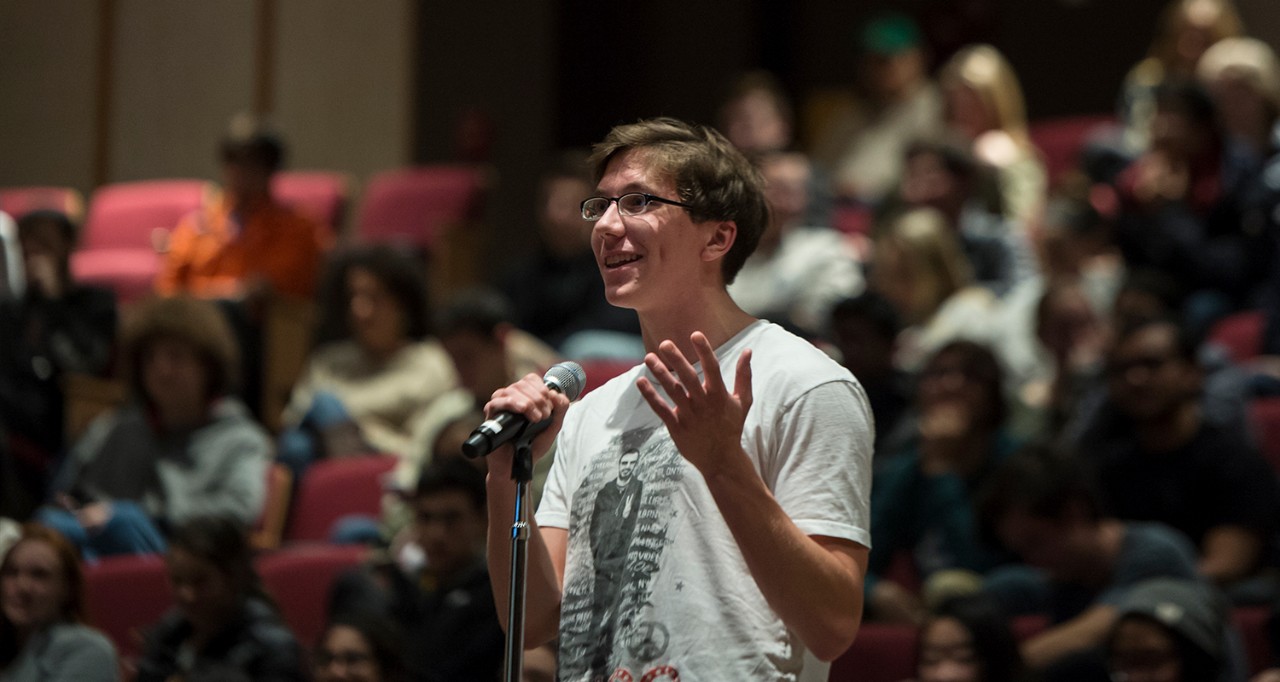 “Poverty is simply a definition of one’s economic situation,” she told the Boston College crowd. “It tells you nothing about a person’s character.” Nor do riches, she noted: “Money is not an end in itself. Money is just a means to an end, and if the end is human dignity, then we’ve got to rethink investing.”

Novogratz carried that principle, along with lessons from Rwanda, into her signature endeavor, Acumen, which she founded in 2001 with a mission to invest in opportunities in the developing world. “You have to start with a moral premise,” she said. Instead of focusing on rewarding shareholders, “start by defining your success by how the poor are treated, how the vulnerable are treated.”

A decade and a half later, Acumen has empowered 75 companies to create 58,000 jobs and bring basic services to 100 million people across South Asia, Africa, and Latin America. Novogratz outlined a few of these success stories for the Robsham audience, such as Solarnow. Based in Uganda—where 85 percent of the population lacks electricity—Solarnow sells rural customers solar systems on a pay-as-you-go basis, providing them with a power source more affordable and sustainable than the kerosene many have relied on.

In Mumbai, India, in 2007, Acumen invested in Ziqitza, an ambulance company seeking to disrupt an entrenched, corrupt industry, where ambulances more often than not simply shuttled the dead to the morgue. Skeptics said the industry couldn’t be changed, but “entrepreneurs love the word ‘impossible,’” Novogratz said. Today, almost a thousand Ziqitza ambulances speed healthcare professionals to emergency sites across the country and even conduct free health checkups.

Uncommon Cacao, a new company in the Acumen portfolio, boosts pay to smallholder cacao farmers in Latin America by cutting out the middlemen in the chocolate supply chain and linking the farmers with the more lucrative specialty chocolate market. “It’s exciting to see entrepreneurs not much older than you are who are changing the world,” Novogratz said.

The key has been patient capital. “We’ve been willing to take the risk on early-stage investments with these intrepid entrepreneurs,” Novogratz said, “and we accompany them, connect them to networks, and we give them time to fail and to try again.”

Indeed, Novogratz herself has failed—“over and over and over,” she said—and tried and tried again before finding success. “In many ways, that’s my message to you tonight,” she said. “Have the courage to fail. It sounds easy, but you actually gain courage by practicing courage. Very few of us are born courageous.”

Another takeaway from the talk: “Accompany one another,” Novogratz said. “It’s a very Jesuit idea. None of us make change by ourselves. Support one another.”

“None of us make change by ourselves. Support one another.”

When it was time for Novogratz to take student questions, 30 long and silent seconds passed before a young woman in the Jenks Leadership Program approached a waiting microphone.

“At what point in your college career did you know what you wanted to do?”

Before answering, Novogratz thanked the student for braving the silence to ask that first question. “Speaking of practicing courage!”

Rather than devising a concrete plan in college, Novogratz said, she followed her “north star,” the desire to tackle global poverty. The particulars came together as she learned more about the world through her early career and travels. “Go to where in the world you’re most needed,” she counseled, as—the floodgates now open—streams of students approached the two microphones set up on the theater’s landing. “But don’t wait around to find your purpose, and don’t get panicked about it. Just start. Make a commitment to something, and in that commitment you’ll find freedom. And it will lead to the next thing.”

One of the evening’s most memorable exchanges came when a mop-haired young man in a Ringo Starr “Peace & Love” T-shirt prefaced his query by explaining that he, too, wants to travel. In fact, he said, “I took a trip across the U.S. this summer, just to see what America’s about.”

Before the student could proceed to his question, Novogratz jumped in with her own interrogatory: “And can you teach us?” she wanted to know. What did he learn about America?

“Um, well, it’s definitely a lot bigger than you think,” came the reply. “I was traveling on the train and for hours, it’s just corn. Like, never-ending corn.”

As insights go, it might not sound like much, but as Novogratz found in her life and as she stressed in her talk, when it comes to understanding and tackling the world’s problems, you have to start somewhere.