Our police officers are granted police authority from the Commonwealth of Massachusetts, which allows them the same authority and powers as local or state police in or upon the lands and structures owned, used, or occupied by the University. Additionally, Boston College police officers have deputy sheriff powers for use in off-campus situations.

Our security officers, and gate attendants while not sworn police officers, do have authority as officials of the University and are empowered to enforce its rules and regulations.

The Boston College Police Department works together with our community to create a safe and secure campus environment that encourages mutual respect, caring for others and responsible behavior.  The department’s policies, practices and services are aligned with the University’s Jesuit traditions to search for truth in every discipline, foster the desire to learn, and live justly together.  We serve our community by providing professional police and public safety services 24 hours a day, every day of the year and recognize our role to exercise good judgment and discretion in the enforcement of laws, policies and community expectations.

As a service-oriented team, our greatest asset is our personnel, and our greatest strength is our partnership with the University.  This partnership is the foundation for maintaining a community that fosters rigorous intellectual, spiritual, ethical and personal formation of its students so they are prepared for citizenship, service and leadership in a global society.

Our vision is to exemplify the best practices and professional standards in our field and to be recognized by our community and our profession as a leader among university public safety organizations.  We will model ethical behavior and work in partnership with all members of the University community to maintain a campus environment that is conducive to teaching, learning and personal growth. 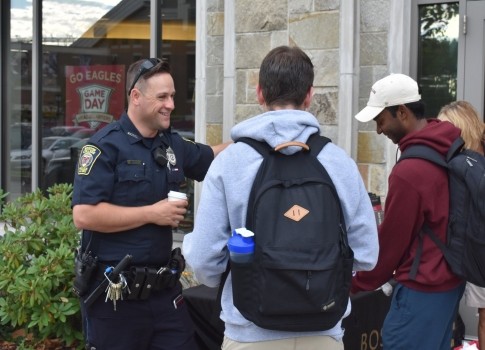 "Our officers are committed to establishing and maintaining positive and professional relationships with our community."