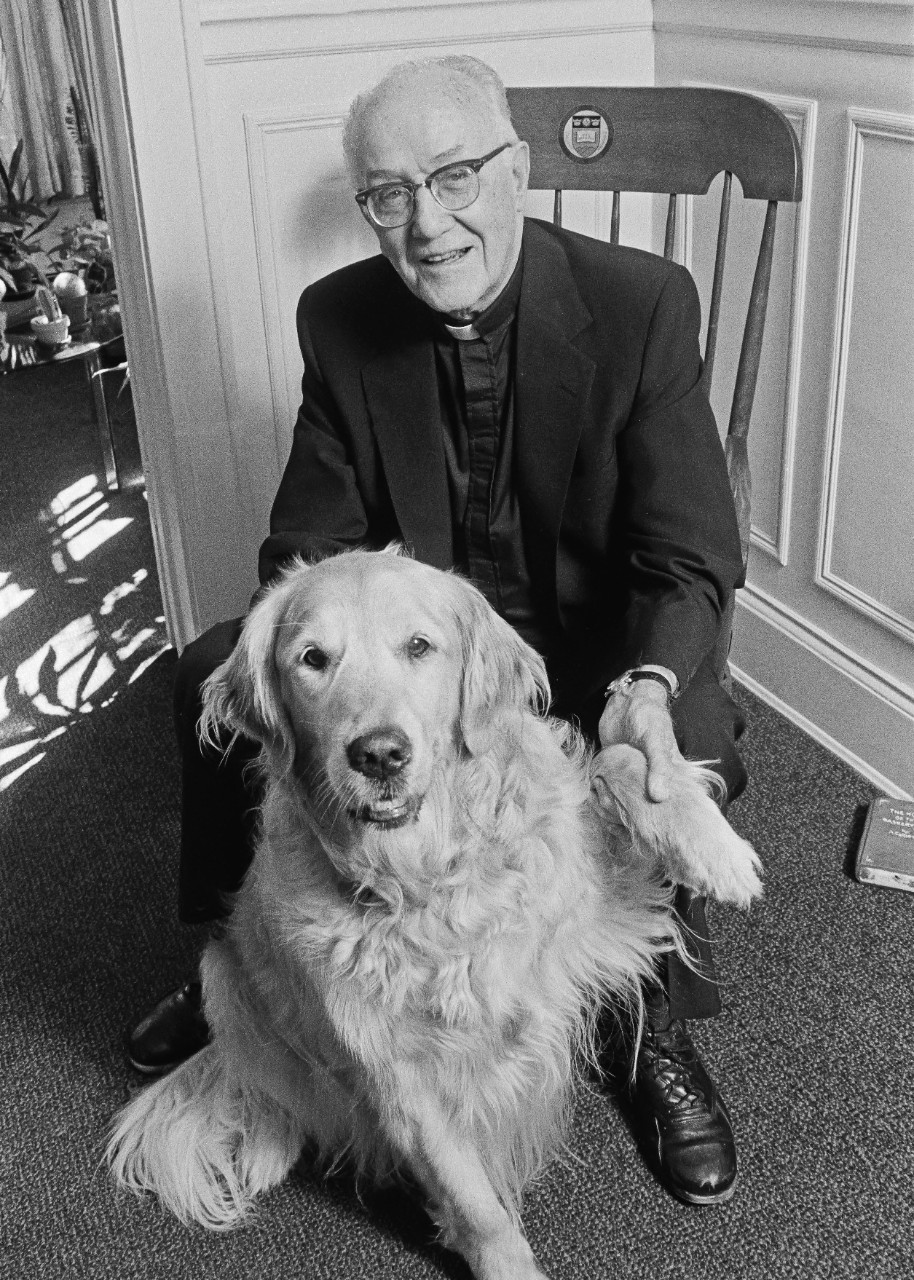 Rev. Charles Donovan, S.J., a Fultonian and author of this history of the Society.

"And now the Forum at University Heights beckons alluringly to the embryo orators, the shadowy forms of Demosthenes and Cicero hover like guardian genii over the rostrum and seats where, like the Senators of ancient Rome, the sages of succeeding generations will assemble to discuss the problems and shape the destiny of our country, to perpetuate the glories of the past, and by their deeds to make the Fulton of the future a credit to its traditions, to its founders, and to the Mother under whose guidance it has reached its place of honor among debating societies of this country."
—description of the Society in the 1913 edition of Sub Turri (the yearbook)

These words seem an appropriate tribute to the long and distinguished tradition of forensics at Boston College. Shortly after the institution was founded in 1863, a "Senior Debating Society" was formed over which Rev. Robert Fulton, S.J., presided. Under this name the Society continued its work until 7 November 1890, when, acting upon the suggestion of the Rev. A. J. Mullan, S.J., the Society voted to be known as the Fulton Debating Society of Boston College. A seal was chosen, and a Fultonian was entrusted the work of engraving it. The design embodied "an eagle surmounting a scroll and a shield containing the portrait of Father Fulton, surmounted by a laurel wreath, the name of the Society at the base of the scroll, the date of its foundation set in a rosette at the lower part of the wreath, and the space between the upper portion and the arms of the same filled by the motto 'Par Pari.'"

Throughout the early years, most of the Society's activities were debates conducted in a room reserved for members of the Society. Advocates were selected and each week they squared off with passionate dialogue. One of the most significant events of this era undoubtedly occurred in 1895, when the Fulton debated against Georgetown University in the College's first intercollegiate debate. This rivalry, one of the oldest in forensics, is reenacted each year when the Fultonians face Georgetown in tournament competition.

In 1913, after the College had relocated to Chestnut Hill, the Fulton was honored with its own room in University Hall (now room 305 in Gasson Hall). Perhaps most significantly, the front wall of the room was adorned with long columns to record the winners of the Fulton Prize Debate. In a prophetic statement about the future prosperity of the Society, the wall provided a place to acknowledge the winner of the Fulton Prize Debate up to the dawning of the twenty-second century. The ceiling was adorned with the words of great orators to "shed light" on the members of the Society. On one side, Demosthenes, Cicero, and Webster, in recognition of the civil; opposite them, the names of St. Paul, Bourdaloue, and Segneri, in recognition of the spiritual.

Throughout the 1920s, the Fulton continued to stage intra-Society debates on campus and to battle other institutions in public debates. The records of the Society reveal lists of opponents much like a modern day athletic schedule. Early opponents included Fordham University, Connecticut Agricultural College, Brown University, New York University, Gettysburg College, St. Viator College (of Illinois), Rutgers University, Stanford University, Johns Hopkins University, Dartmouth College, Princeton University and the University of Pittsburgh. Perhaps the most legendary of these debates occurred in 1928, when Neal Scanlon, William Killion, and Joseph Doyle, defeated Harvard in a debate before thousands in Symphony Hall on the question of whether "Alfred E. Smith is eminently qualified as President of the United States." The strength of the Society in this era was evident in 1929-1930, when the Fulton won nine consecutive debates before losing in the final debate of the year to the College of the Holy Cross.

This tradition continued into the 1940s as Fultonians traveled throughout Boston and surrounding states staging debate exhibitions. The Fultonians delighted crowds by orating on issues of pressing public concern. Around this time, intercollegiate debate began to evolve to a tournament format. Instead of staging intersquad competitions or debating against a single school, colleges and universities began to invite several opposing institutions from across the country to their campus for weekend tournaments. Teams representing the competing schools debated against each other in a series of preliminary rounds with the outstanding teams advancing into the elimination rounds. This trend culminated, in 1947, with the creation of the National Debate Tournament.

Editorial Note: This history is abstracted from an "Occasional Paper" written by Rev. Charles Donovan, S.J., in 1991. Father was a Fultonian who later rose to become Academic Vice President of Boston College. Although he lost the 1933 Fulton Prize Debate to Charles M. O'Brien, Father remained a devoted champion of the Society until his death in 1998. After retiring as Academic Vice President, Father went on to serve with distinction as University Historian and in this role he authored the definitive history of the Society.