As we spotlight the Carroll School’s 2020 finance webinars, we take a moment to learn more about perennial Finance Conference co-chair and moderator Dan Holland ’79. In introducing keynote speaker Nick Burns ’78, Holland said that Burns’ resume made him feel like “an underachiever,” but as you’ll see below, Holland’s own achievements speak for themselves.

He was what they called a “lumper.” Down in the hold of a commercial fishing vessel, clad in oilskins and wielding a pitchfork, Dan Holland unloaded tens of thousands of pounds of fish into basket after basket. Then he led a crew loading crates of the fish onto tractor-trailer trucks that would fan out from Provincetown, Massachusetts, bound for market.

That image does not likely spring to mind nowadays when Goldman Sachs clients meet Holland—clean-cut, sporting the tailored suits that are standard in Boston’s Financial District—in his capacity as the firm’s managing director of private wealth management for New England. Nor does Holland smell of the sea when he’s moderating a panel at the Boston College Carroll School of Management’s Finance Conference or chairing a meeting of John and Linda Powers Family Dean Andy Boynton’s Board of Advisors.

But “I did a lot of things that aren’t on my resume,” Holland says, on his long road to success in investment management. Today his role is “to interpret geopolitics and economics and apply it to our clients’ portfolios,” he says. It’s a challenge that he enjoys. “I just find it intellectually interesting.” And he brings to bear all the economics learning he received on the Heights. (Holland earned a bachelor’s degree in economics from BC’s Morrissey College of Arts & Sciences in 1979.)

There are limits to forecasting, however. “Unlike in engineering,” says Holland (who started and maintained propulsion engines on a Spruance-class destroyer, among other duties, in the U.S. Navy), “in finance you never really solve the problem. Investing is making decisions based on incomplete information. You never really get to closure on a lot of things, because there are just so many moving parts.”

In other words, finance—just like Holland’s career—has never been easy. But that’s what makes it fun. 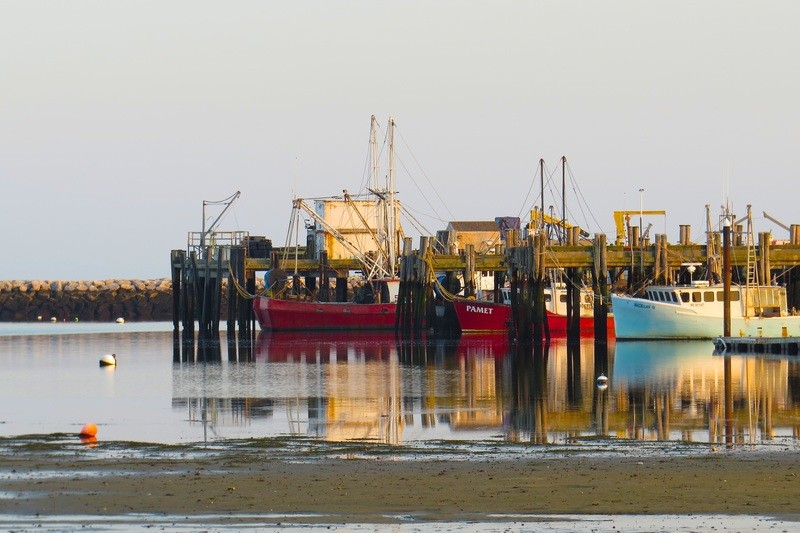 Holland spent summers working in the commercial fishing industry on Cape Cod while he was a Boston College student.

Growing up outside Hartford, Connecticut, Holland spent summers on Cape Cod, where as a teenager he was first mate on a charter boat that sailed out on recreational fishing trips. As a Boston College student on break, Holland would return to the Cape to work in the commercial fishing industry. “I got paid four dollars for every thousand pounds [of fish] that I unloaded,” he recalls of those summers.

Back in Chestnut Hill, Holland enjoyed his economics major but also appreciated the required Core courses such as history, philosophy, and theology, “things I probably never would have taken otherwise but that help you become a more well-rounded individual.”

After graduation and another summer as a lumper, Holland trekked inland to Stowe, Vermont, to be a bartender and a ski bum. But that winter of 1979/’80 was a poor one for snow. “It was skiing on rocks and blue ice,” Holland says. “When mud season came, I found an ad in Yachting magazine: Someone wanted a sailboat delivered from Palm Beach, Florida, up to Boston. So I took a few months and helped him sail his boat up the coast.”

“Then,” Holland recalls, “I figured I’d better do something serious.”

The Cold War and beyond

Inspired by the Herman Wouk book The Winds of War, Holland joined the Navy. He would spend four and a half years on active duty, attaining the rank of lieutenant. Out of San Diego, Holland’s destroyer embarked on Cold War missions long and short. On one deployment up the coast of Alaska, the ship shadowed Soviet intelligence vessels who were trying to track U.S. submarines.

A sign of the changing nature of threats from abroad came during a deployment to the Persian Gulf. Iran’s Ayatollah Khomeini had threatened to send small Cessna planes full of TNT to attack U.S. ships.

“We went up into that area to sort of call their bluff,” Holland recalls. “What was interesting about it was that our ships and weapons systems were designed to fight the Soviets, like to stop a missile coming in at Mach something over the horizon.” The promised small planes, on the other hand, would be flying under the radar. “You couldn’t really detect them until the last minute. So it was back to kind of World War II technology, mounting 50-caliber guns up on the signal bridge” and keeping those guns manned 24–7. Fortunately, that attack failed to materialize.

Later, during the subsequent four and a half years that Holland spent in the Navy Reserve as an intelligence officer, it became clear that the Soviet economy was collapsing. The annual “war game” drills that Holland took part in shifted from simulating World War III scenarios to Third World flare-ups.

Active-duty service, however, had gotten harder to handle when Holland and his wife, Deborah, started a family. Discharged from the Navy in 1986, Holland enrolled in business school at Wharton.

“The weekend of orientation,” Holland recalls, “my second son, Ryan, was born.” Daniel was 10 and a half months old. “So I had two kids under the age of one, and because I had left the Navy, we didn’t have any health care coverage.” The Hollands had to take out a loan from the hospital, making monthly payments for three years. “We paid him off on his third birthday!” 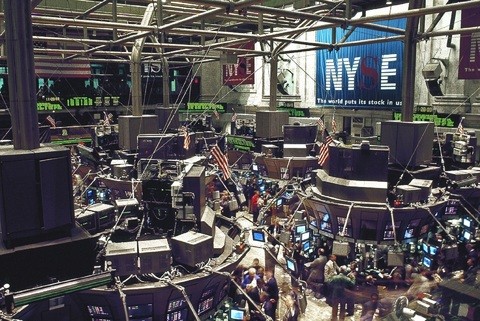 The New York Stock Exchange trading floor on Wall Street during the 1980s, when Holland worked at Kidder Peabody.

Holland landed an internship, and then a part-time job, in the fixed-income division at Kidder Peabody on Wall Street. “Fixed-income was the Wild West back then,” he remembers. “It wasn’t exchange-traded; it was over-the-counter. Price discovery was at the trader’s desk.” The scene on the trading floor was straight out of a movie. “People yelling and shouting . . . It was just a very fun environment to work in.”

Nevertheless, that was a stressful time. “I was working three jobs,” says Holland, whose family would eventually grow to four children. “I worked at Kidder Peabody on Fridays; I was still in the Navy Reserve, one weekend a month and two weeks a year; and I sold advertising in the Wharton facebook” (the class directory). All while taking a full graduate course load and sharing parenting duties with his wife, who worked as a nurse.

The stress didn’t end after Holland graduated in August 1987 and began work in the fixed-income division of Goldman Sachs in Boston. That October, while Holland was in New York for the firm’s training program, the stock market crashed. The Dow dropped 508 points (22 percent) on October 22, the steepest one-day percentage drop in history.

“The morning of the crash,” Holland recalls, “I flew up to Boston to close on my first house, in Needham. I’d taken whatever savings I had, which wasn’t a lot, and leveraged myself up to the hilt to buy this house. Signed the papers, bought the house, and flew back to New York to continue the training program,” all in the same day.

“I walked out onto the trading floor,” Holland continues, “and the mood was just unbelievably sobering. I thought I’d be fired, my career had ended, and I had these two little kids and had just bought this house, I was in debt up to my ears. . . . It was very disconcerting.”

Holland didn’t get the axe that day, or that week. Still, he says, “For the next three years, I came in every day worrying about whether I’d have a job.”

Steady hand on the tiller

Turning that worry into motivation, Holland hung on, worked hard, and rose through the ranks at Goldman Sachs. By the turn of the millennium, he was chief operating officer of fixed income, currency, and commodities sales for North America. He has run private wealth management in New England since 2010, advising ultra-high net-worth families and some small institutions.

Other market changes have been wrought by globalization, Holland says, “and geopolitical risk seems increasingly challenging to handicap.” But he still credits his BC studies with helping him assess markets. “The economics background was a solid underpinning for a better understanding of finance,” he says, while the well-rounded curriculum made him better able to understand people. 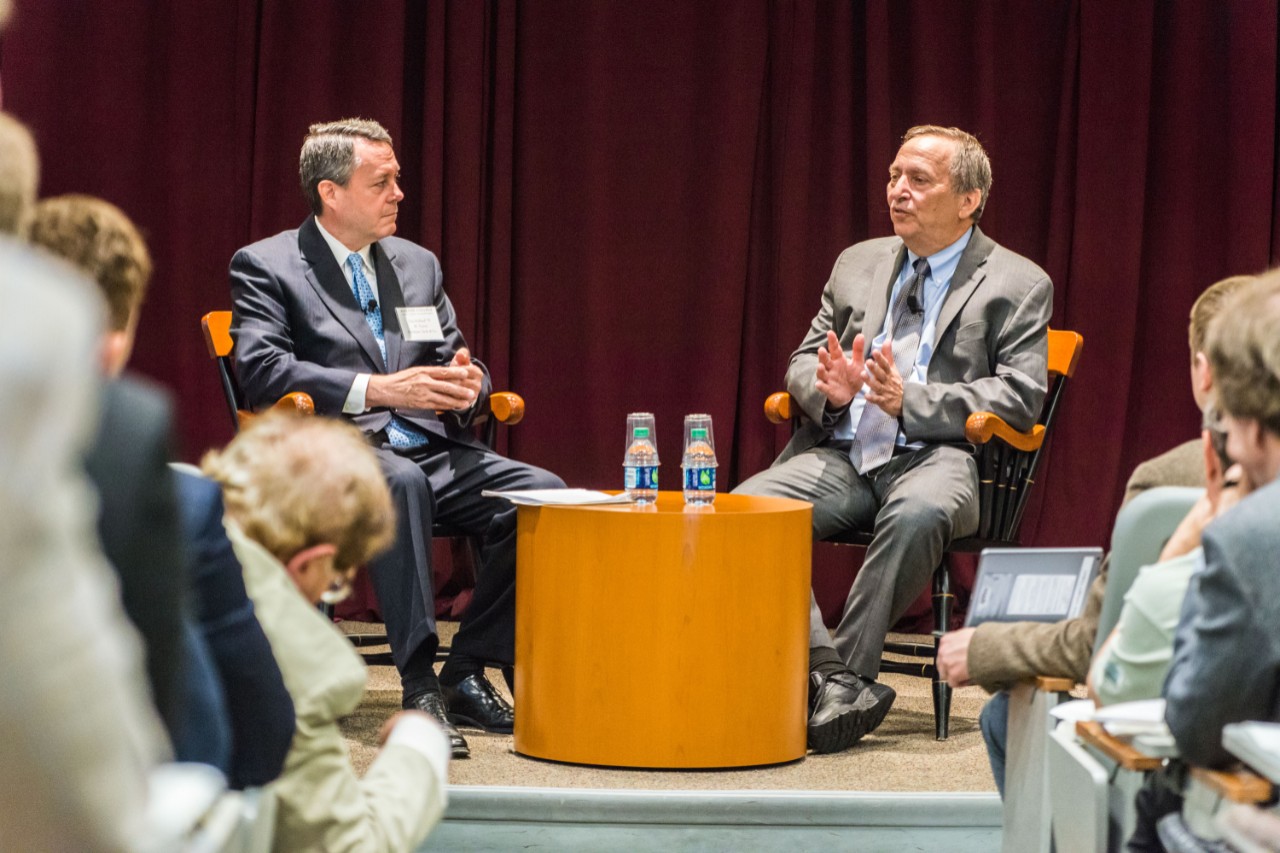 That’s one reason Holland has maintained close connections with Boston College, in particular with the Carroll School, where two of his sons studied—Daniel, ’07, MBA’12; and Ryan ’08. He’s excited about the school’s momentum under the leadership of Boynton, who recently asked Holland to chair his Board of Advisors. The board is tasked with bringing the perspectives and needs of employers to curriculum decisions.

“It’s fun to be a part of these discussions on themes and trends in industry,” says Holland. “And to see the School’s growth in the past decade. I mean, Andy started from a good place, but he’s really taken it to the next level.”

“There’s so much intellectual capital at Boston College and the Carroll School, and the finance department in particular,” says Holland. “The conference is really an opportunity to showcase some of this talent to the rest of the world. And we’re fortunate to be able to attract some pretty high-powered speakers.” For example, former U.S. Treasury secretary Larry Summers delivered the Daniel E. Holland III Keynote Address at the conference in 2016.

Serving those who served

Holland is not only active as a BC alum; he’s also active in veterans’ affairs. For one thing, he is an overseer of the USS Constitution Museum. (His son Ryan, who has also served in the Navy, spent some time as a commissioned officer aboard “Old Ironsides.”) He’s a trustee and treasurer of the Naval War College, in Newport, Rhode Island; and a member of the Boston chapter of Business Executives for National Security, a group that meets national defense challenges with private-sector expertise.

Holland also used his professional know-how to help steward the finances of the New England Center and Home for Veterans, in his role on the board of that nonprofit organization. The center provides transitional housing for veterans in need.

“If you’re trying to get a job and get back on your feet, one of the most important things is to have a place to live,” says Holland. “Like in any population, there’s a subset that falls on hard times and falls to the bottom. They just need a little extra help. These are folks who have served our country, and you want to try to be supportive and help them help themselves.”

“I think BC, through the Jesuit foundation, helped form that mentality of giving back to the community,” adds Holland, who has also endowed a Boston College scholarship. “I feel passionate about giving back and making sure others have the opportunities that I did. It all ties in.”

—Patrick L. Kennedy, Morrissey College ’99, is a contributing writer at the Carroll School of Management.