More than a Meal

Clouds of greasy smoke greet the professor as she enters the dorm suite. The haze is wafting from the kitchen, where Lauren Kaufman ’18 has just pulled a tray of chicken parm cutlets out of the oven.

“Maybe we should open a window,” suggests Amy LaCombe, a professor of the practice who teaches accounting and is a member of the Portico faculty.

Soon, the smoke clears, and a table is spread with a buffet—the cutlets plus spaghetti, biscuits, and cookies. There are little to no veggies apparent, apart from the tomato sauce on the chicken parm. But the 11 students milling around Kaufman’s suite in Rubenstein Hall on an evening toward the end of the fall semester are not here to check off dietary requirements. As LaCombe’s Portico teaching assistants over the past three years, they’re here to share a meal, yes, but also for the chance to hang out with a favorite professor outside class and office hours—to shoot the breeze with LaCombe about work, relationships, and whatever else. 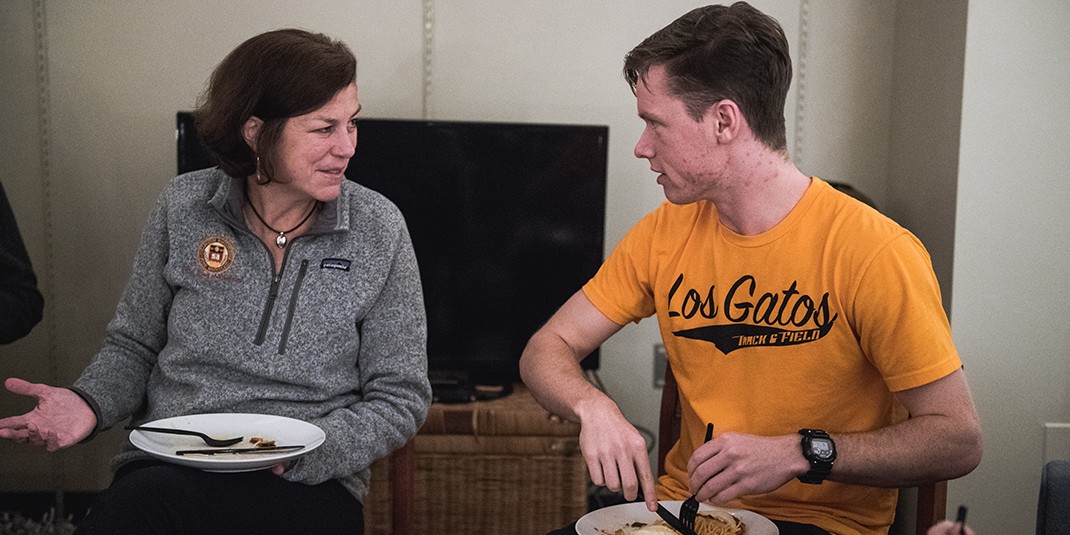 The impetus for the gathering is the Carroll School’s Take Home Prof program. Run by Assistant Dean for Academic and Student Services Erica Graf, the program reimburses students (sophomores, juniors, and seniors) up to $100 to buy groceries and cook a meal for a Carroll School professor and classmates. If they don’t live in a dorm with a kitchen, students may use the allowance for takeout or delivery.

“We started this program to increase interaction between students and faculty,” Graf explains. “It helps students create more mentoring relationships, to step outside the classroom and talk about things beyond academics, to connect with faculty on a different level. . . . These are the types of relationships that people want to walk away from college with. And it doesn’t always happen naturally.”

Up to 13 professors can be invited to dinner per semester, and there’s always a wait list, says Graf. “Students have put together menus and really elaborate dinners that they put a lot of thought into. They make sure their dorm is all clean. And it’s a great experience for professors too. When else would they get to visit a residence hall? This opens that door to them, and they talk about the housing experience or their lives outside work.” 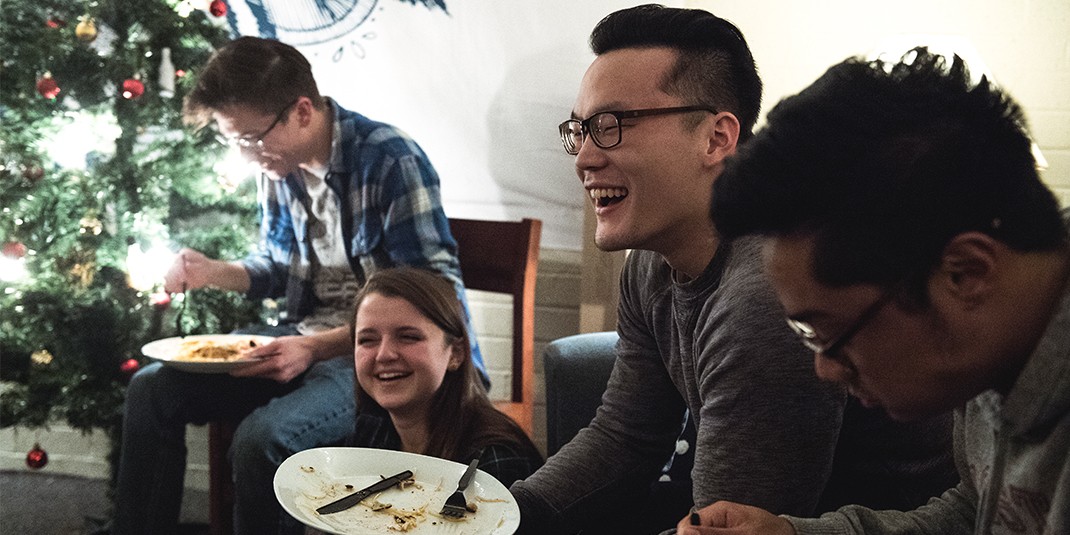 In Rubenstein, LaCombe and the students have piled food onto their plates. Everybody heads out to the living room to take seats in a rough oval around the coffee table. A cheery Christmas tree lights up the room, and several lively conversations crisscross the table, making for a happy cacophony.

Talk is of internships, travel to India and Guatemala, and extracurricular activities from soccer to singing. (Lee, an a cappella singer with the Boston College Dynamics, resists entreaties to give a solo performance.) And since all have served as TAs—“the best TAs of the past nine years,” LaCombe says—they swap stories of freshmen with a lot to learn, like the kid who woke up five minutes before a class, took an Uber there, and only then learned that the session had been canceled. There’s also gossip about dating and even the long-term potential for a couple who met in the Mods—which leads to a question about investing clerical authority in the professor present:

“Amy, will you officiate a Mod wedding?”

Everyone in the room (not counting a visiting writer and photographer) is well familiar with LaCombe’s research, such as a case study on the Boston Beer Company’s 2008 recall of 25 million Samuel Adams beer bottles after the discovery of a defect that could have resulted in bits of glass breaking off and floating in the brew. That explains the riotous laughter when a student jokingly asks if anyone wants a Sam, and Kaufman responds, “Is there broken glass in it?”

A finance and operations management student who will be a technology audit analyst at JPMorgan Chase next year, Kaufman earns praise for the cleanliness of her six-person suite. “Thanks,” she says. “There’s a schedule. That’s how it works.” Indeed, a color-coordinated chart on the wall determines which roommate performs what chore (e.g., “Swiffer”) on what day.

The meal, however, was not a team effort. A diner asks Kaufman who baked the tasty cookies.

Journeys through the woods

“This is the best getting-lost-abroad story.”

It’s a few weeks earlier. Five men in a Mod polish off a meal of steak and potatoes. The table’s guest of honor is Assistant Professor of Information Systems Peter Sterpe. The topic right now is study-abroad experiences. Zach Wilner ’18 and Tucker Charette ’18 recount the time they met up in Dublin.

A friend of Wilner’s from his internship invited him to his family home in a Gaelic-speaking region in the west of Ireland. Charette and several other Boston College students went along. Riding a bus farther and farther out into the countryside, they misread the sign at a bus station and got off one stop before they needed to. At the station, they were told they could wait an hour for the next bus, “or you could walk along the river” to their destination.

“It was like something out of a fairy tale,” recalls Charette, who studies information systems and finance and will be working in operations product innovation at the online furniture retailer Wayfair. The students made their way down a dirt path through the woods. At some point, they met an old man who lived in a tiny house along the riverbank. “Long, white Santa beard,” says Charette. “Camo jacket. And he had a pet stork.”

Passing through a field filled with pretty yellow flowers, some of the young women in the group picked the flowers, then got a rash. In the village at last, the group entered a tiny pub filled with old-timers. “All the locals looked at us like we were from outer space,” says Wilner, an information systems and business analytics student who is an incoming business intelligence analyst for Wayfair. “And when we met my friend and told him about the girls’ rash, he said, ‘Oh! If you pick this other type of flower and rub it on the rash, the rash goes away.’”

“Like something out of a fairy tale,” Charette says again.

As for Chris Maione ’18, after his semester in Berlin, he still practices his German whenever his roommates play the video game Call of Duty: WWII. “He’s translating for us,” says Wilner, “the conversations of the background characters, as if we even care. He’s not even playing the game anymore, just crouching in front of the TV, listening.”

Tyler Raymond ’18 studied in Melbourne. “So can you speak Australian now?” Sterpe quips.

Sterpe proves an excellent dinner guest and conversationalist. “What’s the big thing?” he prompts, and the seniors share their latest news—job offers, interviews, new coding skills. “What’s everyone’s first or worst gross job?” Sterpe asks, and tales of toil in dining halls follow. The professor talks about his new house, “way out in the woods,” he says. “I’ve always said the commute is worth it if your home is a refuge. This is a test of that.” The young men recall their fathers’ commutes of various lengths, and perhaps they file away these variables and Sterpe’s perspective for consideration later—on this and sundry other matters.

“It’s a good way to hang out with a professor outside of class,” Wilner said earlier this day while shopping at Star Market. (He’s hosted Take Home Prof dinners before.) “They’re interesting people, and you get to talk about things other than an upcoming test.”

“Gentlemen, this is a great dinner,” Sterpe proclaims upon finishing his steak. “Thank you.”