Cold Cuts and the Courage to Fail

CEO alum speaks candidly of “unmitigated disasters” as part of the popular Lunch with an Entrepreneur series. 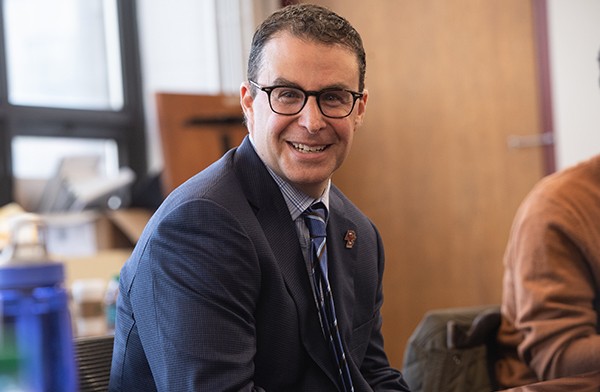 “I’m not here to tell you about how wonderful I am,” said Brett Heffes ’89, CEO of Winmark. “That would be a pretty short talk.”

Heffes’s self-effacing remarks clashed with the graph projected on a wall screen in a small classroom in Cushing Hall, where he spoke to about 20 Boston College students one Thursday afternoon last month. With a thick line tracing a jagged but steep mountain climb to the right, the chart showed the up-and-upward trend of Winmark’s stock over the past 16 years, since Heffes joined the company as chief financial officer and treasurer in 2002. (He was named CEO in 2016.)

Winmark is a franchisor of used-goods stores. What started as hardly more than a garage sale in the 1980s is now second only to Goodwill Industries in its share of the used-goods market, and ahead of the Salvation Army. The company owns several chains, including Play It Again Sports, specializing in sports equipment, and Style Encore, specializing in women’s clothing. And Winmark has done very well under Heffes’s leadership.

“This slide looks great,” Heffes said. “But it ignores all the trouble that happened along the way.” Not so much in his time at Winmark as in the overall arc of Heffes’s career. The twists and turns a business professional encounters in real life—and more important, how he or she deals with them—was the theme of Heffes’s talk, “On the Brink of Failure.”

Heffes was one of more than a dozen entrepreneurs to visit campus this past fall for the Edmund H. Shea Jr. Center for Entrepreneurship’s Lunch with an Entrepreneur series. For example, Sophie Miller ’07, talked about her rise to head of partnerships in business development at Google. Priscilla Tyler talked about fellowship opportunities at her investment firm, True Ventures. Sam Spector ’85, M.B.A.’97, vice president and partner of the global Workday practice at IBM, spoke candidly about how “nobody is entitled to anything, at any point in their career,” imparting lessons on hard work and adding value daily.

“I learn something new every time,” said Chanwoo Lee, an exchange student from Seoul University who is studying computer science at Boston College this year. During the fall, he attended most of the Shea Center lunches, which are held in Cushing Hall and began with the center’s founding in 2015.

A series of setbacks

Part of the value of a Lunch with an Entrepreneur is that current students hear firsthand from a now-successful executive who once walked in their shoes. When Heffes spoke, as students sat around the room’s boardroom-style table and munched on thick half-sandwiches of cold chicken or tomato and mozzarella, he showed them a clipping from The Heights, the BC student newspaper, of September 26, 1988. The story concerned “two typical college students”—Heffes and a friend from his hometown in New Jersey—“sitting around, watching the Tyson-Spinks fight and taking it easy, when they began talking about how they could make some money.”

The pals’ idea turned into a business, Campus Care Package. The pair sent catalogues to addresses in wealthy neighborhoods and assembled care packages for parents to send to their kids at college.

“It didn’t work out well,” the now-51-year-old Heffes revealed at the Shea Center lunch. In fact, “it was an unmitigated disaster.

“So I had setbacks,” he continued. “I got an early dose of humility. . . .But this created in me some resiliency.”

That resiliency served him well during later setbacks, which he attributed to his own mistakes.

“I had a position at Smith Barney, which is now Citi, in investment banking,” Heffes related. “Meeting with CEOs, flying around the country—a high-level job for a young person. But I was burnt out on New York City. So I made a bad decision.” Heffes traveled to Newport Beach, California, for a job interview.

“I saw the beach out the window,” he said, “and then didn’t hear a word about the job from the interviewer. I just said yes. I didn’t perform due diligence. And it was a disaster.”

Lesson learned? “Run toward good opportunities, not away from bad situations,” said Heffes. “You can always leave a job or a school—but make sure you’re being thoughtful and doing it for the right reasons.”

A few months later, in 1992, Heffes landed a job back in investment banking, but in Minneapolis, where he’s lived ever since. When he started a family, Heffes left that industry and soon became the chief financial officer for a technology startup.

But while that experience was not a financial success, Heffes said, it was a professional success. “I got my first experience as a CFO.”

One more bit of turbulence was still in store for Heffes before his run of success with Winmark. He was hired as the CFO for another technology startup, then quit after 45 days. “There were things I didn’t like from an ethics standpoint,” he said. “I had ignored all the warning signs about the management team.”

An M.B.A. student in the Cushing classroom pressed Heffes for more details, and he obliged. “The CEO asked me to do a cash flow projection, and we realized we’d be out of money 11 months sooner than we thought,” Heffes recalled. “I wasn’t comfortable with the business plan he was putting forward.”

“That must have been a hard conversation,” the student suggested.

“It was hard,” agreed Heffes. “But I couldn’t do what he was asking—go to people I knew and try to raise money with a business plan I didn’t believe in.”

The takeaway: “Learn how to properly evaluate risk.” Heffes hadn’t fully weighed the risks inherent in ignoring those warning signs while considering taking the job, he said.

“How do you know if you’ve properly evaluated risk?” another student asked.

“You don’t know until it’s over!” Heffes answered with a laugh. “If you never commit, you’re over-evaluating. If you jump into everything, you’re underevaluating.”

It can help to find a mentor, Heffes added. “Make connections with people older than you—non-family professionals. Say, ‘Hey, I’ve got this job offer,’ or ‘this business plan,’ and ask their advice. Ultimately, you have to own the decision, but get some data first.”

As is customary with Lunch with an Entrepreneur guests, after Heffes concluded his talk and Q&A, he stuck around and met with any and all students who wanted to introduce themselves or ask him questions not for public consumption. (Some of the speakers this fall even held official “office hours” the day of the luncheon.)

As the crowd trickled out, Chanwoo reflected on the various Lunch speakers he’d heard this semester. “There are so many different paths to success,” he said, adding, “of course, we know this in theory. You can read this kind of stuff in self-help books. But it’s a totally different feel when you hear it in person from someone with real experience in industry.”

“I feel it’s my responsibility to give back,” Heffes said earlier, when asked why he returned to the Heights to speak with students. “It’s easy to give money; it’s more important to give of your time and resources. And if I can help one student, it’s all worth it.”