An alum took a chance, found an industry he loved, and is now one of its biggest players 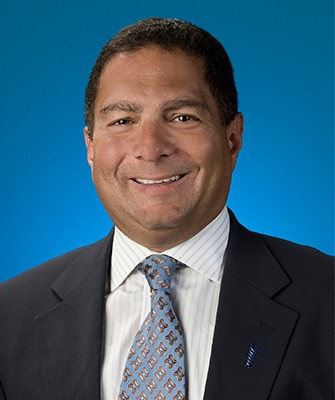 “It was a bit of a fluke,” says Joe Essa ’79. That’s how he describes his first step on the road to becoming a successful restaurateur and a managing partner with celebrity chef Wolfgang Puck, overseeing more than 50 eateries across the nation as well as the licensing of Puck’s cookbooks, canned soup, and other consumer products.

And no, that “fluke”-y first step was not Essa’s teenage job in a fried chicken joint in his hometown of Greensboro, North Carolina. “I was really bad at it,” he told a class of graduates of the Culinary Institute of America in 2015. In fact, he admitted, “I got fired. And my father owned the restaurant, so that wasn’t a good sign.”

Nor was it his job at Father’s, the Boston bar, where he worked nights while earning his bachelor’s degree on the Heights. In fact, when Essa graduated from the Carroll School, he figured his days in hospitality were behind him. For the next four years, he happily worked as a certified public accountant for Peat Marwick Mitchell, in San Francisco.

But in 1983, the firm transferred him back to the East Coast. Almost simultaneously, his father took ill, and Joe Essa returned to Greensboro. While there, he was approached by a friend with a proposal. A real estate developer, the friend needed a restaurant to complete a shopping center project.

“I ended up opening the restaurant,” recalls Essa. “I fell in love with the business, and I never looked back.”

Café Pasta was Greensboro’s first casual Italian restaurant, and success was never a given. The hospitality industry is not for the faint of heart—many eateries fail in their first year (though not “90 percent,” a widely spouted but spurious figure). The curriculum Essa learned at the Carroll School helped him keep Café Pasta on a steady course.

“I always drew upon my accounting training,” Essa says. “I knew you had to end up with some money in the bank! So I was very disciplined in that regard from day one.”

But the young pasta purveyor needed to know so much more than the books. “For the most part, I had to learn as I went,” he says.

For example, one wine distributor “recognized that I had some passion but probably not a lot of knowledge about that part of the business,” Essa recalls. “He’d come spend time with me to explain things and help me develop a wine program that was interesting, reasonable, and profitable.”

“I always drew upon my accounting training. . . I knew you had to end up with some money in the bank! So I was very disciplined in that regard from day one.”

Another learning experience came courtesy of a friend who owned a restaurant in Boston. “He invited me to come up and work, teaching me everything from washing dishes the right way to butchering to picking the right kind of produce, fish, and meat, to service,” Essa says. “I’ve been the beneficiary of great friends.”

Not to mention family, he adds. At one point or another, most of Joe Essa’s seven siblings worked at Café Pasta, and their mother made the desserts. Joe’s younger brother Ray runs the restaurant today and it remains a fixture of Greensboro’s food scene as well as the go-to caterer for retired basketball star Michael Jordan, who lives in the region.

In 1988, Joe Essa traveled to New York for a grad school interview. He stayed that weekend with a former Boston College roommate who had become a lawyer—one of whose clients was selling a restaurant in West Hartford, Connecticut. Long story short, “I ended up with another restaurant,” says Joe, who sold his share of Café Pasta to Ray and moved back up to the Northeast.

Working hard to learn even more about Italian cuisine, Joe Essa took classes in Florence, Italy. He networked with other restaurateurs around the U.S. That led him to positions of increasing responsibility in restaurant groups in Manhattan and Arizona.

At last, Essa went to work for Wolfgang Puck in 1999. Grocery shoppers and TV viewers might recognize the celebrity chef from soup cans and cooking shows, but there’s a lot more to his brand. A native of Austria, Puck rose to fame in Los Angeles with his restaurant Spago, a popular spot for Hollywood stars. Beginning there in the early 1980s, Puck pioneered gourmet pizza, California cuisine, and Asian fusion cuisine. Today, his various businesses include scores of restaurants in hotels and airports, as well as frozen pizza, cookbooks, cookware, appliances, and other branded consumer products.

Essa started out in Puck’s fine dining group, where he managed the operations for 26 restaurants around the world. Since 2008, Essa has been president, CEO, and board member of Wolfgang Puck Worldwide, which under his direction has grown to encompass more than 50 casual and fast-casual eateries, as well as Puck’s consumer products.

It’s a unique challenge, being responsible for licensing products with the boss’s name and face emblazoned on them. However, says Essa of his relationship with Puck, “We work very closely. Our offices are next to each other,” in Puck’s corporate headquarters in Beverly Hills. “We talk about everything. There’s nothing I’m not comfortable running by him, and he always has great ideas.”

The variety built into the role “makes for work that doesn’t feel like work,” Essa says. “It’s not just one kind of dining, it’s many different kinds of restaurants, different cuisine. And then looking into the leases, license agreements, and marketing and promotion for all those businesses. And the people you get to meet along the way are fascinating. You get up every day and it’s different, it’s exciting, and it’s humbling. I just count my blessings.”

It helps that the core of the business, food and hospitality, is something that Essa remains passionate about. He advises any current Carroll School students who might read this to find the industry that fires them up. “That passion will be obvious and contagious to everyone around you, and that, I think, generates great leaders.”

Essa is today the vice chairman of the National Restaurant Association. When he gets to visit Boston, he makes sure to eat breakfast—turkey, hash, and eggs—at Charlie’s in the South End, and then at some point to get lobster from James Hook & Co. on Atlantic Avenue.

When strangers learn that Essa works with Wolfgang Puck, they often ask for culinary advice. “Most of the time, I don’t have an easy answer,” Essa says. “I do have an opinion, usually based on mistakes I’ve made.”

That begs the question: If Essa is hosting dinner for friends at home, what’s his go-to dish as a cook? In that case, despite his years running Italian restaurants, Essa sticks to his roots.

“I’m Lebanese,” he explains, “so I typically make a stewed chicken dish with Egyptian spinach and rice, tabbouleh, and kibbe with hummus.”

Patrick L. Kennedy, Morrissey College ’99, is a writer in Boston and the co-author of  Bricklayer Bill: The Untold Story of the Workingman’s Boston Marathon.