Sizing up Markets, Peering into the Future

The stock market may be more fitful than in the recent past, and the political world may at times seem chaotic, but the markets and the wider economy are likely to keep going strong—perhaps for a year or two. That’s according to a roster of financial experts who spoke at the Carroll School of Management’s annual Finance Conference.

“We’re in Goldilocks land right now—not too fast, not too slow. And nothing I see is going to change that,” said Michael Tyler, chief investment officer at Eastern Bank Wealth Management.

Held in the Heights Room in Corcoran Commons, the June 7 gathering brought together approximately 160 scholars, practitioners, and policy makers for a full day of conversations touching on topics such as global investment, tech innovations, and cryptocurrencies. Aside from the upbeat forecasts for the near term, there were some cloudy assessments about the future of economic growth and America’s leadership in the world. 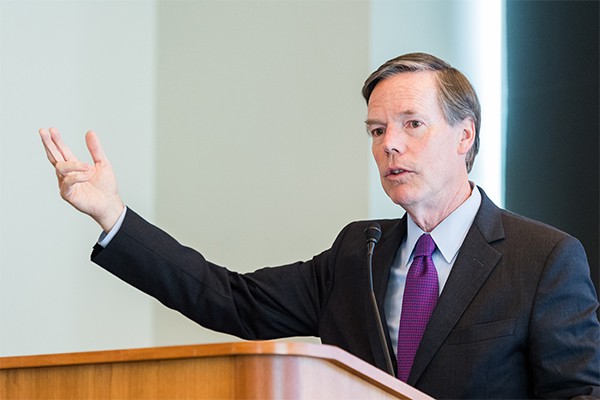 “This is a consequential time, a chaotic time in the country, in a lot of ways,” said Nicholas Burns ’78, a professor at Harvard’s Kennedy School of Government who has served in key foreign policy roles under Democratic and Republican presidents. He delivered the Dorothy Margaret Rose Knight Economic Keynote Address, titled “Challenges to Global Stability and Peace.”

After those sobering comments, Burns served up some good news. He told of his “Great Powers” class at Harvard, in which he asked students this year to give presentations on signs of “strategic hope” in the world. The students analyzed a number of encouraging trends, including data showing that every major economy has grown over the past year, that in the past 30 years the world has seen the “greatest alleviation of poverty” in human history, and that vaccines are on the verge of curing diseases such as polio.

But he added, “Boy, do we have problems.” High on his list of global challenges for the United States is the rising dominance of nations to the East, especially China and India. “There’s no question that by the next century, we’ll be a Pacific world,” Burns said, adding that the United States is not positioning itself (through skillful diplomacy and strategic thinking) for this coming shift in global power.

Burns—a career diplomat who served as President George W. Bush’s U.S. Ambassador to NATO—is even more troubled by what he sees as needless conflict between the United States and its most trusted allies in Europe. “There’s never been so much division and misunderstanding” in that pivotal relationship, he said.

He cited the Trump administration’s so-called “trade wars” with the European Union and other partners including Mexico, Canada, and South Korea. “You have to question the tactical effect,” said Burns. “We’re self-isolating…. We just need to re-center ourselves.” Other challenges he underscored include volatility in the Middle East, seven years after pro-democratic uprisings briefly held out hope in that region (“The Middle East is facing another generation of instability”), and new threats from Vladimir Putin’s Russia (“He invaded Ukraine, annexed Crimea, and threatened Poland”). 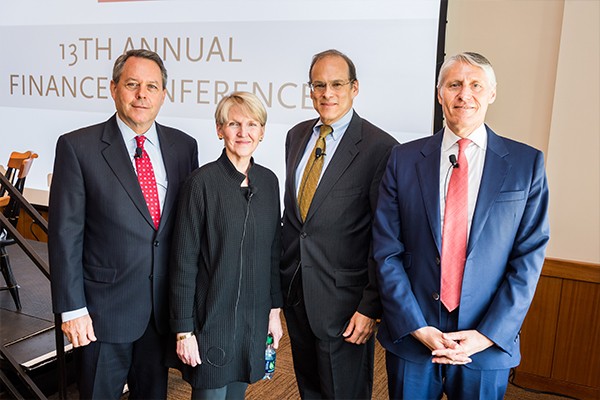 “How do you look at geopolitical risk and how do you price that risk?”

Daniel E. Holland III ’79, managing director of private wealth management at Goldman Sachs & Co., posed the question as moderator of a panel on global investment, following the Burns keynote. Seated next to him on an elevated platform in the Heights Room were Tyler of Eastern Bank; Marc Seidner ’88, chief investment officer of non-traditional strategies at PIMCO; and Kathleen Fisher, head of wealth investment strategies at Bernstein Private Wealth Management.

The panelists agreed that historically, few geopolitical events have translated into long-term market risks. But they also pointed out that nearly a year and a half into the Trump administration, politics is roiling the markets. That wasn’t the case a year ago, when speakers at the 2017 Finance Conference marveled at the serenity of the markets amid turbulence in Washington but also warned of political risks down the road. Now, a single presidential tweet—about the latest trade spat, nuclear deal, or some other flare-up—can make markets tumble or spike.

“The markets are, more than ever, looking for bad news,” said Fisher, noting that the president’s mixed signals on trade relations have contributed to market volatility. “Some of these capricious comments on trade have made it very hard for companies to make decisions.” On the other hand, cooler heads elsewhere in the world—and counted among them were the premiers of Germany and China—have calmed markets in the wake of tweet storms. “When you hear rational and measured responses coming from other global leaders, the markets are rewarded for that,” said Tyler.

Still, the panelists said investors of all sizes and shapes had cause for guarded optimism about markets in the next year or so. They pointed to robust corporate earnings, good-enough economic growth, low inflationary pressures, relatively low (gently rising) interest rates, reasonably valued equities, and other financial tailwinds.

Sounding a cautious note, Seidner pointed out that what politics has recently given to the long-running bull market, by way of tax cuts and financial deregulation, it could also take away after another election year. “We operate in a two-to-four-year political cycle…. We don’t know if any of this is really permanent,” he said, adding that a routine recession is quite possible in the next five years.

Looking Back to the Future 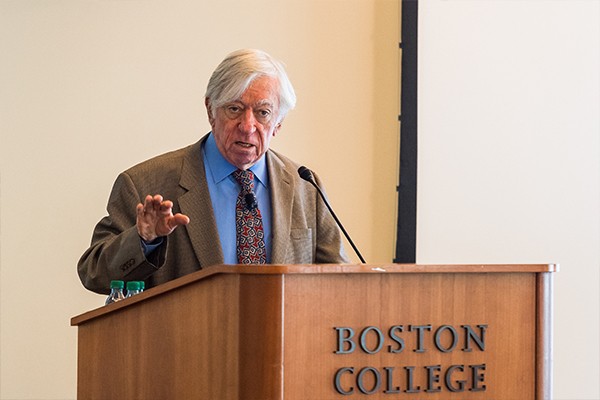 Some of the less sanguine assessments had to do with long-range trends. Robert Gordon, a Northwestern University economist and author of the best-selling 2016 book The Rise and Fall of American Growth, made his case that the quantum leaps of American growth (owing to such historic advances as electricity and transportation technologies) are mostly behind us. He showed a graph that tracked a sizable “slowdown” of productivity growth since 2006, a fact attributed in part to an aging population with fewer workers.

Gordon also raised the startling question of whether productivity gains from recent innovations such as smart phones and the web have already run their course, pointing out that offices use desktop and laptop computers “much as they did 10 to 15 years ago.” And, he delved into other trends related in one way or another to slowing growth. These include worsening income inequality (which means less money for typical earners), a “demoralizing and shocking” step backward in life expectancy among less-affluent Americans, and educational achievement that increasingly lags behind other advanced economies.

Many believe that artificial intelligence (AI) will usher in a high-growth future. Not Gordon, who noted that the most intelligent robots can’t match human dexterity. He cited a much-publicized study finding that two robots taught to assemble an IKEA chair took three times longer to do so than an untrained human. The economist drew laughs when he alluded to Terminator-style killing machines, and said, “If you’re worried about the Terminator, keep your door closed.” 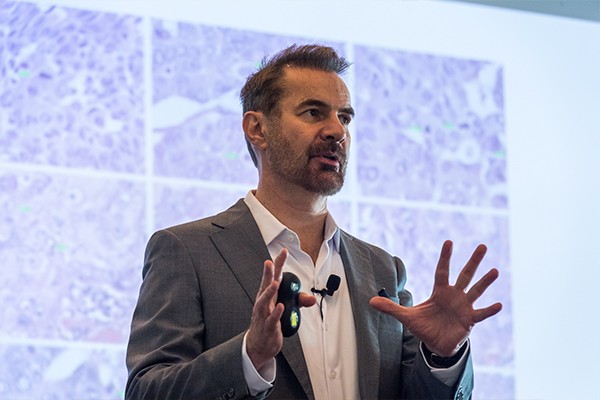 The next speaker, Erik Brynjolfsson of the MIT Sloan School of Management, vouched for Gordon’s data but countered his analysis of AI. Brynjolfsson is the author of another recent bestseller, The Second Machine Age: Work, Progress and Prosperity in a Time of Brilliant Technologies. He acknowledged that it will take a long time for robots to learn how to swiftly assemble the IKEA chair, but that doesn’t mean AI won’t drive innovation and growth in the near future.

For instance, Brynjolfsson pointed to advances in visual recognition that now allow machines to look at X-rays and make medical diagnoses. “Instead of recognizing faces, they’re recognizing cancer, better than radiologists,” he said, attributing this progress to “machine learning” in which the machines figure out things on their own without explicit programming by humans. 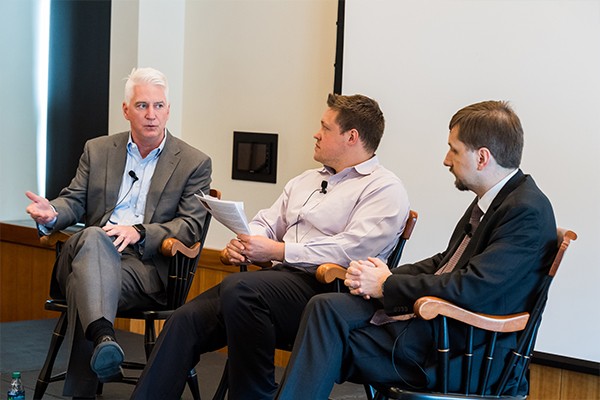 The final session drilled down into another brave new world—that of cryptocurrencies. In headline-grabbing heists, shadowy hackers have reportedly stolen more than a billion dollars worth of digital coins traded on these markets in the past six months.

“Everybody is obviously petrified, and for good reason,” said Daniel Matuszewski, Morrissey College ’10, head of trading at Circle Internet Financial, who moderated the panel that also included Alfred L. Browne III of Cooley LLP and Jakub Duda of Goldman Sachs. Panelists voiced somewhat different opinions on the benefits of a stronger government hand in these largely unregulated transactions, but they agreed that most market participants are looking for “more clarity” from regulators.

The Finance Conference is the signature public event offered each year by the Carroll School, and wide-ranging conversations like these reflect the School’s multi-disciplinary approach to management education, said John and Linda Powers Family Dean Andy Boynton ’78. “We want our students to become lifelong learners, people who look for ideas in many different places,” he said. “We want them to think both deeply and broadly, and to become great leaders for the future.”

William Bole is Senior Writer and Editor at the Carroll School of Management.