Bank to the Future

European bankers are worried. A new EU regulation forces them to hand over account information to third parties upon a customer’s request. These third parties, typically “fintech” startups, can then mine the banks’ data to offer customers budgeting advice and better mortgage deals via easy-to-use apps.

The new rule opens the door to “any company interested in eating a bank’s lunch,” according to some Continental commentators. One trailblazing young company has “smashed open the floodgates of 300 banks’ data,” screams a Business Insider Nordic headline. The entrepreneur behind a digital personal-finance assistant in the UK vows “to take on the banks.”

But where some banks see a threat, others see opportunity. Perhaps with the fresh ideas of some tech-minded millennials, banks can weather the regulatory headwinds—and even offer innovative products that will attract new customers.

Adopting that outlook, Nuremberg-based TeamBank turned to a group of students, composed of three from the Boston College Carroll School of Management and three from Friedrich Alexander University School of Business and Economics in Nuremberg. The students’ mission: to imagine the bank account of the future.

After a competitive application process, the three M.B.A. students that Boston College tapped for the TeamBank-sponsored collaboration were: Derek Brooks, a senior business analyst at Liberty Mutual Insurance; Jess Poracky, an incoming consultant for Gartner, Inc., a technology research and advisory firm; and James Stevenson, an incoming senior associate at PwC. All are class of 2018 (with Brooks graduating from the part-time M.B.A. program, and Poracky and Stevenson from the full-time program). 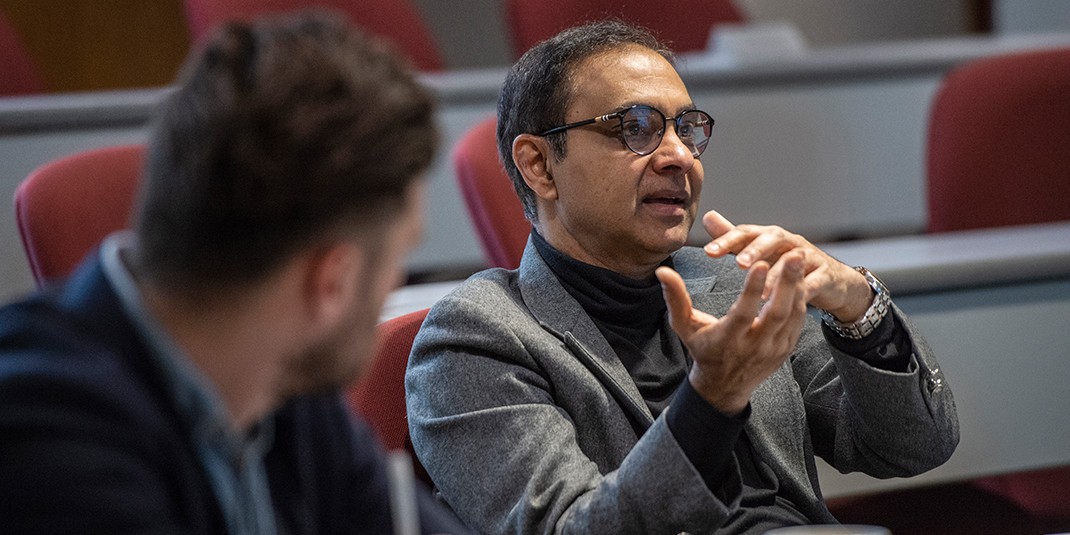 “It’s experiential learning, but it’s a real-life project,” said Marilyn Eckelman of this International Project Seminar, as the for-credit consulting project was called. Eckelman is the Carroll School’s associate dean for graduate programs. “It’s people working together from different cultures,” she added, a business skill that is essential in the 21st century.

In January, the trio flew to Nuremberg to meet their German counterparts, all of whom speak flawless English. The group quickly bonded as they toured sites such as Nuremberg Castle and sampled the local potables and provender. By the end of their week there, Poracky said, “it felt like we’d known them for years.”

And of course, the students got down to business, meeting with the client in TeamBank’s startup-styled new office space. “It has a very Silicon Valley feel to it,” noted Stevenson.

That tech vibe is appropriate to the company’s goal of becoming the pacemaker of banking in Germany. “They really want us to push the boundaries in terms of creativity,” said Poracky shortly after returning to Boston. “The sky really is the limit.”

Back on the Heights, the Carroll School students continued to work remotely with their new colleagues for several months. Under the direction of Associate Professor of Management and Organization Mohan Subramaniam, they held weekly status meetings with the German team via Skype, and they collaborated via Google Hangout and email throughout each week.

As a first step, the students researched the challenge forming the impetus for the project: the European Commission’s Revised Payment Services Directive, or PSD2 for short. The regulation, which went into effect this year, is intended to increase competition and innovation in European banking and finance. Using new digital tools, people might check balances or make payments via Facebook’s messaging app, for example. (They already do that in Brazil.)

And yet consumers are concerned about security, as the BC and FAU students learned in the next phase of their work, conducting surveys and focus group–styled “need-finding workshops.” The goal was to understand the banking habits and attitudes of the target customer segment, millennials. It turns out that for all their comfort with sharing party pics on social media, “Millennials trust banks more than they do the GAFA companies [Google, Apple, Facebook, Amazon],” said Brooks in April. “And this survey was done before the latest Facebook data scandal.”

When it comes to their money, “security is the number-one concern” for customers on both sides of the Atlantic, Brooks said. That might be the strategic advantage that banks hold in the PSD2 era: “Banks are seen as a trustworthy data warehouse—they’re already perceived as an institution people are willing to share data with.”

Nevertheless, convenience is also a consideration for the typical millennial banking customer—in fact, it comes second, right after security, according to the students’ research. This reality fed the final phase of their work, designing the bank account of the future. As more and more people conduct more and more of their business on mobile phones, savvy banks consider it vital that they meet customers where they are. With younger customers, there’s the added social dimension. At least in the U.S., peer-to-peer payment apps such as Venmo enable users to send notes and emojis along with their payments.

With that in mind, the team brainstormed ways to make banking fun. “To make it so that the customer checks the bank application the way we check Facebook,” Poracky said, perhaps “incorporating incentives and gamification into the platform.”

Through that exercise, the students put their M.B.A. studies into practice well before taking diplomas in hand. “It’s a great way to apply what we’ve learned in the classroom to a real-world business problem,” said Poracky. “When we were brainstorming, we were using terms from our class learning, and that helped us shape and focus our thinking.” 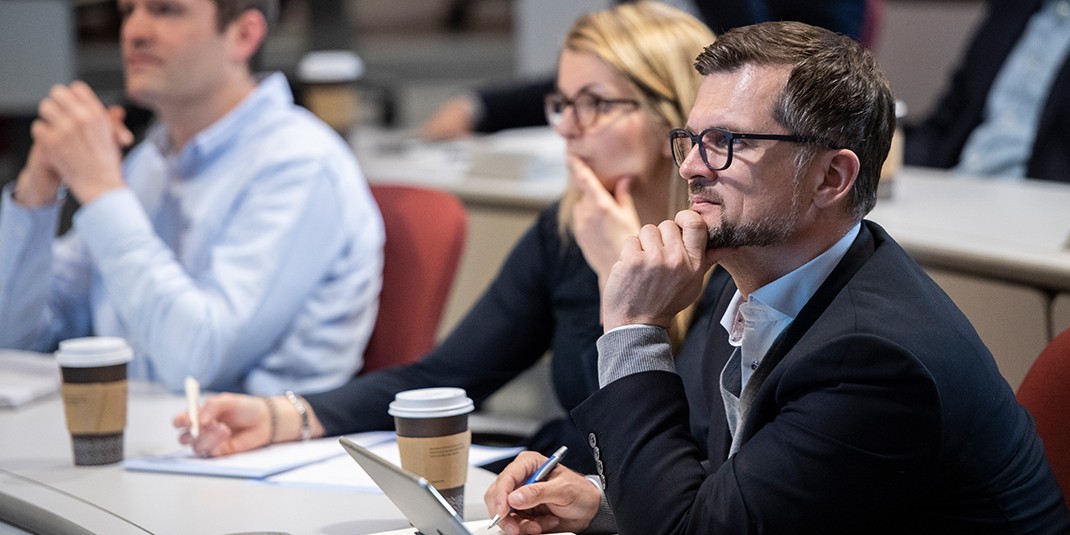 Finally, in April, the three FAU students, as well as three executives from TeamBank and three FAU professors, flew to Boston. The students renewed their friendship in person with tourist stops and dinners out in the Hub. Then they donned business attire (FAU student Julian Bormann got away with a black turtleneck), assembled in a small lecture hall in Fulton, and presented the results of their project to the TeamBank execs.

“Let’s rock and roll,” said Poracky as the students stood up and filed to the front of the room. They began by discussing the challenge and sharing the market research results. The TeamBank people, as well as the Carroll School’s Subramaniam (whose specialty is global strategy), fired questions at the presenters. What is millennials’ favorite nonbank financial app? (It’s Paypal in Germany, Venmo in the U.S.) Is the mindset different or similar between American and German millennials? (It’s similar.) Do millennials realize a Venmo payment is processed through their bank?

“I think everyone knows it’s there, that you’re using the bank infrastructure,” Stevenson responded to that last query. “Then once you’ve downloaded the app, you never think of it again. You think of Venmo as the peer-to-peer transaction, and the bank does the dirty work behind the scenes.”

Then it was time for the students to present two digital mock-ups of their bold product ideas aimed at positioning TeamBank as Germany’s banking innovator. At that point, a visiting writer and photographer were asked to leave the room in order to keep the details of the products confidential.

“Exceeded our expectations,” said Felix Schaffelhofer, TeamBank’s head of strategy, speaking some days later. The bank will indeed use the students’ ideas, he said, and it will “definitely have an impact in our daily work.”

It helped that the students were, naturally, part of the age bracket they were studying. Moreover, Schaffelhofer appreciated the American perspective regarding peer-to-peer payment apps such as Venmo. “These are not that common in Germany,” where cash is still king, “but they could become so in the future,” he said. “The U.S. is always one or two years ahead, so that was some insider learning for us.”

The TeamBank team was impressed by how well the students worked across geopolitical borders and 3,800 miles of land and sea. “They harmonized together,” said Schaffelhofer. “Perhaps with this project we contributed a bit to the understanding between the different nations, which is great to see in these times.”