When There's No Money Left for Textbooks

A growing number of high-need students struggle to meet routine expenses—and now, thanks to the Leo V. Sullivan Fund, they are getting the timely help they need. 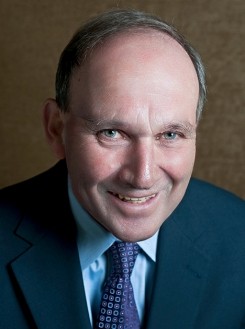 A couple of years ago, a young man walked into the Carroll School undergraduate dean’s office, asking if he could drop a course. The reason? He couldn’t come up with the money to buy or rent pricey textbooks assigned in the class. He was one of a growing number of high-need students who have struggled to meet routine expenses that could keep them from taking part fully in academic life.

In his case, the dean’s office quickly arranged for the textbooks, which the student borrowed for the semester. In other cases, students have gotten help with expenses ranging from suitable attire for job interviews to participation in what are known as “experiential learning” trips to Wall Street and other destinations. Now, the Carroll School is taking the assistance to a new level. It’s launching the Leo V. Sullivan Fund, named in honor of the long-serving Boston College vice present for human resources who stepped down in 2014.

The fund is geared toward Carroll School students who belong to Boston College’s Montserrat Coalition, which aims to assist students at the highest level of financial need. Under the umbrella of University Mission and Ministry, the coalition works to provide these students with mentoring and other guidance as well as tangible support so they can thrive academically, socially, and spiritually.

Montserrat students make up more than 10 percent of Carroll School undergraduates. They typically receive substantial financial aid, but gaps remain, according to Andy Boynton, the John and Linda Powers Family Dean of the Carroll School of Management. The purpose of the Leo V. Sullivan Fund is to more effectively bridge those gaps, which can be consequential. “It’s about making sure everyone who attends the School has the opportunity to succeed—the opportunity to achieve their goals and reach their dreams,” said Boynton.

Amid the pandemic during this fall 2020 semester, the Sullivan Fund has helped over 60 students purchase textbooks as well as access codes for online classroom resources. Professors included references to the fund in their syllabi and the Undergraduate Dean’s office connected students with financial support for textbooks, working together to support students during a time of heightened financial need.

Naming the fund for Sullivan is fitting because of the supportive relationships that the former vice president nurtured at all levels of the University, the dean said.

“Leo knew and helped all sorts of people at the University, especially those with the greatest needs,” Boynton said. “He knew everyone from the guys who drove the trucks to deans and professors. He gave a lot to the University, and he made a permanent imprint on BC’s culture and DNA.” Sullivan, who is the parent of two Boston College alums, and who received his master’s from the Lynch School of Education in 1980, now serves as a special advisor to University President William P. Leahy, S.J.

Currently the Carroll School contributes around $20,000 a year to Montserrat, with roughly half that amount spent on textbooks. Other sundry purchases have included train tickets for a student who needed to get down to New York for a job interview and winter boots for a first-year student from Florida. Yet another student who graduated two years ago had expenses covered for a GMAT (Graduate Management Admission Test) preparation course. The undergraduate dean’s office reports that he is now working for a leading inbound marketing firm—and helping to put his younger brother through college.

With a heightened level of commitment through the Sullivan Fund, Boynton says the Carroll School is determined to meet any needs that would hinder a Montserrat student’s full participation in the School, in and outside the classroom. “It’s part of who we are, part of our mission at the Carroll School and Boston College,” he said. “It’s a mission that inspires us to lift people up.”