Born in a Refugee Hospital, Winston Speaker Tells of His Journey to Concussion 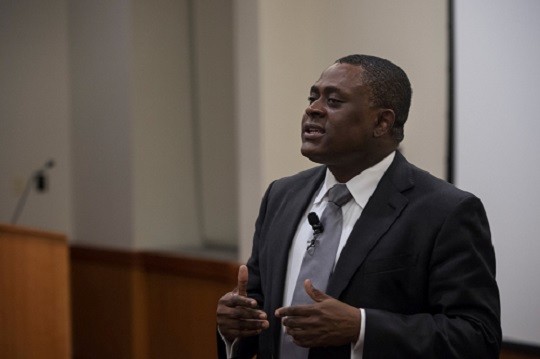 As New Englanders fought the February chill by basking in the afterglow of their Patriots’ Super Bowl victory, a celebrated scientist arrived on campus with a cold, wet blanket—and lessons on perseverance, evidence versus assumptions, and our common humanity.

Bennet Omalu is the forensic pathologist who discovered a brain disease in former football players, chronic traumatic encephalopathy (CTE). For years, he battled a National Football League in denial, a story told in the 2015 film Concussion in which Will Smith portrays Omalu. At the invitation of the Carroll School’s Winston Center for Leadership and Ethics, Omalu spoke to a packed Murray Room in the Yawkey Athletics Center last month. The talk was part of Winston’s Chambers Lecture Series.

His very name—that is, his full family name, Onyemalukwube—means “he who knows, speak,” which has proven fitting. Omalu was born in a refugee hospital in Nigeria in 1968, as that country’s civil war raged. At the moment of his birth, young Bennet’s father was in another hospital, recovering from a bomb blast. (The elder Omalu would carry shrapnel in his body for the rest of his life.) For his first two years, Omalu suffered malnutrition, which stunted his growth.

“You can see how stony my face looks” in a childhood photo, Omalu said, pointing to a slideshow and using his sense of humor to leaven heavy subject matter, as he did often, especially early in his February 23 talk. The crowd of mostly students tittered nervously when Omalu joked about his alcohol abuse in his twenties. As the speaker bore on, Omalu’s high-pitched voice grew louder and more intense.

A frail child, Omalu retreated into books and discovered the power of knowledge. He began medical school at age 15 and was a physician by age 21, on his way to earning, eventually, eight degrees (such as business and public health, to pick just two). He emigrated to the U.S. in 1994.

In 2002, while working in the Allegheny County Coroner’s Office in Pittsburgh, Omalu examined the brain of the late Mike Webster, a troubled former NFL Pittsburgh Steeler. Omalu had never followed American football and knew virtually nothing about it. It took a foreigner, Omalu said, to ask questions like, “Why do they have to wear helmets? If this is a game, a game is meant to be recreational. A helmet means a risk of injury to the brain.”As New Englanders fought the February chill by basking in the afterglow of their Patriots’ Super Bowl victory, a celebrated scientist arrived on campus with a cold, wet blanket—and lessons on perseverance, evidence versus assumptions, and our common humanity.

“People say I ‘speak to the dead’ [when performing autopsies]. No, I speak to the spirit…”

On a hunch, Omalu went beyond a routine autopsy to conduct an extensive microscopic study of Webster’s brain tissue. He found large buildups of tau protein, which would have damaged the regions of the brain regulating mood, emotions, and decision-making. The journal Neurosurgery published his findings.

The NFL dismissed Omalu’s research. “They claimed I was practicing voodoo medicine,” he said. But he and colleagues persisted. On a mission now, Omalu paid out of his own pocket to find and study more and more brains of deceased football players, publishing a second study in 2006. The most significant factor in the disease, he reported, was repeated blunt-force trauma to the head—the kind experienced by many professional football players on every play. The NFL finally acknowledged the link between concussions and CTE in 2009.

A second point Omalu stressed was our common humanity. “People say I ‘speak to the dead’ [when performing autopsies]. No, I speak to the spirit—of all of us. I saw myself in Mike Webster…It’s the same spirit that connects all mankind, a humanity we all share together.”

Finally, Omalu called on listeners to examine their long-held assumptions. The NFL, he said, has sold us the act of following football as practically a patriotic duty. Fans’ unquestioning devotion to their teams long blinded them to the dark underside of the sport, in his view.

On the way out of the Yawkey Center, with Omalu’s words echoing in one’s ears, even a dyed-in-the-wool Eagle could be forgiven for lingering at the lobby displays with a newly troubled gaze. The mementos of BC’s gridiron glory—old trophies, jerseys, photos, a cheerleader’s bullhorn—bespeak an inescapable part of our identity. And these days, BC programs use state-of-the-art guidelines for concussion care. Still, leaving Yawkey it was hard not to wonder if there are tragedies hidden beneath the vintage leather helmets, wherever they may be found.