“Enlarging Sympathies”: David McCullough Returns to the Heights with Timely Lessons from History 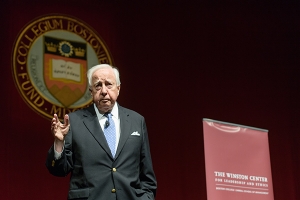 “Does Boston College require students to take history in order to graduate?” David McCullough asked a capacity crowd at Robsham Theater in September.

“Yes!” shouted out several in the audience.

An easy ploy to butter up the Boston College audience? Not so. McCullough’s praise was genuine. It turns out, the University’s History Core makes it an outlier. “Eighty percent of colleges,” McCullough continued, “no longer require history.

America’s elder statesman of narrative history, McCullough was returning to Chestnut Hill as the 2017 Clough Colloquium speaker a decade after he headlined the inaugural Clough Colloquium. Aimed at bringing to campus speakers who are leaders in their fields, the lecture series is part of the Winston Center for Leadership and Ethics, which celebrated its 10th anniversary that evening (see sidebar).

Through his epic books, such as 1776 and The Great Bridge, as well as his voiceover duties on PBS’s The American Experience and other productions, the Pittsburgh native has brought to life long-dead people and events, teaching millions of Americans that the past holds meaning for our present. That night at Robsham, he mounted a spirited defense of humanities education as a booster shot for our current epidemic of incivility. 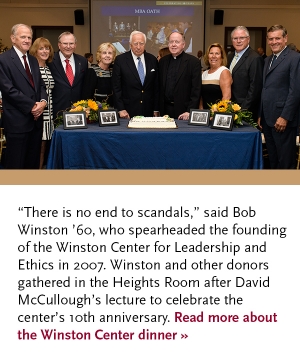 “‘History,’” McCullough quoted Margaret Phelps, “‘cultivates every faculty of the mind, enlarges sympathies’—enlarges sympathies, how important is that?—‘liberalizes thought and feeling, furnishes and improves the highest standard of character.’”

Phelps was a high school teacher in Independence, Missouri, at the turn of the last century. She had no children, and her name might have slipped into obscurity—except that one of her outstanding students went on to become the 33rd president of the United States. “Harry Truman was one of the most remarkable presidents we ever had,” said McCullough, who knows the topic well—he won one of his two Pulitzers for his biography of that president, Truman.

Dismissed by many, then and since, as a hick haberdasher, Truman listened to Chopin and read Latin for fun. And though his formal education ended with high school, he carried Phelps’s lessons with him for life. “‘The only new thing in the world is the history you don’t know,’” McCullough quoted the president. “In other words, if you don’t know history, you don’t know what’s happening all around you.”

Phelps was one of many teachers McCullough pulled out of history’s shadows and into a spotlight. That was the theme of his talk: the positive ripple effect of a good teacher. “The people doing the work that will count the most in the long run,” he said, “are our teachers. It’s not simply that they’re not paid enough—that’s obvious—but they are not given enough credit for what they do.” 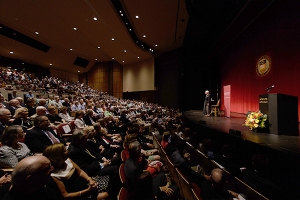 Consider John Winthrop (a descendant of the more famous John Winthrop, first governor of Massachusetts Bay Colony). A Harvard professor and pioneer of astronomy in the eighteenth century, Winthrop taught his students to see the universe through a wider lens, literally. One of those pupils was John Adams, another future U.S. president—and the subject of the book that earned McCullough his other Pulitzer. (He’s also won two National Book Awards and the Presidential Medal of Freedom, among other honors.)

“John Adams was another remarkable president,” said McCullough. “The only one who never owned slaves on principle. And John Adams would always say that one of his greatest memories of all of Harvard was going out onto the roof of the old Harvard Hall and looking through Mr. Winthrop’s telescope at the satellites of Jupiter. . . . It gave him an infinitely larger look at life than if he had not had that inspiration.”

Adams’s wife, Abigail, wonderfully articulated the message of McCullough’s lecture when she gave her son John Quincy Adams a dressing down after hearing that the lad (yet another future president) was strutting about Harvard Yard, a know-it-all.

“‘If you are conscious to yourself that you possess more knowledge upon some subjects than others of your standing,’” McCullough read aloud from Abigail Adams’s letter, “‘reflect that you have had greater opportunities of seeing the world and obtaining a knowledge of mankind than any of your contemporaries, [and] that you have never wanted [for] a book.’”  Under the circumstances, she said, “‘how unpardonable would it have been in you, to have turned out a blockhead.’”

“If you ever get a little bit down about the state of the culture in our country, just remember: there are more public libraries than Starbucks.”

Once the laughter died down at Robsham, McCullough continued, “When I read that, I thought, That could be said of all of us! Given what we’ve been provided in the way of education. Not just those who’ve gone to great universities but those with access to a public library.

“And by the way, if you ever get a little bit down about the state of the culture in our country, just remember: there are more public libraries than Starbucks.”

The thought of that indeed cheered the BC crowd, to judge from the extended applause that greeted McCullough’s fun fact.

The author’s main point was, “There’s no such thing as a self-made man. . . . Little is accomplished alone.” And McCullough didn’t exempt himself from that truism. He began his remarks by expressing regret that his wife, Rosalie, couldn’t be present that evening, and spoke at length about her integral role in his work. She reads every word of every draft to him aloud, and interjects when she thinks a sentence sounds wrong—advice that he ignores at his peril, he said.

Later, during a Q&A, a first-year student asked McCullough what works of history inspired him as a young man. What books would he recommend to the newest generation of scholars?

“First and foremost,” McCullough began, before faltering, the title and author of a noted tome on the tip of his tongue. “Aghh. . . .