BC Center Takes the Lead in a Growing Corporate “Citizenship” Movement

Boston College’s Center for Corporate Citizenship, the largest corporate membership organization of its kind, is setting the standard for "building a more ethical, resilient, and sustainable way of doing business." 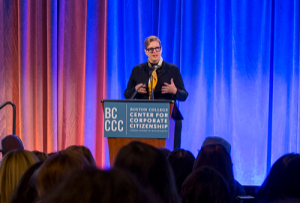 In a jam-packed foyer of Boston’s Westin Copley Place hotel, several hundred people dressed in business casual are standing around with reusable coffee mugs and plates of melon in hand, chatting and networking in between conference sessions. With banners hung on walls bearing names of corporate sponsors, it could be a scene at a major industry convention. But a scattering of tote bags displaying the initials “BC CCC” signals a somewhat different purpose.

The 550 women and men are attending the 2017 International Corporate Citizenship Conference, the world’s largest gathering of business professionals who work on issues of social and ecological responsibility within companies. Behind this annual conference held in late March—and this growing movement—is Boston College’s Center for Corporate Citizenship.

Housed in the Carroll School of Management, the center is the largest corporate membership organization of its kind. It has 430 member companies that span industries from retail and finance to biotech and manufacturing; 40 percent of those firms are from Fortune 1000 companies. Its director, Katherine V. Smith, prefers not to speak of corporate citizenship as a movement. “It’s a business practice, and it’s becoming ingrained,” Smith, who also teaches M.B.A. students, said in an interview.

The center’s 23-member staff has plowed a field known variously as corporate citizenship, corporate sustainability, corporate social responsibility (or CSR), and environmental, social, and governance (or ESG). The names “boil down to the same thing: building a more ethical, resilient, and sustainable way of doing business,” Smith writes with Dave Stangis in their new book 21st Century Corporate Citizenship: A Practical Guide to Delivering Value to Society and Your Business (Emerald Publishing). Stangis is vice president of corporate responsibility and chief sustainability officer at Campbell Soup Company.

For decades companies have involved themselves in communities, contributing to local causes and encouraging volunteerism among employees. “Today there’s a much broader view of corporate citizenship,” Smith said, alluding to initiatives on issues ranging from climate change to labor practices by subcontractors. The trend comes as companies increasingly seek to manage risks to their reputations in response to greater scrutiny by consumers, regulators, and non-governmental organizations.

In its recent 45-page survey The State of Corporate Citizenship 2017, the center found that a growing majority of top executives “expect resources to increase for every listed corporate citizenship dimension over the next three years.” Among those 14 dimensions or areas were consumer data protection and privacy, sustainable use of resources, employee diversity and inclusion, disclosure statements on environmental and social impact, and community economic development. Participating in the study were 796 executives who work within two levels of the president or CEO but are not themselves corporate citizenship professionals. It was the center’s seventh “state of” report since 2003. 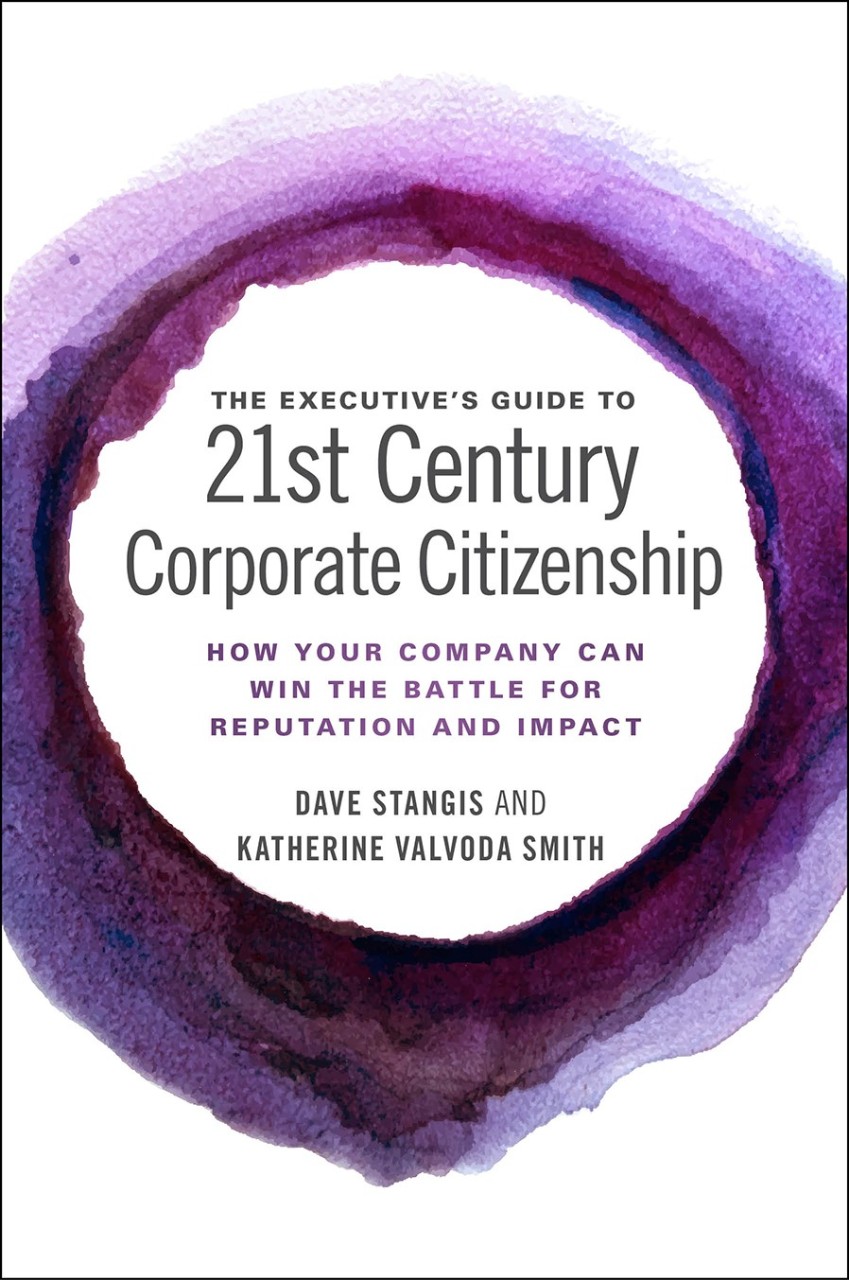 Read an excerpt from the book »

The study also found that a lopsided majority of executives say they were more successful in achieving every listed business goal after integrating social responsibility into their business strategies. That list of 13 included reducing employee turnover, improving risk management, and attracting new customers.

“More and more, companies are thinking about these issues at the top of the organization,” Smith added. Two-thirds of those now directing citizenship efforts are working at executive levels of companies, compared to just a third in 2008—and an increasing number are VPs. “That position actually didn’t exist nine years ago,” she noted, alluding to titles like Stangis’s.

The Center for Corporate Citizenship is bolstering these efforts, especially those of its members, in a broad variety of ways. These include executive education, certificate programs, best-practices research, issue briefs, blogs, and publications such as The Corporate Citizen quarterly magazine. But the 32-year-old center (which has expanded since 2010 when Smith came aboard) is probably best known for its annual conference that offers a telling glimpse into this nearly “ingrained” business practice.

“OUTSIDERS” ON THE INSIDE

“It can be lonely when you’re in CSR because you’re an outsider on the inside,” said Alejandro Hernandez, senior vice president for government and community relations at Wells Fargo. “But when you come to this conference, you understand that you’re not alone in this challenge. That’s where the ecosystem is really powerful.”

Hernandez was one of four presenters at a morning breakout session moderated by State Street Corporation’s vice president and global corporate responsibility officer, Richard Pearl. “We weren’t taught this in school,” said Pearl, referring to ideas and skills needed to build an innovative citizenship program (which he started doing at State Street a little over a decade ago). “This has evolved.” As part of its own evolution, State Street now manages $176 billion in funds with “explicit ESG mandates” such as reducing carbon emissions and investing in affordable housing, according to its 2016 corporate responsibility report. It’s a thriving business.

Conversations in and outside the sessions made at least one thing clear: good corporate citizenship doesn’t just happen. People on the inside push for it, and succeed when they align the social agenda with business imperatives.

At a general session, two officials of ArcelorMittal spoke of a bracing question they began asking some years ago: “What would it mean if we were the most sustainable steel company in the world?” ArcelorMittal was already the world’s biggest steelmaker by a long shot, but the question was not the kind normally floated in that industry (which, for one thing, consumes tremendous amounts of water).

“Selling this to leadership was not easy at that time,” said Marcy Twete, executive director of the ArcelorMittal USA Foundation. Speaking with her on a ballroom stage, the foundation’s president, William C. Steers, agreed. “No, it wasn’t. This was new space for them.”

In 2015, the company formally adopted its “10 sustainable development outcomes,” including #5, “Trusted user of air, land, and water.” ArcelorMittal is now forging what the World Steel Association calls the “most ambitious sustainability narrative” in the industry, having already cut its water consumption by 6 percent. The corporate responsibility officers ultimately convinced people up and down the organization that ArcelorMittal needed to get out in front of issues such as water conservation and responsible energy use, if for no other reason than to lessen the risk to its reputation. 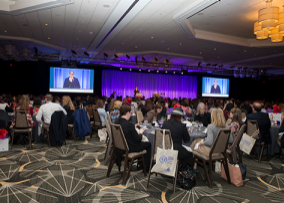 “It was conference room by conference room, team by team, leader by leader,” Twete said of the elaborate organizing process. Steers added: “You have to go looking for your champions.” The search for collaborators also took the citizenship team outside the company. ArcelorMittal became the lead corporate participant in Sustain Our Great Lakes, a private-public partnership that focuses in part on habitat restoration.

These speakers were echoing what is almost universally heard from corporate citizenship professionals.

“It’s a new practice, so there has to be some selling, some convincing, some cajoling,” Smith explained, referring to corporate citizenship in general. “And there are still skeptics.” On that point, she cited a view that began to gain traction in the 1970s, associated with the free-market theorist and economist Milton Friedman. He argued famously that corporate obligations extended only to their shareholders, not to other stakeholders.

That notion has become more and more untenable, partly because of today’s media environment. “The fact of the matter is that in the digital and social world we live in, people will find out anything bad you do,” Smith added. And they will punish you, especially if your products and prices aren’t vastly better than the competition’s.