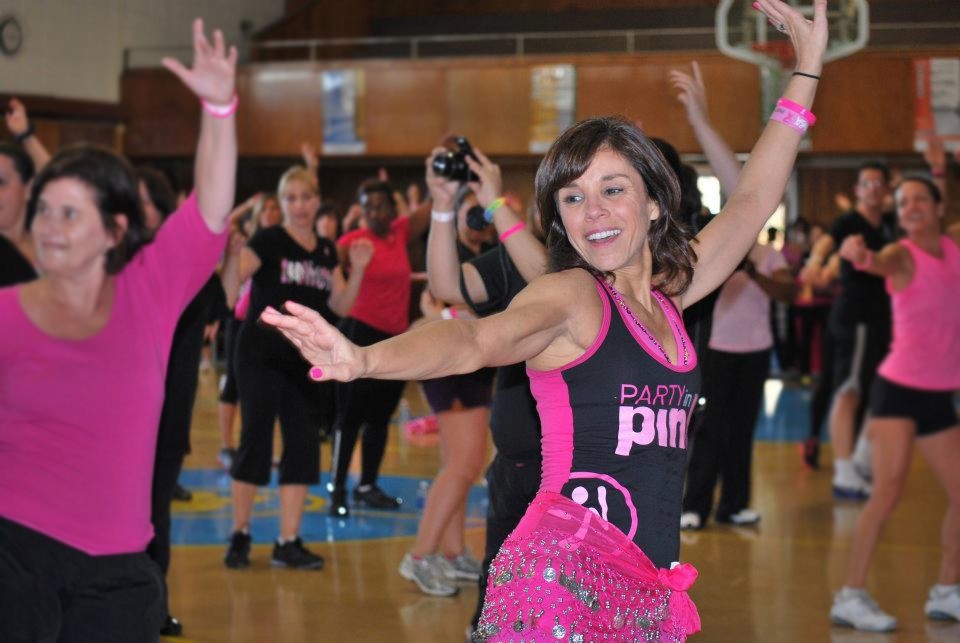 Six years ago, Michele McCallion Ayoub ’86 began looking around for a workout routine she could enjoy while staying in shape. “Our bodies change as we get older,” explains the Carroll School graduate, who lives in New Canaan, Connecticut, with her husband and two children.

At the time, a trainer told her about Zumba, the dance fitness program with aerobic movements inspired by Latin music such as salsa and merengue. “I couldn’t even pronounce it,” Ayoub, a private wealth adviser and senior vice president at Merrill Lynch Wealth Management, says with a chuckle. “But I tried it, and I loved it.”

Her answer was Zumba for a Cause, the initial name of the organization she founded in 2011, in her spare time. It’s now called Fitness for Your Cause.

Every Tuesday night, Ayoub holds a free, one-hour Zumba class on behalf of a charity. People come to class with their checkbooks, with a bag of groceries, with gently used clothing for women living in domestic violence shelters, or some other donation depending on the charitable theme of the evening.

In June, Ayoub dedicated a class (with contributions by cash and check) to The Campus School at Boston College, a special education day school for students with multiple disabilities. The marketing and outreach coordinator for the school is Ayoub’s friend and fellow alum, Kristen Morin ’86.

Usually between around 10 and 20 people turn out for the calorie-burning weekly classes, although special Zumba fundraisers with raffle tickets and entertainment have drawn as many as 185 attendees.

The grocery bags and dollars dropped into a lockbox add up: so far, Fitness for Your Cause has raised close to $89,000 in cash or checks and in-kind donations, nearing her $100,000 goal.

Often the calendar dictates which cause a Zumba class will benefit. For example, at the start of this month the Zumba participants showed up with back-to-school supplies for needy students. Now Ayoub is looking ahead to food baskets for Thanksgiving (even in affluent New Canaan there’s poverty amid plenty and pantry shelves are often bare, she notes), as well as toys for Christmas.

During the week of Valentines Day, Ayoub collects chocolate valentines for battered women in safe houses, and follows up with monetary donations for the women on Mother's Day. By the end of the school year she might be rustling up prom dresses for low-income teenagers before setting her sights on air conditioner units for the elderly.

At other times, Ayoub says she will simply call up her contact at a group such as the New Canaan Food Pantry or the Domestic Violence Crisis Center and say, “I have an opening on my schedule. Do you need anything?”

She credits "my Catholic upbringing and Jesuit education" with her desire to help those less fortunate. And, the classes are no small commitment: as part of her preparation, she composes a different choreography for each number played during the hour. “I have a business career and a family, but I love my Tuesday nights,” says Ayoub, whose son and daughter are 15 and 13, respectively.

“As long as people come, I will teach.”