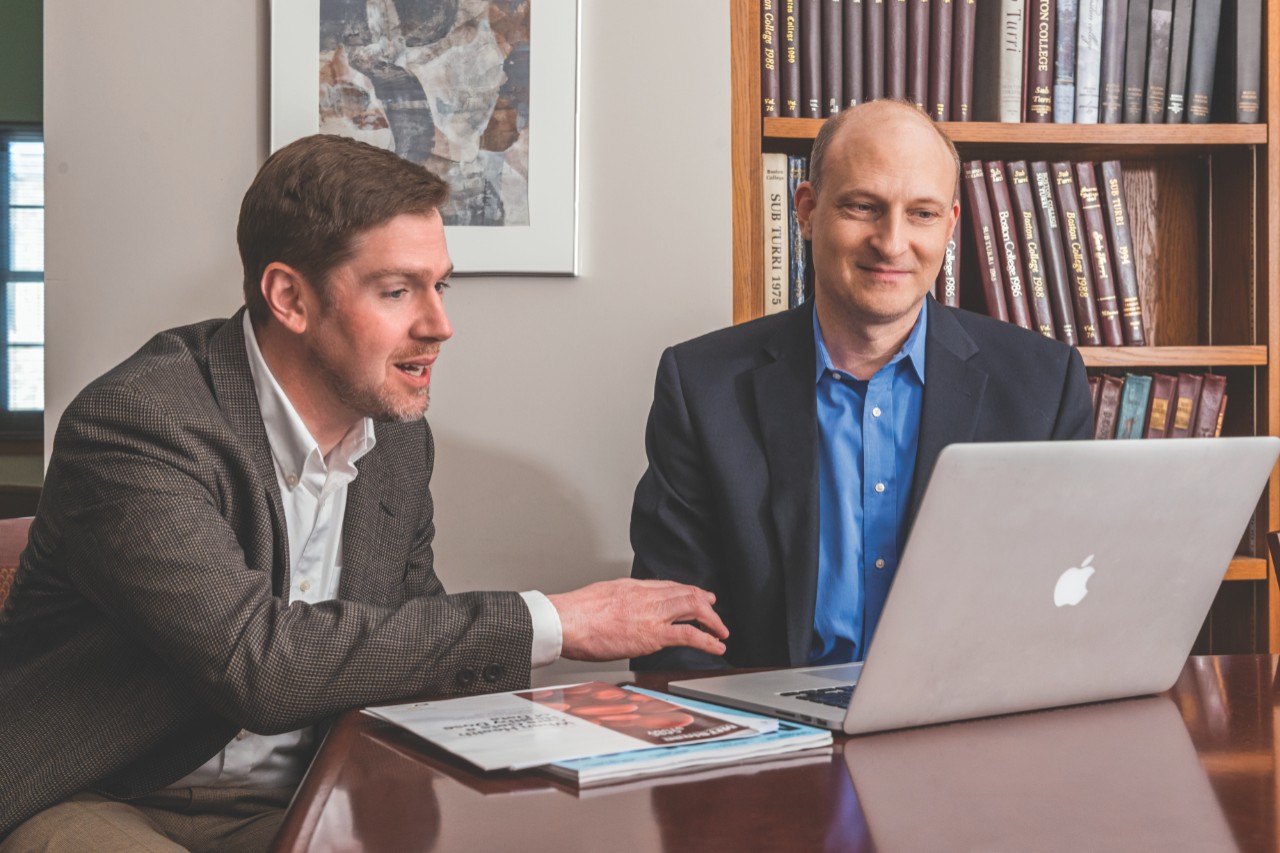 Calling someone an “online evangelist” is usually a metaphor. But in the case of Jerry Kane, a Carroll School associate professor of information systems, the language is less than figurative. Before he became a scholar, Kane was a United Methodist minister, and his interest in social media, his field of expertise, grew partly from his ministry. “Churches are social organizations,” he says. “So for someone with an interest in IT, it was natural to gravitate to social media.”

Today, he shares his social media savvy—dare one say he preaches?—via the website of the MIT Sloan Management Review (SMR), part of MIT’s Sloan School of Management. He’s a guest editor for SMR’s Big Ideas Initiative and regularly writes for the initiative’s blog. His online epistles have won an influential convert—Associate Professor Sam Ransbotham, his colleague in the Carrol School’s Information Systems department. In 2014, about a year after Kane started blogging, Ransbotham also joined as a guest editor and blogger about his field—data analytics.

“The Big Ideas programs are research initiatives that look at large-scale phenomena that are influencing management practice,” says David Kiron, SMR’s executive editor. “We wanted people with intellectual heft as guest editors, and Sam and Jerry brought that.”

“We wanted people with intellectual heft as guest editors, and Sam and Jerry brought that.”

The professors are responsible not only for their own blog posts (which run about once a month) but also for shaping the Big Ideas coverage of their fields. They oversee annual surveys of practitioners and co-author white-paper-like reports published separately through the SMR initiative. They also conduct lengthy interviews with industry leaders that they post to their blogs. Ransbotham, for example, last year did an interview with Hal Varian, chief economist for Google, while Kane (who is the McKiernan Family Faculty Fellow) did one with Lainey Garcia, manager of brand reputation and public relations for McDonald’s USA.

The professors cite similar reasons for opting to add popular publishing to professional lives already full of scholarship and teaching—the immediacy of the impact of their online writing and their ability to interact professionally with people besides scholars and students.

“Academic publications typically take years,” Ransbotham says. “I published a post referencing the VW scandal a week after that hit. I write blog posts, and people read them and respond right away. Other articles I work on have three- and four-year horizons.” 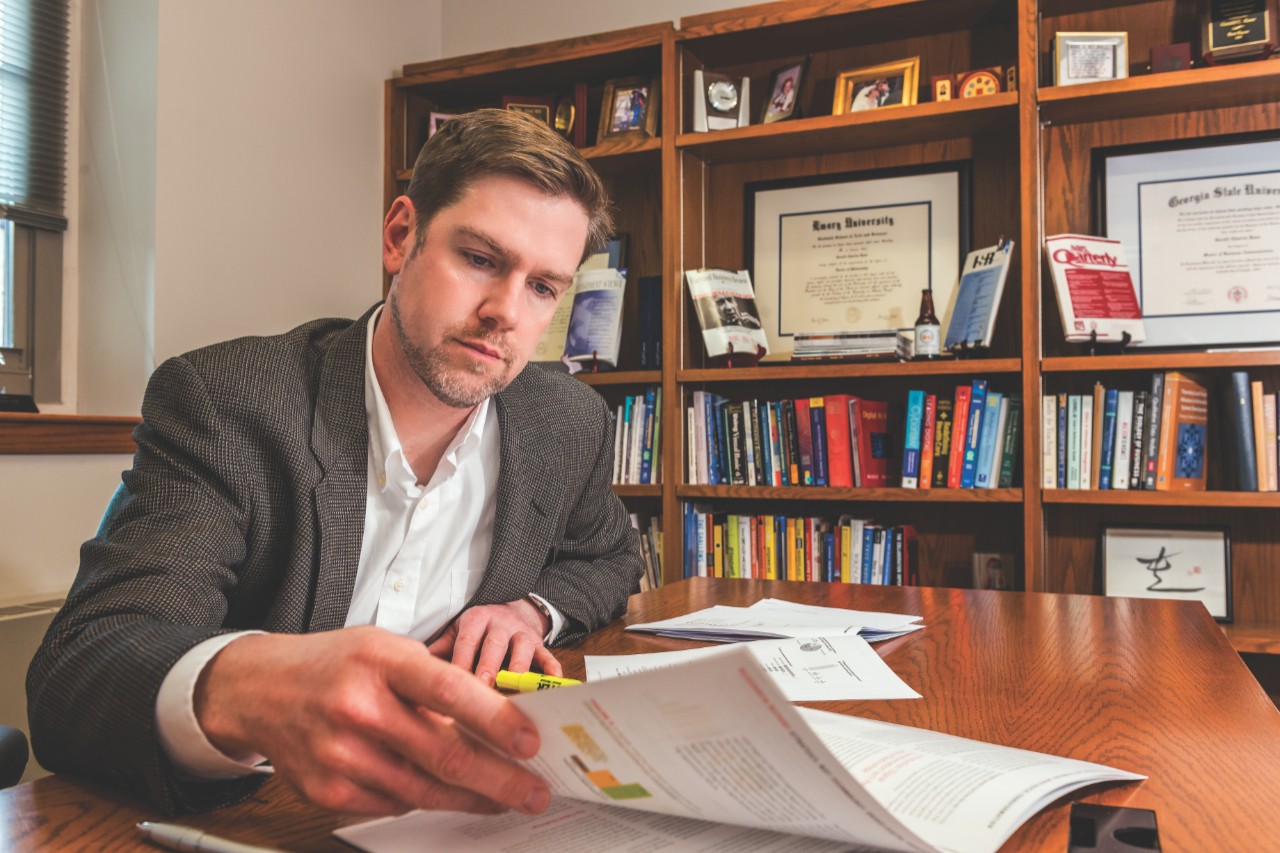 Kane, for his part, says his interviews with IT executives are the thing he sees the most immediate return from—he often ends up using the published versions of the conversations as readings for his classes.

“I feel like my knowledge as a researcher helps me weed through some of the hype and ask the deeper questions,” he says. Among his interviewees have been executives with Air France–KLM, snack maker Mondelēz International, and the Metropolitan Museum of Art.

As bloggers, the professors’ voices are as different as their areas of expertise. Kane typically takes more of an instructional approach, walking readers through the key issues to consider as companies try to expand their use of social media. In a recent post on the “post-email organization,” for example, he explained the benefits of ditching email and moving to social platforms for intra-organizational communication. He illustrated his argument with his own use of Twitter on campus.

“Communicating with my students using Twitter instead of email provides briefer communication, allows me to broadcast responses to the entire group instead of fielding multiple similar emails, and allows others to provide answers to questions if I am not available,” he wrote. “As a result, my email load has trickled to nearly zero in these contexts.”

Ransbotham, in contrast, will riff on the news or pop culture to offer up analysis of recent events or a reflection on research in his field. If Kane’s posts are often how-tos, his can read more like op-eds.

The End of Secrets

Ransbotham used a recent data leak at Ashley Madison, the controversial website where users solicit partners for affairs, as the hook for a post discussing what Peter Swire, a professor at Georgia Institute of Technology, calls the “declining half life of secrets.”

“Secrets in general don’t seem to have much shelf life now,” Ransbotham wrote.

“Secrets in general don't seem to have much shelf life now.” 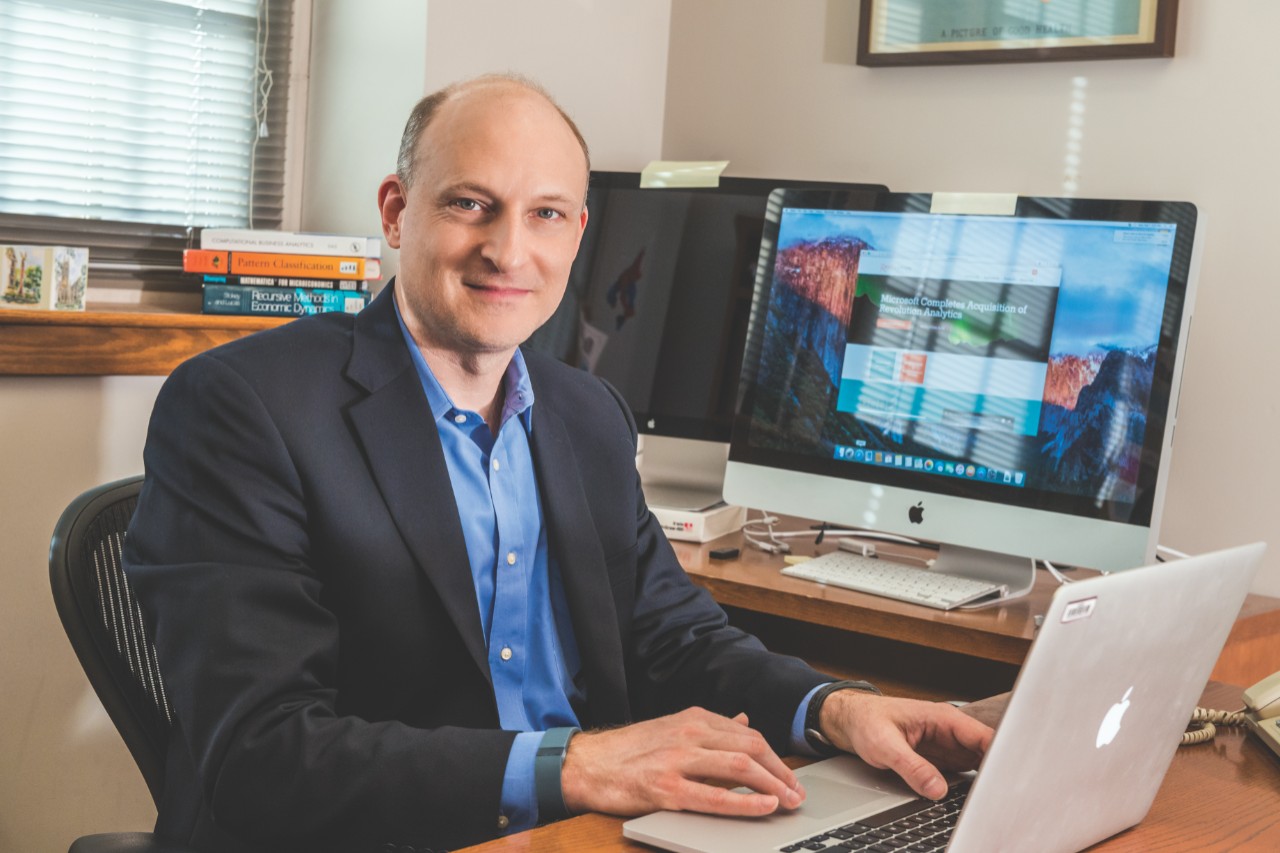 Legions of people and companies are putting sensitive information online, often carelessly, and embarrassing leaks and hacks arrive ever more frequently, he noted. And data analytics, like any tool, from a hypodermic needle to a hunting knife, can be used constructively or destructively. “Unknown information is agnostic and doesn’t know if it is an insight waiting to add business value or a secret waiting to harm,” he said.

In another item posted last summer, he pulled a reference from Dragnet, a classic TV police procedural, to introduce the idea that data can never be objective. Dragnet's Sgt. Joe Friday used to demand that people spare him their emotions and opinions and give him “just the facts.”

Too often, business people think “big data” will give them what Sgt. Friday sought—an objective view of the truth. But even with analytics, facts and truth are as elusive as ever, maybe more so, Ransbotham said.

“While data seems to promise objectivity, instead it requires analysis—which is replete with subjective interpretation,” he wrote. “More data makes it easier to find support for virtually any position—because more data provides more options, limited only by the creativity of the analyst.”

If anything, big data may blind us to our shortcomings as thinkers, he said. Psychologists have documented that people are prone to confirmation bias—they seize evidence that supports their point of view and ignore contradictory information. “This is a particularly acute problem for modern analytics due to the potent combination of access to massive amounts of data, sophisticated methods and the seeming irreproachability of data-based decisions,” Ransbotham noted.

Unlike some other bloggers in rowdier forums, both professors say they look forward to the interaction with readers via comments on their blogs and emails. As befits a publication geared toward professionals, reader comments at SMR tend to be thoughtful and polite, not the usual online blasts of id, dismissing the writer as a fool, a naif, or worse.

One reader, commenting on Ransbotham’s post on data subjectivity, suggested users needed “data sociologists” or “data archaeologists” to help “determine subjectivity values the data embodies rather than assuming it is fact!”

Ransbotham says even far-afield comments can be useful.

“It’s fun to hear back—the positive and negative,” Ransbotham says. “I like the people who push back more, because maybe I did miss something. That kind of debate can also lead to a good discussion point for my classes. If things are clear and obvious, they’re not that interesting to talk about.” Or to blog about.