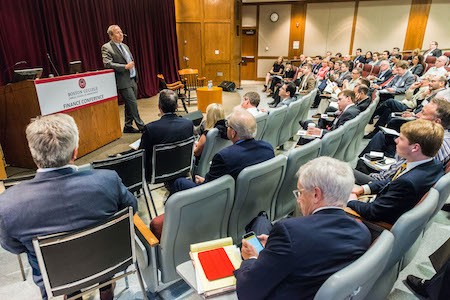 At the Carroll School of Management’s annual Finance Conference earlier this month, headline speakers including former Treasury Secretary Lawrence H. Summers and Federal Reserve Bank of Dallas President Robert Steven Kaplan sized up the economy and financial markets. And the size was a little too small for their comfort.

One figure served up by Summers was two percent. That has been the approximate rate of U.S. economic growth since the summer of 2009. “It’s a sobering picture,” he said, linking slow growth to a mix of challenges including investment in education and even a widening gap in life expectancy between rich and poor.

In a similar vein, Kaplan told the Fulton Hall audience, “The roar of 2016 is that we’ve got to grow.” For that reason, he made it clear that the Federal Reserve is wary of taking steam out of the economy and will raise historically low interest rates “slowly, gradually, and carefully.”

Still, they and other leading experts at the gathering also highlighted advantages enjoyed by the United States such as the relative strength of its economy compared to other well-off nations. “The U.S. is now the leader of global growth, albeit modest growth,” said Nancy Lazar, who leads the economic research team at Cornerstone Micro, an independent research firm.

The Finance Conference is the signature public event offered each year by the Carroll School. This year, nearly 200 practitioners in the financial world—including many Boston College alumni—joined with academics and policy makers who came to the Heights on June 2 for the 11th annual gathering.

In his welcoming remarks, John and Linda Powers Family Dean Andy Boynton ’78, P’13, pointed out that high-level conversations of this kind reflect the approach at the Carroll School.

“We create broad, great leaders for the future,” said Boynton, citing the role of the liberal arts in helping management students to think broadly across disciplines and functions. “We embed our students with a love of lifelong learning—if we don’t do that, we’re not doing our job.” Boynton served as one of four conference co-chairs together with Daniel E. Holland III ’79, P’07, ’08; James E. Walker III ’84, P’18, managing partner at Fir Tree Partners; and Jonathan Reuter, Carroll School associate professor of finance.

During his keynote address that morning, Summers deployed a phrase repeated several times throughout the daylong conference—“secular stagnation,” how economists refer to a prolonged period of little or no growth. 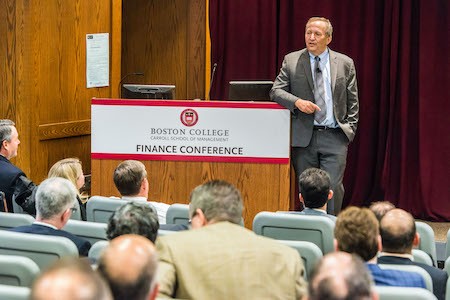 After painting his sober picture, he said nonetheless, “I’d rather be playing our hand than the hand of any other country in the world.” The Harvard University president emeritus drew laughs when he made a point about the inherent dynamism of the U.S. economy. “We remain the only country where you could earn your first $100 million before you buy your first suit,” he said, striking an informal pose as he leaned alongside the podium in Fulton 511 without text or notes.

Summers (who delivered the Daniel E. Holland III Keynote Address) also said there has never been a “better imaginable time” for the federal government to boost growth by repairing the nation’s crumbling infrastructure. Borrowing money at today’s scant interest rates would make far more sense than paying the much higher costs of deferred maintenance in the future, he argued.

He voiced confidence that the nation will eventually rise to this and other challenges, relating Winston Churchill’s wry observation that the United States always winds up doing the right thing—“after exhausting all the alternatives.” 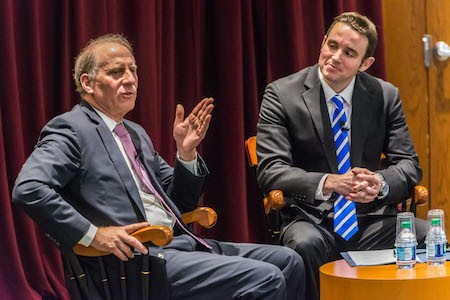 Aside from talks by Summers, Kaplan, and Council of Foreign Relations President Richard Haass, also featured were two panel discussions that included alumni and Boston College parents among the participants.

During one of those discussions—titled “Markets: Unchartered Waters—What’s Next?”—Marc Seidner ’88 said investors in the bond and stock markets should prepare themselves for turbulence. “Recognize that returns are going to be lower,” advised Seidner, who holds the position of Chief Investment Officer Non-traditional Strategies at PIMCO, the global investment management firm. “Expect a period of insecure stability and heightened volatility.”

Probably the most upbeat assessments of the day came from Lazar at that panel discussion, moderated by Ronnie Sadka, chair of the Carroll School Finance Department. Among other encouraging trends, she pointed to an uptick in the savings rate among Americans and what she described as a “U.S. manufacturing renaissance,” while making her point about how domestic growth (“albeit modest”) has outstripped other advanced economies. Rich Bernstein, chief executive officer of Richard Bernstein Advisors LLC, was less sanguine, saying there are “still monster deflationary pressures” both domestically and globally.

At the closing panel discussion (“Investing in Private Firms”), conference co-chair Walker posed a question as moderator: What are some of the key lessons you’ve learned from investing in failed businesses?

“You’re always going to have failed investments,” said T.J. Maloney ’75, P’09, ’16, chairman and chief executive officer of Lincolnshire Management. “One of the very important ingredients in investing is humility. When you see people who are in love with themselves, that’s the time to walk away.” John Morrissey P’14, ’17, executive vice president and director of J.F. Shea Co., Inc., spoke of how easy it is for investors and owners to “double down” on mistakes they’ve made rather than acknowledge and fix the missteps. Joining them on the panel was Peter Saperstone, private equity investment analyst at Fidelity.

Boynton was not the only one at the gathering to address broader themes of higher education and leadership.

A diplomat who held high-level positions during the two Bush administrations, Haass invoked the necessity of lifelong learning for the class of 2016. “There’s zero chance that what you get out of your experience here will fill up your tank to get you down the road for the next 50 years,” he said in what was billed as a “Fireside Chat” on world affairs with Boston College political science professor Peter Krause. (In that conversation, Haas declared that China’s dazzling growth rate of the recent past is “never coming back” and that the current backlash by voters against free trade appears to be “the new normal.”) 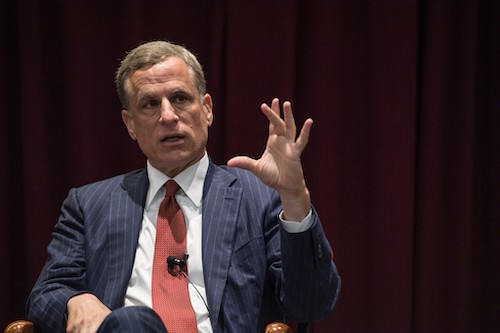 Kaplan, author of several leadership books including What to Ask the Person in the Mirror: Critical Questions for Becoming a More Effective Leader and Reaching Your Potential, predicted that today’s generation of business school students “will get fired and will fire more people” than their predecessors did.

“That’s going to require a lot of emotional resilience. You could get through it, if you love what you do. You have to believe in your mission,” Kaplan said in the Dorothy Margaret Rose Knight Economic Keynote Discussion with conference co-chair Reuter. “The passion will pull you through.”

At the end of the gathering, Boynton noted that ideas are key assets for all knowledge professionals like those in the audience, and he said, “Keep growing intellectually.”