Conference Aims for a Vision of Boston in 2030 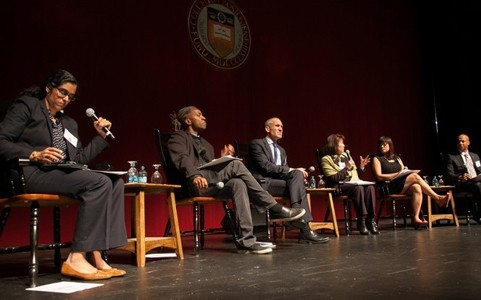 This summer, the City of Boston will unveil a “strategic vision,” setting the stage for its first citywide plan in more than half a century. Helping to shape that vision have been a series of public gatherings—the largest of which took place this spring at Boston College under the auspices of the Carroll School and the Law School.

Jointly sponsored by the Joseph E. Corcoran Center for Real Estate and Urban Action and the Rappaport Center for Law and Public Policy, “Imagine Boston 2030” was sold out weeks before the March 30 event in Robsham. The conference borrowed its title from a multiyear planning initiative to forge what Boston leaders are calling a “stronger, more inclusive city.” The subtitle, “Making Choices for a Growing City,” alluded to the challenges of harnessing growth for the benefit of all Bostonians.

“One thing is for sure—our city is growing,” Mayor Marty Walsh, WCAS ’09, told the crowd made up of Boston College students, teachers, staff, and city residents. He referred to population (expected to exceed 700,000 by 2030, compared to just over 600,000 in 2010) and construction (with $7 billion of projects underway). “It seems we’re building everything in the City of Boston,” he said.

The question is whether “we’ll have growth for everyone,” Walsh added, saying the city must be both livable and affordable. The mayor stressed that his Imagine Boston 2030 initiative is seeking broad participation in the urban planning process. “This conversation isn’t for the few. It’s for the many,” he said, calling on those in Robsham to “go out and ask people to get involved” in the planning process. A final citywide plan, after a few iterations, is expected one year from now.

After Walsh’s remarks early in the gathering, Boston Redevelopment Authority planning director Sara Myerson noted that as recently as the 1980s, Boston was “a struggling city in decline.” Now it’s growing faster than any other major U.S. metropolitan area, she added.

At the same time, Myerson underscored “new challenges.” She pointed out that median income in the city ($56,902) is similar to that elsewhere in the country, but the cost of living here is two and a half times the national average. Soaring rents and home prices are notably to blame. Myerson spoke further of the city’s declining middle class, reflected in “growing wealth and enduring poverty” side by side.

During a panel discussion that followed, Harriet Tregoning of the U.S. Department of Housing and Urban Development pointed to a trend that plays to Boston’s advantage: “It used to be that people followed the jobs. Today, companies follow the talent,” said Tregoning, who directs community planning and development at HUD. She was alluding to General Electric’s recent decision to relocate from Connecticut to the Seaport District in talent-rich Boston.

Moderating the discussion was Meghna Chakrabarti, cohost of WBUR’s Radio Boston, who handled questions from the Robsham audience (penciled out on index cards collected by undergraduate student volunteers) and from those watching the conference on live stream. In response to a question via Twitter, Boston Globe business columnist Shirley Leung highlighted the need for “a pipeline” of jobs flowing into low-income neighborhoods, not just the thriving districts that draw high-paid talent. “There will always be income inequality, but we need to create opportunities for everyone, so there’s a path upward,” she said.

Other panel members included John Barros, the City of Boston’s economic development chief; Walter Hood, urban designer and landscape architecture professor at the University of California, Berkeley; and Joe Kriesberg, who heads the Massachusetts Association of Community Development Corporations. Welcoming and closing remarks at the conference were delivered, respectively, by Law School Dean Vincent Rougeau and Corcoran Center Director Neil McCullagh. In a guest blog post two days earlier for Imagine Boston 2030, McCullagh said the initiative has “created a platform for Bostonians and other users of the city to voice their ambition and vision for a future that will bring out the best in our city and our region.”

Afterward, many members of the audience stepped out through a side exit and into a tent where they voted on different ideas for Boston’s citywide plan. Exhibits featured questions such as “What would you add or change to make your neighborhood an even better place to live?” Conference goers used sticker dots to choose priorities, among them “open space,” “better transit,” and "housing affordable at different income levels."

Asked about the drift of her voting, Corcoran research assistant Kathleen O’Shea said, “I guess the overall theme is mixed income development.” O’Shea, an MCAS ’16 graduate launching her career at Boston-based Initiative for a Competitive Inner City, added, “That’s important for the future of the city.”