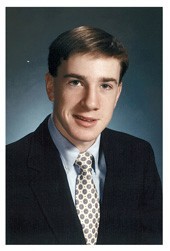 The Kevin M. Eidt Memorial Scholarship is awarded annually to the junior in the Carroll School of Management, who during the past three years has demonstrated a unique combination of academic achievement, character, leadership, and school spirit similar to Kevin's.

The scholarship recipient is selected by a faculty committee of the Carroll School of Management Undergraduate Program and announced at the end of each year.

Kevin M. Eidt was a member of the Boston College class of 2000. A freshman in the Carroll School of Management Honors Program, Kevin died of cardiac arrest during an intramural basketball game in the second semester of his freshman year. In recognition of the tremendous impact he had made on the Boston College community in such a short time, Kevin was posthumously awarded the Nicholas Woods Leadership Award, sponsored by the Office of Student Development. In addition, the Liturgical Arts Group dedicated their "I Want to Praise Your Name" CD to Kevin, and the men and women's intramural basketball championship trophy is named after him. This scholarship was created as a legacy to a young man who, in one semester, made a positive impact on the BC community, lived the motto "ever to excel" and approached every day with the exuberance and determination to live life to its fullest.

The scholarship is funded by the Kevin Eidt Fund at Boston College, which is supported by alumni contributions and grants from the Kevin M. Eidt Memorial Scholarship Fund, a 501 (c)(3) publicly supported charitable organization.