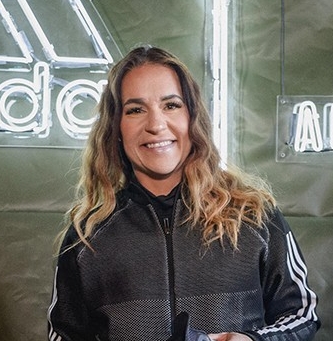 Jen Welter ’00, the first female coach in the National Football League, is partnering with famed footwear brand adidas to launch a series of girls’ flag football camps for underprivileged kids in cities across the U.S. in 2019. Welter, who holds a Ph.D. in psychology, will serve as a coach, mentor, and life-skills teacher at the camps.

“Football is the final frontier for women in sports,” Welter said in a statement. “I always believed through football we could change the world.”

The first camp was offered on a Saturday earlier this month at a predominantly African American high school in Atlanta, and adidas says it's making a multi-year commitment to the nationwide effort. According to Welter, the goal is nothing less than helping to achieve "equal footing in sports" for girls.

Upon leaving the Heights, Welter played as a linebacker for the Massachusetts Mutiny of the National Women’s Football League and then the Dallas Diamonds of the Women’s Football Alliance, while earning a master’s in sport psychology and working toward her doctorate. In 2015, the NFL’s Arizona Cardinals hired her to coach inside linebackers during training camp and the preseason. She is currently the defensive specialist coach for the Atlanta Legends of the Alliance of American Football.

For more information, see the adidas announcement, as well as previous coverage of Welter in The Heights, Boston College’s student newspaper.