Revealing what he hid, Kofi Nimo wins competition to speak at TEDxBostonCollege

Wearing his heart on his sleeve, Kofi Nimo won over a packed Fulton Honors Library last week with a speech about dropping masks and making connections. Out of nine speakers, the crowd voted to give Nimo, Carroll School ’21, the student slot at TEDxBostonCollege, an independently organized TED event planned for April 22.

“Close your eyes,” a sharply dressed Nimo urged the 90 students in attendance. “Picture the version of yourself that you hide from others. Why do you hide from that person? Are you ashamed of it? Is it because you’re not at peace with yourself?”

What Nimo wanted to hide during his first semester at Boston College was his low-income background, he revealed as his listeners’ eyes popped back open. He had been class president at North High School in Worcester, but when Nimo came to Chestnut Hill to study general management, he was ashamed to admit that his impoverished alma mater hadn’t offered economics, for example. He was embarrassed to think of the meager apartment he’d grown up in, imagining his well-to-do classmates’ reactions.

Nimo began to emerge from his shell after joining the popular Boston College dance crew Sexual Chocolate. “That was the best thing that could have happened to me,” he said. The group is about more than just dance, Nimo said. It’s about brotherhood. Making some of his closest friends in the dance squad and hearing their stories, Nimo gradually realized that many of his classmates had their own masks up; they were themselves self-conscious for various reasons.

This dichotomy reminded him of a story from the village in Ghana whence his parents hailed. When complimented on a rug for sale in a market, a weaver demurred that he had made a mistake in the pattern, and even pointed it out. “And yet,” said Nimo, “the rug was so beautiful, and the flaw was part of what made it.”

Nimo encouraged the crowd to acknowledge their own private flaws as a way of bonding with others. “How can we expect to bring other people together if we can’t even bring the inner-folds of ourselves together?” 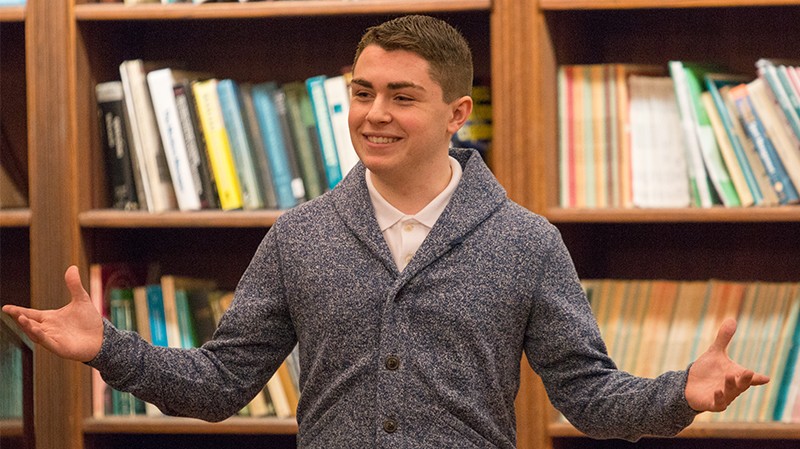 Indeed, bringing people together was the theme for all of the evening’s speakers. TED talks began in Silicon Valley on the topics of technology, entertainment, and design (hence “TED”), but the scope has broadened to encompass any ideas worth sharing. TEDx events are independently organized but follow some guidelines from the TED organization. The TEDxBostonCollege event in April, and last week’s competition geared toward it, is being organized by Jacob Kozhipatt, Carroll School ’20, and Elizabeth Kopec, Morrissey ’18.

In his talk, Jimmy McDermott, Carroll School ’21, recounted the snowy day in 2015 when the entire student body of his high school back in Arlington Heights, Illinois, took to Twitter to badger the district superintendent to give them the day off. (It didn’t work.) While that was “a bad idea,” McDermott conceded, the episode demonstrated the potential for technology to bring people together. A kinder, more productive example of what McDermott called “connective technology” came last year, when a young man’s goofy tweet in search of free chicken nuggets eventually prompted a $100,000 donation to charity.

“It’s not about technology, it’s about us and what we choose to do with it,” said McDermott, an information systems student who is the CEO of one company, 162 (which provides branding and digital marketing), and the CTO of another, Transeo (which helps schools track service hours). “I believe in technology, but I also believe in humans and our ability to use technology to connect rather than divide.” 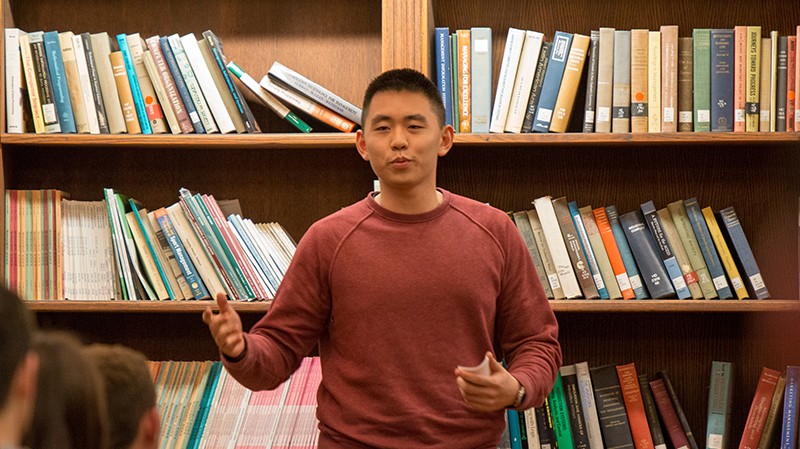 A third speaker enrolled at the Carroll School, Brian Gong ’19, argued that bringing people together is the highest value that an entrepreneur can offer society. Gong peppered his talk with plenty of self-deprecating humor—“I’m in the bottom 20 percent of my class that makes the other 80 percent possible”—as well as heavy praise for the Shea Center, which has helped him launch a startup, Lin-Q, a professional networking platform.

“In two months, I’ve made such amazing progress, that I’ve lost fourteen hundred dollars,” he quipped. For comparison, Gong told of his ten-year-old sister’s entrepreneurial skills. She sells cups of homemade slime to customers at her grade school in the Gongs’ hometown of East Williston, New York. “She’s been doing it for a week, and she’s already made more money than I’ve lost,” Gong joked.

Growing serious, Gong spoke of a friend and Carroll School alum, Brittany Loring, JD/MBA’13. Loring almost died in the Boston Marathon bombing in April 2013. “Lying in a hospital bed, bandages on her head and hand, shrapnel wounds everywhere,” Gong said of her condition in the bombing’s aftermath. “Random people from around the world donated to help with her hospital bills, which were crazy high. She turned around and gave it all to charity.”

Now, Loring heads the Brittany Fund for Trauma and Recovery. “She’s doing amazing things,” said Gong, who is running this year’s Boston Marathon to raise money for the fund. “She’s bringing together a community that was so fragmented. And she’s not keeping a single penny for herself. But she’s still an entrepreneur. Sometimes the best entrepreneurs don’t make money.”