Wrestling the Bear in His Own Cave

Bill Plunkert used to think the masks and gadgets in spy shows like Mission: Impossible were impossibly hokey. Then the Boston College grad found himself in Moscow, putting on an uncanny “old man mask” made in Hollywood, as he prepared to hop out of a moving vehicle.

“I wouldn’t need that mask today,” Plunkert quipped to an audience in Gasson 100 in October. “But I did then.”

“Then” was 1982, when Plunkert was a CIA agent stationed in the Soviet Union’s capital. “Every fiber in my body was going Ping! Ping!” he recalled of the moment he leapt out of that car. Meanwhile, a dummy version of himself popped out of a fake birthday cake placed on the seat he’d just vacated, intended to fool a KGB tail. Plunkert and colleagues had only seconds before the pursuing KGB agents would turn a street corner and either buy the Americans’ ruse—or not. Hanging in the balance was Plunkert’s planned meeting with the highly placed Russian informer who might arguably do more than anyone to bring down the Iron Curtain. “I was hyperventilating like a crazy man,” Plunkert said.

Plunkert related the outcome of that evening (stay tuned)—and talked about his later transformation from a spy to a spiritual director—while an audience of 120 members of the BC community listened with rapt attention. The Carroll School of Management’s Winston Center for Leadership and Ethics sponsored the lecture, “My Life as a Spy During the Cold War and Beyond,” and Carroll School Dean Andy Boynton introduced Plunkert, who earned his bachelor’s degree in history and philosophy from the Morrissey College of Arts and Sciences in 1968.

“I don’t read management books in my spare time,” Boynton confessed to the crowd. “I read spy books.” It was while reading one of those books a few years ago—David Hoffman’s The Billion Dollar Spy: A True Story of Cold War Espionage and Betrayal (Doubleday, 2015)—that Boynton found out about Plunkert and decided to invite him to the Heights. “He’s a true hero,” said the dean. 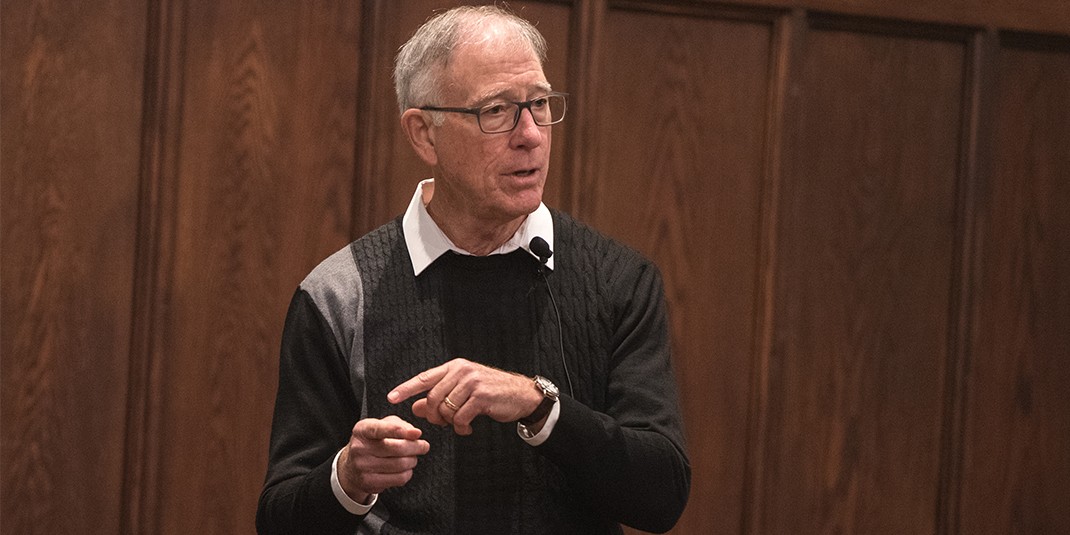 At age 18 in 1964, Plunkert had barely ventured outside his hometown of St. Louis when he rode the train to Boston clutching his acceptance letter to Boston College. “I brought it with me—just in case,” he joked, sparking knowing chuckles from the crowd. As the tall, trim, and bespectacled Plunkert described his younger self—a Midwesterner struggling to communicate with a grizzled Boston cabbie—it was easy to picture a character out of a Norman Rockwell painting, toting the single suitcase that would hold “all my worldly possessions for the entire year,” Plunkert said.

By second semester, he said, “BC was my home.”

“It was a remarkable change,” he went on. “I liked my courses; the professors cared, they were willing to answer questions. I had teammates [in baseball and soccer], friends. BC felt like home, and that allowed me to take chances, because I felt secure. They wanted you to try things here. Sometimes you’d fail with a thud, but the sun rises, you get up, you try again.”

A “trapeze moment” is how Plunkert describes that act of taking a chance or a leap of faith. “No one wants to let go of the trapeze and commit to the next one—but it’s exhilarating, and then you don’t have to wonder, ‘What if?’”

That’s a message that today’s anxious students need to hear, Winston Center Director Monetta Edwards said later. “Some of them are such high performers, have specific goals, and any sign of failure or deviation from said goals makes them crumple, rendering them almost helpless” in extreme cases. “Something that I encourage many of our speakers to do is to talk about the setbacks in their journeys, so the students can see that even professionals at the highest levels suffer from failures—and that in spite of that are okay.”

After college, Plunkert served in the U.S. Navy for five years, then joined the Central Intelligence Agency.

The BC crowd ranged from alumni who remember Cold War air raid drills to students born in this millennium. Many in the former category nodded as Plunkert recalled that in the 1970s, “the USSR was truly an existential threat—they could devastate the U.S., even if we wiped them out too. . . .And at that time, it appeared that Communism was winning.”

Not wishing to destroy the world with nukes, the U.S. could only hope to contain the Soviets with conventional warfare (should they attack our Western European allies), and in that regard, Moscow held the upper hand, with superior numbers and several strategic advantages.

That’s why Adolf Tolkachev was so critical—the “billion-dollar spy” of Hoffman’s book title. “Tolkachev is the hero” in this now-declassified story, Plunkert stressed.

“BC felt like home, and that allowed me to take chances, because I felt secure. They wanted you to try things here. Sometimes you’d fail with a thud, but the sun rises, you get up, you try again.”

Tolkachev rose through the ranks to become the leading engineer of Soviet anti-aircraft weapons systems. Yet he despised Communism, and he bore a grudge against the regime for its murder of his father-in-law under Stalin. To strike back, beginning in 1978, “he gave to the CIA some of the most damaging information on the Soviet Union Army—more than anyone, maybe ever,” said Plunkert.

And it was Plunkert’s duty as Tolkachev’s new handler in 1982 to keep that stream of information flowing.

That night in Moscow, the KGB tail car turned the corner and passed right by Plunkert without stopping. From behind, it appeared to the Russians that the same four Americans who had been sitting in the car moments ago were still riding along and chatting—Plunkert’s boss operated the dummy, turning its head left and right—while an anonymous elderly local ambled past on the sidewalk. The ruse had worked.

But Plunkert still had to shuffle along the streets for many blocks in his old-man mask and a nondescript Soviet overcoat.

“There was pretty much only one style of overcoat in the Soviet Union,” Plunkert said, “so it was easy to blend in.” The former spy’s glib aside, one of many, drew laughter and broke some of the tension in Gasson, even as many audience members literally sat on the edges of their seats.

It was hard to breathe in the mask, and the agent’s glasses fogged up—which made it difficult to walk past a couple of KGB monitors on the sidewalk without bumping into them. Plunkert managed by holding his breath.

For the next two hours, Plunkert zig-zagged about the city on public buses and changed into another, lighter disguise. The trip entailed several steps, any one of which could have gone awry and scotched the mission. Moscow was honeycombed with KGB surveillance, making his job there tantamount to “wrestling the bear in his own cave,” as Plunkert told Hoffman.

At last, Plunkert made it to the rendezvous point. However, he noticed an apparently drunk Muscovite leaning against a nearby lamppost. Or was he a drunk? Plunkert had to wonder.

“I wasn’t much of a praying man then,” recalled Plunkert, “but I thought, ‘Okay, God, here’s the deal. I’ll just assume that guy’s a spy, unless you give me a sign otherwise.’”

At that moment, the drunk projectile-vomited. As Plunkert stared at him, the man vomited again.

“Well, if he is a spy,” Plunkert recalled thinking, “I just have to tip my cap to him.” The Gasson crowd roared with laughter.

With the coast clear, Plunkert met with Tolkachev for the first time. The two were supposed to open with a coded conversation. “The script was something like, ‘How’s your sister?’ ‘She is sick.’ ‘Did you take her to the hospital?’ ‘Yes, I rode the train,’” Plunkert recalled.

Instead, as Plunkert began, Tolkachev—by now an old hand at the spy game—cut him off with, “Yeah, yeah—sister, sick, train. Let’s walk.”

Tolkachev gave Plunkert a trove of confidential documents, and the agency’s relationship with its prized inside man continued for several years. The high-level intel that Tolkachev fed to Plunkert and the CIA saved the U.S. billions of dollars in defense spending (hence his nickname and the book’s title) and allowed the U.S. to outmaneuver the USSR in Europe. Plunkert credits Tolkachev to a great degree with Glasnost (reforms and openness under Soviet leader Mikhail Gorbachev) and, eventually, the fall of the Berlin Wall.

But the Russian paid the ultimate price. Before the thaw in the Cold War, Tolkachev was found out, captured, and executed. “And what the KGB often did,” said Plunkert, still clearly pained by the loss, “was to then extract the bullet and send it to the widow with a bill for the price of the lead.”

Plunkert retired from the CIA in 2001. Married with two children (and now three grandchildren), he hoped to become a history teacher at a Catholic high school in Arlington, Virginia, but there was an opening for a religion teacher. He took that job instead, and taught the religion class to seniors for seven years.

During the Q&A portion of the evening, one young man asked, “Were there any skills you learned in espionage that aided you as a high school teacher?”

“It helped me to listen,” Plunkert said. “Not just to what someone’s saying, but to the tone of voice, their fidgeting. That helped with teenagers, because there may be a subtext or some concern under the words that they’re actually saying.”

During Boynton’s introduction, the dean had mentioned that Plunkert retired from teaching high school in 2008 and entered training to become a spiritual director in Ignatian spirituality (offering guidance at retreats and in other settings), which he completed in 2011.

Now during the Q&A, an older gentleman asked, “I’m very interested in hearing about how you transitioned from teaching high school religion to becoming a spiritual director.”

“It wasn’t a bolt from the blue,” Plunkert said of his calling. But the seeds were planted when he took the high school job—or perhaps even earlier. To re-educate himself on the finer points of his faith, “I went back to my old religion and philosophy books from BC, which I still had.” As he studied them and began to go on retreats, it stirred something inside him, he said. “It was like putting back on a comfortable old pair of slippers.”

Besides his “trapeze moments,” Plunkert used another metaphor to describe his latter career stages, and it’s an apt one, calling to mind the harrowing tale of how he eluded the KGB one night on the streets of Moscow.

“In a life journey,” Plunkert said, “you never know what’s around the next corner.”