“We Could Fix Things Pretty Well”: Alicia Munnell and the Search for Retirement Solutions 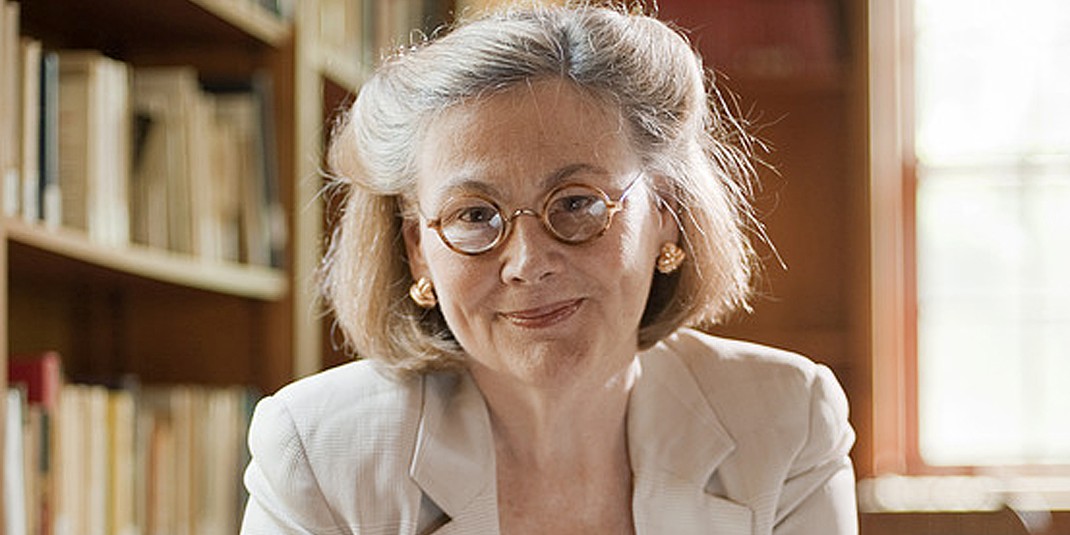 On a late Wednesday afternoon at Boston College’s Center for Retirement Research, Alicia Munnell is bracing herself for a possible deluge of telephone calls from the news media. In Washington, the House of Representatives is debating two pieces of legislation that would make it harder for states and municipalities to offer IRA programs to private-sector employees whose companies do not have such plans. Reporters from outlets including the Wall Street Journal and New York Times have alerted Munnell that they will seek comment from her immediately if the House takes a vote.

This is hardly unusual for Munnell, who is the Center’s director, the Peter F. Drucker Professor of Management Sciences at the Carroll School—and one of the most sought-after experts on retirement security.

Her organization, located in Hovey House just off campus, plays a leading role in nationwide discussions of retirement policy. With its 22-member staff, the Center sends out an almost daily raft of research and analysis on questions such as how to ramp up retirement savings. It does so not only in high-level studies but also in digestible forms including briefs, blogs, and podcasts. One of its special projects is the National Retirement Risk Index, which measures the percentage of working-age people whose standard of living is likely to fall in retirement (more than half of the households are typically found at risk).

Munnell came to Boston College 20 years ago. During the early-to-mid 1990s, she served in two top policy roles in Washington—as a member of the President’s Council of Economic Advisers and as Assistant Secretary of the U.S. Treasury for Economic Policy. Before that, she spent two decades at the Federal Reserve Bank of Boston, rising to senior vice president and research director. She has authored numerous books including Falling Short: The Coming Retirement Crisis and What to Do About It (Oxford, 2014), written with Charles D. Ellis and Andrew Eschtruth, the Center’s associate director for external relations.

On that late afternoon in February, Munnell spoke with the Carroll Connection on a range of subjects including how to get ready for the retirement crisis. She also related the story of the Center’s fortuitous founding (“I had never applied for a grant. I worked for the Federal Reserve—we just printed money”). And, she eventually got around to the question of how a self-described party girl who “didn’t do all that well” in college eventually ascended to the heights of U.S. economic policy making.

Then, the House voted to overturn federal rules that had made it easier for states and municipalities to offer payroll-deduction IRAs to private-sector workers, and the phones in Hovey House started ringing.

An editorial in the New York Times yesterday started off this way: “There is no overstating how unprepared Americans are to retire.” You agree?

I think this is a really serious situation, yes. But one theme of our book Falling Short is that we could fix things pretty well within the current financial infrastructure that we have.

You need to get people to save more and work longer. We’re big proponents of working longer. If you claim your Social Security benefit at 70 instead of 62, your monthly benefit is 76 percent higher, which means you’ve got this base of income adjusted for inflation that goes on for as long as you live. We need to make 401(k) plans totally automatic. We need to cover the 50 percent of private-sector workers [who don’t have a pension or IRA]. And we need people to recognize that their house is a major asset they could use in retirement, either by downsizing or taking out a reverse mortgage or some way of tapping their equity. But nothing I’ve said means we’ve got to scrap the current system and start all over. This is all just fixing the components of the existing system.

And what about Social Security, which some say can’t survive because of the retiring Baby Boomers?

In terms of Social Security, there’s no news. We always knew the Baby Boomers were going to retire. They were born between ’46 and ’64, so they can’t be a surprise to anybody. We’ve always known that at some point the Social Security Trust Fund was going to be exhausted as the Baby Boomers retired. I think that’ll happen in 2032, and that’s of concern. Sometimes policymakers characterize that as the program going bankrupt, which is not correct because even when the Trust Fund is gone, payroll taxes already on the books will be enough to pay 75 percent of the benefits. So when people, especially young people, tell you the program’s “not going to be there for me,” that’s wrong. It’s important to clarify that the exhaustion of the Trust Fund does not mean the program disappears. It means you need to either cut benefits to fit into revenues, or increase revenues to cover promised benefits, which is what I prefer. But it’s not like Social Security will be gone.

“Most people do have control over how long they’re going to work. They should plan on working five more years, let’s say.”

You’re known for conveying hard truths about retirement funding. Are the truths getting harder?

I think they’re becoming more generally accepted. I don’t think the situation has become worse. It’s just that we haven’t taken the steps necessary to make it better. But I think with our help, the message has really gotten out—there are big flaws in the retirement income system. People are going to retire with inadequate money. That’s a tragedy because people don’t have a lot of options at that stage. I think our message of working longer has also gotten out, or at least the public debate has moved to this notion of working as long as you can.

“As long as you can”—that’s an important caveat.

You’re absolutely right. There’s about 30 percent of the population for whom it’s very difficult to work longer. That’s why, when people say, “Oh, let’s raise the age at which you get full monthly benefits,” it sounds harmless. What that means is that people who have to retire early [for example, due to health] are going to see their benefits cut more and more.

What can people do?

Most people do have control over how long they’re going to work. They should plan on working five more years, let’s say. And that means convincing your employer that you’re engaged, you want to be considered for promotion, you want to be involved in training. You can’t sit at work and look at property in Florida and achieve that. You have to persuade the employer that you’re there for another 10 years, and that should start in your 50s. And obviously, if your employer provides a 401(k), you should join it. You should contribute enough to get the full employer match, and you shouldn’t take your money out.

When you have this pile of money, you can’t help but think, Do I want my kids saddled with these [student] loans or do I want to make sure I’m secure in retirement? We generally say make yourself secure, first. It’s like on the airplane, putting on the oxygen mask: put your own on first and then help your child. Make sure you’re not going to be a drain on your children’s resources once you retire.

Was there a moment when you decided “this is what I’m going to do with my career, with my life”?

Students sometimes ask me, “Did you always want to be an economist?” The answer is no. I was a normal person, I wanted to know where the party was, what the latest dance or music was. I didn’t do all that well at Wellesley College. I was basically in the bottom third of the population in terms of abilities. I had reconciled myself to that. People live happily being in the bottom third. But then I got out and I started working, and I enjoyed working. Ended up at Brookings [the Washington think tank] in the 1960s, and said I want to do this. I had two children and went to Harvard in the late ’60s, early ’70s, and got a Ph.D. Then I went to work at the Federal Reserve Bank of Boston for 20 years and became research director halfway through. The thing about the Fed is if you wrote on monetary policy you were scrutinized to death. If you wrote on tax policy or the budget or infrastructure or pensions, nobody paid much attention to you. So I just went off on my own. I had written my thesis at Harvard on the impact of Social Security on personal savings, and I continued writing some books on related topics.

Then around 1993, after Bill Clinton was elected president, somebody called from Washington and said: Would you like to be Assistant Secretary of the Treasury for Economic Policy? I said, without thinking about it very much, sure, that sounds great. Because I thought, If I stay at the Fed I’m just going to be doing the same thing. So I went off to Washington for five years.

So an RFP came across my desk to set up a center on retirement in 1997. And I thought, I know these topics, I can do this. I had never applied for a grant. I worked for the Federal Reserve—we just printed money. I worked for the Treasury—you want money, you just tax people. Applying for grants was just not something I did. I had a young senior who helped me here, and we put in this grant for $5 million, a huge amount at that time. We got it, and that’s our center.

It’s an academic center. Why do you spend so much time on briefs, blogs, media interviews, etc.?

We feel it’s not just important to figure out the answers for ourselves and write journal articles. We believe that translating research results into coherent, digestible pieces is really our mission. That’s why we’re on the phone, why we spend a lot of time issuing briefs and so forth. We care a lot about that. It’s not just studying the stuff in the abstract; it’s trying to tell people what’s important, where things are OK and where they’re not.

People don’t want to think about whether they’ll have enough money in retirement. They feel like they’ve failed, they just go in a fetal position. So we need to let people know there are millions like them. And we need our legislators to take some action so that more people can be secure when they stop working.