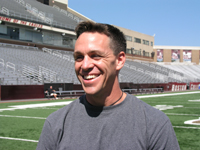 Upon graduation from BC in 1990, Dr. Healey worked as an applications chemist at Orion Research for three years before pursuing a masters degree in Music Education from the New England Conservatory and serving as a brass instructor with the Boston Crusaders Drum & Bugle Corps. While at NEC, Dr. Healey studied with Dr. Richard Colwell and Frank Battisti. Following his graduation from NEC in 1995, Dr. Healey designed and coordinated the Boston College Marching Band performance at the Macy’s Thanksgiving Day Parade and later served as Director of Bands and Assistant Professor of Music at Saint Xavier University in Chicago, IL. He also served as a music education consultant for the Midori Foundation and the New York City Ballet.

Dr. Healey received his doctor of philosophy degree from Boston College in 2016, and he remains active as an adjudicator, clinician, and guest conductor. He is an avid cyclist and runner and has bicycled across the United States from Seattle to Boston, run to the top of Mount Washington, and completed the Boston, Chicago, and New York Marathons. Dr. Healey and his wife, Joy (BC ’92), reside in Hull, MA with their five children: Daria, Max, Alyssa, Troy & Victor.