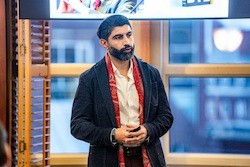 He holds a PhD in Sociology from the University of North Carolina at Chapel Hill, and earned a MA and BA in political science from University of Tehran in Iran. From 2016 to 2018, Kadivar was a postdoctoral fellow at Watson Institute for International and Public Affairs at Brown University.

Kadivar’s research has been published in the American Sociological Review, Social Forces, Comparative Politics, Socius, Mobilization, and Sociology of Development. His work has won awards from the Collective Behavior and Social Movement (CBSM), Comparative Historical Sociology, Global and Transnational Sociology, Sociology of Development, and Peace, War and Social Conflict sections of the American Sociological Association (ASA). Kadivar's first book is forthcoming in 2022 with Princeton University Press. He has also published analyses of Iranian politics for public audiences in English and Farsi in outlets such as Foreign Affairs, Washington Post’s Monkey Cage blog, and BBC Persian.