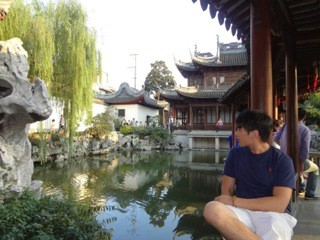 Now in his fourth year at Boston College, Stephen Choi is a graduating senior. In May 2014 he will leave BC with a double major in Islamic Civilizations & Societies and Political Science.

Though many ICS undergraduates concentrate their studies on the Middle East, Choi has taken a different path. He focuses on China, a country he finds fascinating.

“Most people do not really think of China as having a strong Islamic influence but there are many ethnic minorities in the western province Xinjiang and other major cities that make it worthy of observation,” he says.

Given his double major, it’s no surprise that what interests Choi most about China is the politics of the region. One question that especially concerns him is how an authoritarian, secular regime deals with religion. His senior thesis focuses on the interaction of the Uyghur Muslims in Xinjiang with both the state apparatus and the Han Chinese majority.

Although he had initially planned to pursue a History major, he decided in his sophomore year that the ICS degree was better suited to his interests, and Professor Kathleen Bailey helped him through the application process.

Choi says that his ICS coursework has changed a lot of his preconceptions about the Islamic world, and has given him an appreciation for “the complexities of the cultures and societies that most people don't really think about.”

His studies have benefited from taking three years of Chinese, including a study-abroad year in Beijing, which was supported by a Boren Scholarship (awarded to American students who want to study abroad in areas of the world that are critical to U.S. interests and underrepresented in study abroad).

“Foreign languages really help you immerse yourself in the areas you take an interest in,” he says. In China, he took trips to Xinjiang province, where he “was able to experience for myself an entirely different world from the Forbidden City and the Great Wall.”

He explains that “everything from the architecture to the food had a refreshing departure from China proper. And yet underneath the beauty of the culture was a deep underlying tension. The situation in Xinjiang is not particularly good.”

Choi describes the region as “a conundrum” for the Chinese leadership. “Frankly they have no idea how to deal with the dissent of the indigenous people.”

He explains: “From the Uyghur perspective, the development of infrastructure and extraction of hydrocarbons in Xinjiang does not benefit them, and are really only meant for the Han. The CCP however feels that the region belongs to China. They believe the best way to go about resolving the issue is to integrate the Uyghur population into greater China, and eventually have them assimilate into the mainstream culture. This is a great point of contention, as the Uyghur people have a distinct culture, history, and language. They are Indo-Europeans, not Han Chinese, and they feel that they are being oppressed by the same measures used to ‘integrate’ them. It is a rather messy issue.”

Choi thinks he’d like to teach in the future. He could be headed for graduate school. But in the meantime, he says he plans on returning to China to work more on his language skills. “So my next year may be in back in the PRC.”