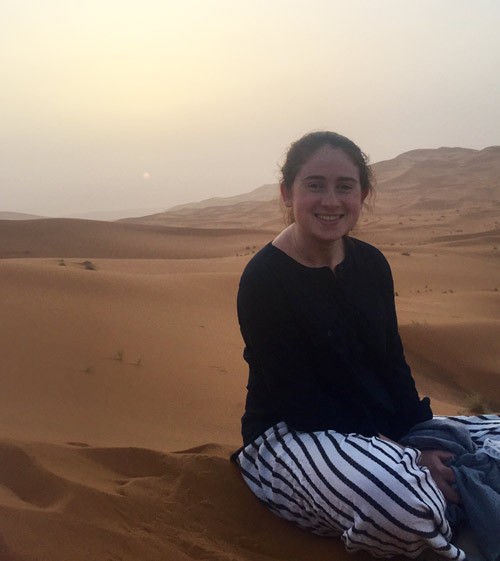 The weeks leading up to my departure to Rabat, Morocco were filled with questions for which I had few answers. Where would I be living? What would I be doing on a daily basis? How would life be in Morocco? I was travelling to Rabat to study Arabic and volunteer with children from low-income families with the CIEE Summer Arabic Language Program, but beyond that general outline, the content of my trip remained unknown to me. During my time in Morocco I planned to delve into research questions about the gap between opportunities for males and females in the country, to learn about the education system, and most of all, to immerse myself in a new culture. I hoped to learn about the country through personal relationships, travels to various Moroccan cities, and volunteering. The uncertainty that I felt in Boston did not disappear in Rabat, but I came to embrace the Moroccan aversion to plans and the preference to live in the moment, valuing the people around me rather than focusing on plans for the future. In these spontaneous encounters and off-hand conversations with community members came the most impactful learning experiences.

Immediately after dropping my bags at the apartment in Agdal, a neighborhood in Rabat, I was taken on a tour of the area. The CIEE staff member introduced us to people everywhere we went—saying soon enough, they would begin to treat us as locals. This certainly proved true. These individuals I saw on a daily basis became my most valuable Arabic teachers and access points to Moroccan culture. The men at the local hanout, or convenience store, spoke to my classmates and me solely in Darija, the Moroccan dialect, patiently helping us learn. Bartering in the medina proved to be a true test of what I learned in the classroom, and quickly paid off when the merchants understood that I was in fact a student, not a tourist. Stepping out of a taxi after having a conversation with the driver entirely in Arabic brought an unmatched sense of accomplishment. I have always acknowledged, on an academic level, the value of learning a language as an avenue to culture, but the people of Agdal brought new meaning to this contention. Making an effort to speak both Modern Standard Arabic and Darija to Moroccans immediately brought a smile to their faces. It opened the door to conversation that not only increased my comfort level with a foreign language, but also allowed me to understand this country from a completely different perspective.

My experience with language in Morocco also contributed to my research about the education system. In Rabat, I quickly found that most people could, in one conversation, alternate seamlessly between Arabic, French, Darija, and often English without a moment’s hesitation. The adults I met through CIEE amazed me with their language competency, as I learned that many of them began English classes in elementary school and most of their courses were conducted in French. In this way, the educated in Morocco were often multilingual. Most of the students I worked with at Dar Chabab, a youth center where I taught English classes, spoke French and Darija, and these were the children in Rabat with relatively fewer resources. The lack of funding given to this organization, which has sites dispersed around the country organized by the government, hinted at a reality of poverty that I did not fully encounter in Rabat.

Every weekend during my eight weeks in Morocco I travelled to a different part of the country. Each location was strikingly unique, and a few in particular exposed the division between the poor and wealthy, as well as the urban and rural. While in Marrakech, we hiked in the Ourika Valley area and came across Amazigh villages. Here the people only spoke Tamazigh, the language of the local people that is not used in most schools, and they lived significantly more simple lives. I noted garbage in the streets of Rabat, but this was more noticeable with the piles of trash in the mountains. Additionally, the children who climbed with us did not wear shoes and we struggled to communicate. Seeing this reality was difficult given the Morocco I had come to know in Agdal. A similar experience occurred in Oualidia. While in this small beach town my group had the opportunity to speak to the family of a local fisherman. The mother and daughter spoke to us from the other side of the wall as they were embarrassed by the large group, and the college-age girl spoke about continuing her education. This was not forbidden in her community, but it was expected that either her father or younger brother would walk her to school each day. Furthermore, the mother and daughter spoke of how the improvements to infrastructure in their community that facilitate her walk to school came only when the king began to frequent his property in the town. These realizations came in contrast to my experience in Rabat. Many of the women who I met in Agdal were students at the nearby Mohammad V University and the rural life differed greatly from the urban setting of cities such as Tangier and Marrakech.

Travelling throughout Morocco highlighted for me the ways in which the country remains divided. Discussions with locals regarding the king are challenging, but most will acknowledge what the current regime has done in terms of advancing women’s rights and enhancing education. Yet, those same people will express the need for more access to education and greater progress. I was especially struck to learn that there are only two major hospitals in the country, a reality I learned about through locals recounting harrowing experiences with the health care system. There were times when people referred to Morocco as a ‘third world’ country, a contention that initially felt so misplaced given the neighborhoods that I had come to know.

Speaking of the socio-economic status of Morocco would be incomplete without noting the pride that Moroccans take in their country. Repeatedly, locals would emphasize the value of the country beyond camel riding and tourist attractions. There are developments within the country, academia, and something I became particularly aware of during the World Cup, national pride. As I prepared to leave Morocco in late July, the shopkeepers in the local medina repeated a message that I found particularly significant: remember your time here fondly, tell people about what you learned, continue to study Arabic, and always know there is a place for you in your second-home. During my eight weeks in Morocco I studied Arabic, volunteered at Dar Chabab, travelled up and down the coast, and delved into research questions. These experiences brought countless opportunities for learning and meaningful memories, but I would most readily define Morocco in terms of its people and culture of profound hospitality. 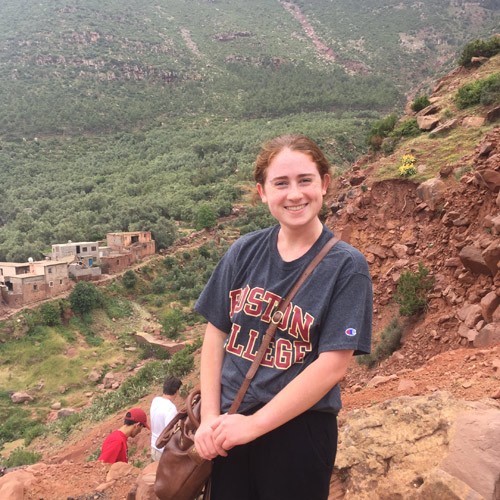 Prior to leaving for Rabat, Morocco, I considered the two major academic pursuits I outlined largely as separate endeavors: studying Arabic and researching the education system. Language, however, quickly became my entry point to the country as a whole. Of course my attempts to speak both Modern Standard Arabic and Darija, the Moroccan dialect, with locals opened the door to friendship and allowed me to encounter the culture more profoundly, but it also significantly affected my research.

The range of languages spoken in Morocco became apparent at the airport in Casablanca. Locals, who would greet me in English, could switch between the Arabic I had heard in class, French, and a dialect that incorporated the two, as well as Tamazigh. As I walked to class each morning, I saw women, books in hand, en route to the nearby Mohammad V University. Though Rabat was not immune to poverty, here I saw a developed city with infrastructure, access to education, and a role for women in the workplace. When travelling to various parts of the country on the weekends and engaging in more in-depth conversations with locals, I soon realized my limited perspective in the capital city.

One afternoon a few weeks into my time in Morocco, CIEE organized an activity for my Arabic Language Program to meet with local volunteers—it was a space for us to inquire about life in Morocco. The subjects ranged from LGBTQ rights to how young adults spent their time, but one related to gender equality. A Moroccan man and woman facilitated the conversation for my group, and when the question of whether or not men and women were equal in society was raised, the man responded with a certain “Yes.” Immediately, the woman looked at him incredulously and they engaged in a debate not unlike those heard in the US; they brought up the wage gap, the workplace, and education. It was a significant moment that set the tone for the remainder of my time as I learned about the education system. What I found was that though most Moroccans would agree that the current king has promoted women’s rights, in rural areas there remains notable gender inequality and cultural barriers to education.

In Oualidia, a small beach town, my group had the opportunity to speak to the family of a local fisherman. The college-age daughter spoke about continuing her education, which was not forbidden in her community, but it was expected that a male would walk her to school each day. Even with this apparent obstacle, the woman expressed great determination to earn her degree.

Speaking of the socio-economic status of Morocco would be incomplete without noting the pride that Moroccans take in their country. Repeatedly, locals emphasized the value of the country beyond camel riding and tourist attractions. There are developments within the country, academia, and national pride—something I became particularly aware of during the World Cup. The country is home to people of various ways of life, but all express pride in their country and hope for the future.