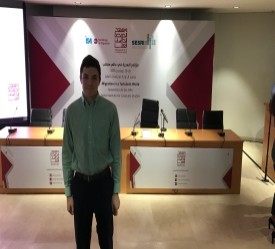 Hagop worked alongside fellow student Catherine Cole on a project entitled "Broadening Al Noor's Network at the RC31 Sociology of Migration Conference in Doha, Qaar." Here is what they had to say about their project.

The opportunity to travel to Doha, Qatar to attend the RC31 conference on Sociology of Migration and to make connections at Qatar University was a significant step forward for Al Noor, Boston College’s undergraduate Middle Eastern Studies journal.

For years, Al Noor has struggled to attract submissions from outside the Boston College student body, forcing us to select our articles from a small, often homogenous pool. At Qatar University, we met with professors in Communications and Business, as well as with students in a variety of other departments, which will allow us to expand our reach not just beyond the bubble of Boston College but beyond the United States, too. Al Noor is unique among Boston College publications in that it enjoys a large global audience of readers, thanks to the many Boston College faculty members who have introduced the journal to their contacts in the Middle East, Europe, and South America. In Doha, we continued that tradition and built relationships that will boost the journal’s global leadership for years to come.

At the RC31 conference, we networked directly with academics, activists, and researchers from the Middle East, encouraging a wider range of submissions that will increase the diversity – and ultimately, the quality – of our publication. The fact that this conference focused on migration and refugee studies, the most pressing issue in the Middle East today, underscored the importance of Al Noor’s presence. From meeting and learning from the foremost scholars on migration, we are better prepared to produce a publication that accurately and professionally represents the scope of Middle Eastern studies in today’s world.

We grew academically from our participation in the conference, learning about both sides of the “migration coin.” On one hand, leading cities such as London, New York and Singapore compete for talent in an increasingly globalized labor pool. On the other, already-struggling nations such as Kenya and Lebanon must strain to accommodate millions of desperate refugees fleeing violent conflict. Scholars at the RC31 conference advocated for a variety of policies to help maximize the benefits and minimize the harms of both forms of migration, and we returned home with their proposals very much in mind.

Our experience in Qatar was also valuable for us on a personal level. We met dozens of Qataris—from native-born university students to newly arrived Indian migrants working in the service sector. We were able to ask Qataris about the role of Islam in their lives, the treatment of migrants, and the position of women. We were fortunate to observe backstage preparations for Qatar’s national day, seeing firsthand how the Gulf monarchy is working to forge a distinctive national identity. And we met and befriended several Qataris our own age, learning about their pride in their country, their hopes for the future, and their opinions of the United States.

We are grateful for the support of the Omar Aggad Fellowship. Because of its funding, we were able to make our attendance at the RC31 conference and our journal’s relationship with Qatar University a reality. We want to thank everybody behind the Aggad fellowship for their support and their generosity, which has played a substantial role in our own academic development and will greatly improve the quality of Al Noor.