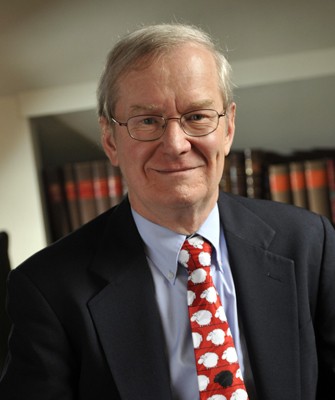 James Steven Rogers, Emeritus Professor of Law, taught and writes in the areas of contracts, modern commercial law, particularly payment systems, the law of restitution, and the history of Anglo-American commercial law.

Professor Rogers has played a major role in the development of modern commercial law. He served as Reporter (principal drafter) for the Drafting Committee to Revise UCC Article 8, which established a new legal framework for the modern system of electronic, book-entry securities holdings through central depositories and other intermediaries. One observer characterized that project as “the most challenging and ambitious uniform or model law project since the creation of the UCC” and remarked on the “outstanding work of the tireless and imaginative reporter, Professor James Steven Rogers.” Prof. Rogers has spoken on that project at numerous symposia and conferences both in the United States and abroad. He was also involved in the projects on negotiable instruments (UCC Articles 3 and 4) and secured transactions (UCC Article 9).

He is widely published in law reviews on subjects of modern commercial law and bankruptcy, particularly in the fields of investment securities, negotiable instruments, and the history of Anglo-American commercial law. His 1995 book The Early History of the Law of Bills and Notes was published by Cambridge University Press. One reviewer of that book called it “brilliant, daring, even iconoclastic in its scope,” noting that “Rogers' book can only be called path-breaking.” Another remarked that while “few technical subjects remain so nearly inaccessible to those engaged in interdisciplinary studies as the evolution of exchange mechanisms,” Rogers “writes with great technical proficiency and precision” so that “this is a book that most general historians will find accessible.” Yet another reviewer observed that “this is a thoroughly absorbing and consistently illuminating book.”

Professor Rogers' The End of Negotiable Instruments: Bringing Payment Systems Law Out of the Past, published by Oxford University Press, covers the modern law of payment systems and the role of history in the development of that law. Unlike most discussions of reform of payment systems law—which assume that the existing law works well for traditional paper-based systems—Rogers’ book argues that the law of checks and notes, as set out in Articles 3 and 4 of the Uniform Commercial Code, is itself anachronistic and all but incoherent. The book shows much of the current law of checks and notes is the product of nothing more than that historical fluke, such as odd details of the eighteenth century Stamps Acts. It shows that there is no need for a statute governing promissory notes and that the law of checks would be far simpler if it treated checks simply as instructions to the financial system, akin to debit or credit cards.

Rogers’ work is well-known abroad as well as in the United States. He has participated in symposia on comparative aspects of the history of commercial law in Italy and Spain. He has spoken on the commercial law foundation of the securities clearance and settlement system at programs in England, Australia, China, Japan, Mexico, and the Netherlands. He served as one of the United States delegates to the Hague Conference on Private International Law project to negotiate and draft a Convention on Choice of Law for Securities Holding Through Securities Intermediaries and as a member of Drafting Group for that Convention.