The Black Faculty, Staff, and Administrators Association (BFSAA) promotes the interests, well-being and advancement of employees of African descent at all levels of the Boston College community. 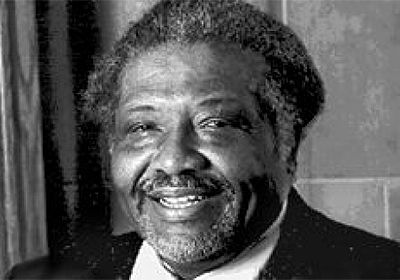 Charles Frank Smith Jr., Boston College’s first-ever tenured black professor, died on Aug. 1, 2019, according to an announcement by the BC Thea Bowman AHANA and Intercultural Center (BAIC). Smith, who was 86, taught in the Lynch School of Education from 1968 to 1996.

Smith left his mark both on and off campus. He first arrived on the Heights as an instructor of social studies methods and the director of the Teacher Corps Program, a national organization focused on increasing early education opportunities for low-income communities. Smith went on to found and direct the University’s Urban Education Program, which continued the mission of the Teacher Corps Program. Upon retirement, Smith was named professor emeritus.

He also organized the Association of Black Faculty, Staff and Administrators in 1972. As its president, Smith was an outspoken advocate for social justice and a principled critic of racial inequality on campus. 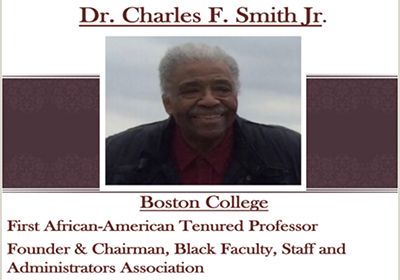 “He was the first African-American professor on campus to receive tenure, and as a consequence he has served as a mentor to all black faculty and administrators who have arrived since then,” then-Affirmative Action Director Barbara Marshall said at his retirement. “He has been very helpful in enabling others to survive on campus, eagerly sharing his wisdom.”

A native of Cleveland, Dr. Smith joined Boston College’s School of Education in 1968 as an instructor of social studies methods and director of the Teacher Corps Program, which was part of a national effort to train graduate students to teach in urban areas. He developed and directed the Urban Education Program, Boston College’s initiative to prepare student-teachers for inner-city work. He also organized and chaired the Association of Black Faculty, Staff, and Administrators, as well as the Council of Black Faculty. An associate professor, Dr. Smith frequently spoke and wrote about issues of social justice and racial inequality.