Inaugurated in 2000, the Heinz Bluhm Lecture Memorial Series in Literature and Culture brings to campus distinguished academics and prominent intellectuals from outside the academy, addressing a wide range of topics relating to the literatures and cultures of Europe and the United States (including their influence on or interaction with non-Western societies).

The lecture series commemorates the legacy of the late Prof. Heinz Bluhm, who in 1968 founded the Boston College German Studies Department and served (until 1976) as its first chairman. Prof. Bluhm, who died in 1993, was known for his monumental project, the Index Verborum, an electronically accessible reference guide to the essential words in Martin Luther's writings from 1516 through 1525, that was the crowning achievement of his Luther History Project. He also bequeathed to Boston College his 4,000-volume scholarly library, housed in Lyons Hall 201E.

All lectures are free and open to the public. 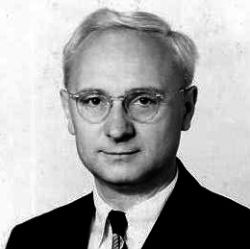 Prof. Heinz Bluhm in 1956 at the time he was awarded a Guggenheim Fellowship (photo: John Simon Guggenheim Memorial Foundation website).