The concept of “social innovation” – harnessing new strategies, ideas or organizations to address urgent social needs – is a relatively recent one that has gathered force in the 21st century. But Tiziana Dearing, co-director of the Center for Social Innovation at Boston College, says there is an enduring yet widely overlooked driver of social innovation: Catholic thought. 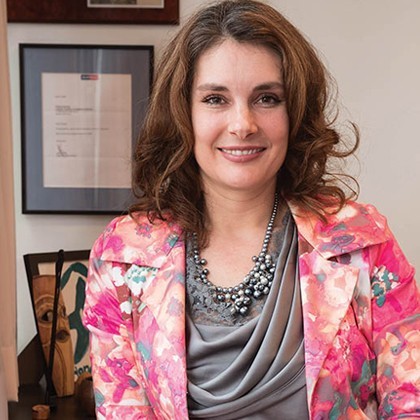 “I would argue that, at some level, all social innovation is inherently – although not always intentionally – Catholic,” says Dearing, a professor of macro practice at the BC School of Social Work and former director of Catholic Charities Boston. “Our 20th-century definition of ‘social justice’ was shaped by and arguably rooted in  Catholic values, and so much of the language in social innovation resembles that found in Catholic doctrine about care for the marginalized and vulnerable.”

Dearing’s view on social innovation’s links with Catholicism was crystalized after participating in a groundbreaking study of how Catholic-affiliated organizations have responded to the global refugee and migrant crisis.

The study was commissioned by FADICA, Foundations and Donors Interested in Catholic Activities, as part of a project on defining Catholic social innovation. The CSI collaborated with FADICA to examine the scope and scale of Catholic outreach in 32 countries with a greater-than-average flow of migrants and refugees.

Dearing, along with three graduate students – two from BC School of Social Work, the other in the joint BCSSW-School of Theology and Ministry program – studied more than 140 Catholic ministries aiding refugees and migrants and profiled 64: Half of the interventions are identified as Catholic-led or Catholic-based, the remainder affiliated with Catholic nuns.

Among the examples of Catholic social innovation cited in the report – titled “Catholic Social Innovation in the Global Refugee Crisis” – were a transitional home for refugees outside Pittsburgh, converted by the Sisters of Charity of Nazareth from a house they owned, and a program in a Chicago neighborhood where refugee women gather to work on textile projects.

I think this study makes it clear that an existing institution can be innovative, and at the same time offer a wealth of experience and insight. That’s always been our belief at the Center for Social Innovation.”

These and other Catholic initiatives, the report found, are marked by a commitment to a range of values represented in Catholic social teaching, including human dignity, a commitment to the common good, care for the earth and promoting the dignity of work. In addition, according to Dearing, socially innovative Catholic approaches are often involved in “radical repurposing of existing resources to put them at work for vulnerable populations.”

Such characteristics are a hallmark of most social innovation ventures, whether secular or faith-based, says Dearing.

“One reason why social innovation’s connection to Catholic social thought is generally unexplored is there is a disproportionate emphasis on ‘what’s new’ – start-ups and the like,” she says. “Catholic institutions are often disregarded or downplayed simply because they are older. I think this study makes it clear that an existing institution can be innovative, and at the same time offer a wealth of experience and insight.  That’s always been our belief at the Center for Social Innovation.”

Dearing hopes to use the lessons of “Catholic Social Innovation in the Global Refugee Crisis” as a starting point for conversations in the larger social innovation sector.

“Shared values tend to be helpful. My feeling is, this is a great opportunity: Let’s look at how the values and goals we share can inform a discussion, and a movement, to social justice. What is there in the Catholic language that can translate to a secular environment?”

Dearing notes that Pope Francis has included secular as well as Catholic institutions in his call to assist the “excluded and marginalized.”

“Pope Francis has talked about the importance of ‘everyday’ holiness – that you don’t have to be a member of the clergy or a religious order to strive for holiness, but that you do good for the benefit of others,” she says. “He’s an innovative pope.  It’s a wonderful idea.”