Reimagined, virtual presentation of a favorite Boston College tradition is honored for execution and engagement

Boston College Pops Off the Heights—a reimagined, virtual presentation of the University's signature scholarship celebration, Pops On the Heights—garnered accolades from attendees last fall, and now has won a prestigious Gold Circle of Excellence Award from the Council for the Advancement and Support of Education. 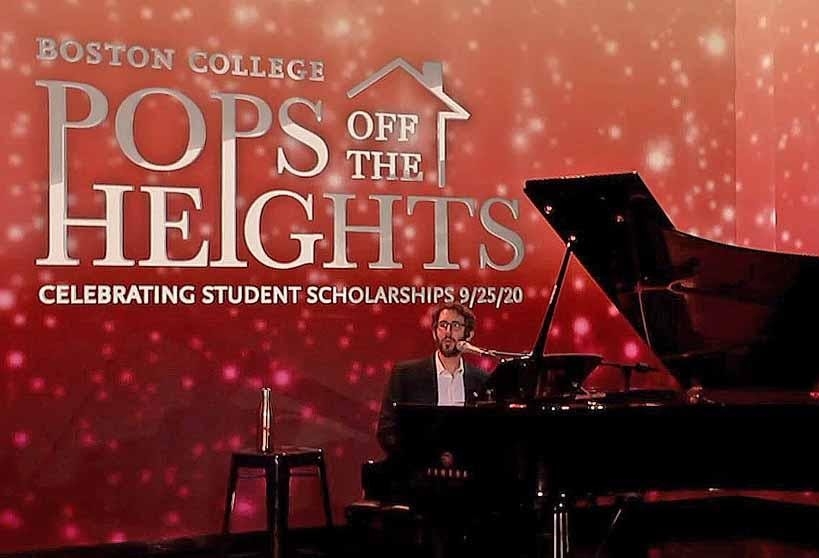 "While nothing can replace being together in Conte Forum, we wanted to deliver an uplifting and fun experience to Eagles everywhere with this special Pops Off the Heights,” said BC Senior Vice President for University Advancement Jim Husson.

Due to the pandemic, the event—held on September 25, 2020—brought the BC community a creative twist on a favorite annual tradition. It featured special guest and Grammy, Emmy, and Tony Award nominee Josh Groban, as well as Boston Pops Conductor Keith Lockhart and members of the Boston Pops Orchestra. Event segments were pre-recorded—on campus and elsewhere—and livestreamed; a format which provided access to a wider audience than is possible with the in-person venue.

The highlight of Parents Weekend, Pops was launched nearly 30 years ago. Tickets and tables to the fundraising gala sell out annually; more than $12.3 million was raised in 2019.

“We were reminded that the most important part of Pops is the role it plays in providing scholarships to BC students, as Pops Off the Heights helped to launch our Be a Beacon Campaign for financial aid. Thanks to the generosity of so many we have raised $150 million thus far, a remarkable result that will grow when Pops returns to the Heights in September," Husson said.

The CASE judges lauded the execution of “Pops Off the Heights”—which won in the category of Special Events/Online Fundraising—as well as its strong engagement with audiences, both during and after the event.

Registration was free and attendees were invited to make contributions to support Boston College students. The livestream drew some 5,500 registrants, and more than 1,400 gifts were received through the event, in addition to an outpouring of gratitude from alumni, parents, and friends who appreciated the ability to connect with Boston College. Organizers say many attendees cited the importance of being able to engage in a time-honored tradition during a time of uncertainty, as well as the comfort of seeing the campus, even from afar.

Engagement with the University was critical, as the usual formats for reaching out to the BC community had changed so significantly due to COVID-19, organizers said. Audience feedback underscored the success of the event:

“It was so well done. It is quite a challenge to shift such a well-loved and anticipated event to a virtual format. Probably the biggest strength was how well the BC mission and the BC experience were communicated to the audience…”

“Thank you for not skipping the tradition this year. These unifying events are needed more than ever…”

“This evening was different than all the previous ‘Pops on the Heights,’ but it was uplifting, exhilarating, and consistent with sharing the core values of this amazing University.”

“This year’s CASE Circle of Excellence Awards highlight the creative, nimble, and innovative approaches our members bring to championing the success of their institutions,” said CASE President and CEO Sue Cunningham in announcing the awards earlier this month. In 2021, CASE received some 3,000 entries from 530 institutions representing 27 countries, for consideration across 100 categories.

The peer-selected and adjudicated awards "honor institutions worldwide whose talented staff have advanced their organizations through their resourcefulness and ingenuity,” according to CASE.