"The Show @ 6: BC and the Common Good" turns lens on racism as it explores pressing contemporary topics

"The Show @ 6: BC and the Common Good," the live, twice-weekly, hourlong virtual talk show⁠ co-hosted by BC faculty, administrators, students and friends⁠, kicked-off on May 19 with actor Chris O’Donnell '17, H'17, and like his CBS action drama "NCIS: Los Angeles," BC's online fireside chats have proven to be a hit.

Topics for the first seven shows addressed the BC community’s response to the effects of COVID-19, the enduring challenges of the marginalized, our own resiliency and solidarity, and fortifying human dignity throughout the world. While these episodes inevitably exposed the racial disparities in health care, employment, and education that put black Americans at greater risk for the coronavirus than whites, the deeper, systemic racism in the nation epitomized by the brutal murders of George Floyd, Ahmaud Arbery, and Breonna Taylor will take center stage for the remainder of the series.

"We’ve asked our future hosts⁠—whether they’re discussing prisons, food insecurity, athletics, or Jesuit accompaniment in vulnerable times⁠—to specifically ask about racism in its many forms," said Vice Provost for Global Engagement James Keenan, S.J., one of five show producers.  "We know that through solidarity and a commitment to the common good, we can beat COVID-19, but we must be no less committed to defeating the virus of racism that touches all of us and destroys the lives of so many. Hopefully, through this show, we will come closer to ending both of these threats." 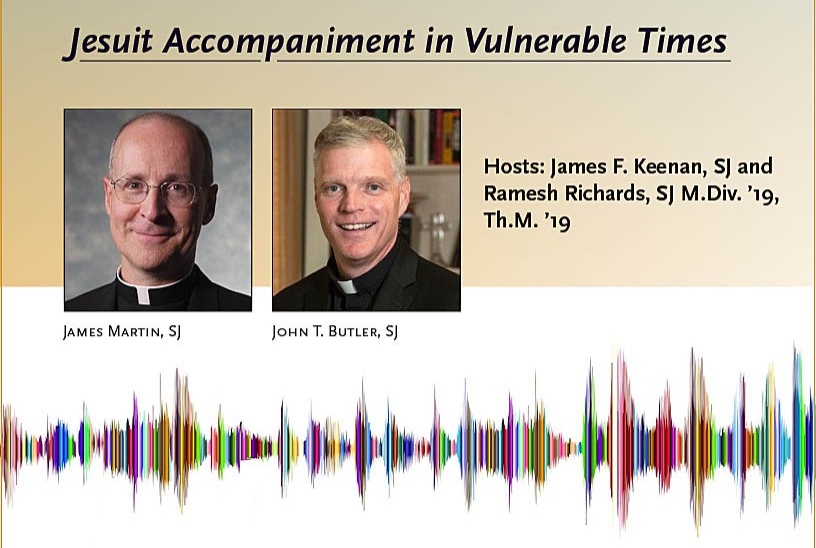 Airing at 6:00 p.m. ET on Tuesdays and Fridays via a Zoom platform capable of hosting 1,000 viewers, the shows attracts an average—and ever-increasing audience—of approximately 400 viewers based in the U.S. and abroad, in countries including Brazil, Malaysia, Australia, Canada, Netherlands, and Italy. Most viewers watch the show in its entirety.

On Friday, June 12, the focus will be on food insecurity in a discussion hosted by Tara Pisani Gareau, associate professor of the practice and director of the Environmental Studies Program, and Evey Satterfield '20.  Guests will include Navyn Salem '94, H '12, a Boston College trustee and founder and CEO of Edesia, a nonprofit social enterprise working to combat global malnutrition; Mary Lou Bozza '03, director of Development at Haley House soup kitchen in Boston; and Lori Niehaus '18, co-founder of Feed the Frontline in Chicago.

Themes for upcoming segments include: “U.S. Political Life & the Common Good”; “Homelessness”; “Global Public Health”; and “Race & Boston: The Story of Dorchester.” The series ends on August 14; for a full schedule, to register, or view previous episodes, go to bc.edu/showat6.