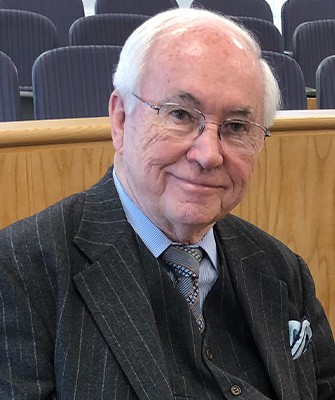 Tom Carey '65 is an attorney at Hogan Lovells. He currently teaches in the Amicus Brief Clinic and coaches the School's National Moot Court Team. He has been on the Adjunct Faculty for more than a decade, teaching a seminar in Appellate Advocacy and working with various moot court programs. He has had a long association with the school as a student, faculty member, and active alumnus. After earning an AB in government, Carey took his LLB (J.D.) from Boston College Law School in 1965, receiving several academic awards. He also holds an LLM degree from Harvard Law School. Following clerkships with Judge Caffrey and Judge Murray in the United States District Court for the District of Massachusetts, he spent a decade in full-time law teaching at Suffolk and Boston College Law Schools, teaching a wide variety of courses and working with the advocacy programs. He has coached BC national championship teams in the National Moot Court Competition and the National Constitutional Law Moot Court Competition.

Carey is active across many of Hogan Lovell's practice areas, having handled numerous civil and criminal appeals in state and federal courts in more than four decades of service as an appellate advocate.

He is acquainted with issues arising out of virtually every possible sector of commerce and industry, successfully briefing and arguing cases on appeal to the Massachusetts Supreme Judicial Court, the Massachusetts Appeals Court, and the U.S. Court of Appeals for the 1st Circuit.

He has briefed and argued appellate matters involving substantive legal issues related to many different legal disciplines, including but not limited to administrative law, banking and finance, civil rights and constitutional law, and corporate/securities matters. Additional issues include employment, governmental enforcement, healthcare, and intellectual property matters.

Carey is passionate about serving others, not only as an advocate for his clients, but as a teacher and a civic volunteer. He also served as the appellate attorney for the Major Violators Division of the Suffolk County District Attorney's Office, prosecuting many violent criminals and recidivist offenders.