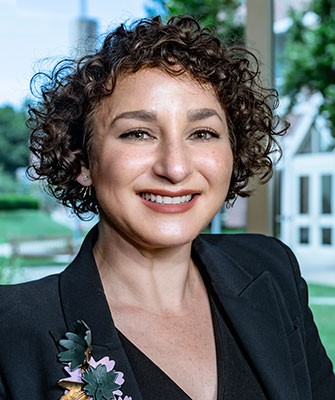 Hiba Hafiz joined BC Law as an assistant professor in 2018. She teaches and writes in labor and employment law, antitrust law, and administrative law. Her work focuses on strengthening workers’ bargaining power and legal solutions to labor market concentration and inequality.

Hafiz has published articles in the University of Chicago Law Review, Michigan Law Review, Duke Law Journal, Washington University Law Review, Wisconsin Law Review, and Cardozo Law Review, among other law journals. Her writing has been featured in news and radio outlets, and academic blogs and podcasts, including the New York Times, The Atlantic, WBUR, Columbia Law School Blue Sky Blog, and Our Curious Amalgam. She also serves as an Expert Advisor to the Federal Trade Commission, an affiliate fellow with the Thurman Arnold Project at Yale University and as a Fellow with the Roosevelt Institute.

Between 2011 and 2013, Hafiz clerked for Judge Juan R. Torruella of the U.S. Court of Appeals for the First Circuit and Judge José L. Linares of the U.S. District Court for the District of New Jersey. After clerking, she practiced law in the Antitrust Practice Group at Cohen Milstein Sellers & Toll in Washington, D.C., where she represented plaintiffs in antitrust class actions against pharmaceutical companies and employers. Hafiz left practice to become a Harry A. Bigelow Teaching Fellow and lecturer at the University of Chicago Law School, where she taught legal research and writing and a seminar on work law in the new economy.

After graduating with a B.A. from Wellesley College, Hafiz completed a Ph.D. in comparative literature at Yale University. During her doctoral program, she served as a union organizer for graduate students and joined broader campaigns to organize service sector workers. She enrolled in Columbia Law School to further study workers' rights. After graduating in 2010, she represented farmworker victims of trafficking as a David W. Leebron Human Rights Fellow at the International Rights Advocates.