Profile: The Gospel of Matthew 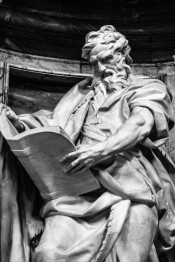 This Gospel was apparently written in the mid-80s. The traditional point of origin is Antioch in Syria, although some favor nearby Damascus or Galilee. It was plainly written by a Jewish scribe who is very extremely familiar with Israel’s Scriptures. The author may see himself as the “scribe trained for the kingdom of Heaven . . . who brings out of his treasure what is new and what is old.” [13:52]

The author writes in a very Jewish church, both demographically and in self-understanding. There are Gentile members, but they are expected to obey Torah norms [22:11-14], possibly including circumcision. Writing in a predominantly Jewish community of believers in Jesus as Lord, the Evangelist is competing with other leaders for influence in Judaism in the power-vacuum left by the destruction of the Temple in the year 70. It is crucial to note that Matthew’s church is one strand of first-century Judaism. Matthew considers himself to be Jewish, indeed to be more authentically Jewish than other Jewish groups, because he follows the Torah as authoritatively taught by Jesus. Other post-70 Jews interpret the Torah according to different norms, particularly the Pharisees, whose traditions greatly contributed to the birth of rabbinic Judaism. Matthew is thus in competition for the heart and soul of Judaism with local Pharisees (hence, their intensely negative portrayal in Matthew’s Gospel). The core of the debate is who interprets the Torah correctly.

Therefore, the Matthean Jesus “comes not to abolish the Law, but to fulfill it” [5:17]. Those who advocate the negation of the least of the Torah's rules are least in God's Kingdom [5:19]. (This may be aimed at Christians like Mark, whose Gentile context led him to show Jesus nullifying kosher laws [Mk 7:19].)

All of this leads to the conclusion that Matthew thinks of Jesus as sort of a Living Torah. Hence the icon for this Gospel is a Torah scroll. The Matthean Jesus is apparently the personification of the Wisdom of God, who in Israel’s Scriptures was with God at the creation, took up her abode in Israel, dwelt in the Temple, and was enshrined in the Torah. She, like the Matthean Jesus, is the one whose yoke is easy and whose burden is light, and who gives comfort to those who come to her [Compare Mt. 11:19, 28-30 with Sirach 6:18-37; 24:19-24; 51:23-27]. She is also one who is typically rejected by the mortals to whom she appeals.

As the Living Wisdom of God, Jesus’ teachings must be observed. Those who just cry “Lord, Lord!” will not enter the Kingdom, but only those who do the Father's will [7:21; see also 25:31ff]. The Matthean church is to put the Torah of Jesus into practice, with a particular emphasis on reconciliation and forgiveness [5:23-24; 18:23ff], using extreme measures only as a last resort [18:15-17]. The Gospel fittingly concludes with a final emphasis on Jesus as Teacher: “Go, therefore, and make disciples of all nations . . . teaching them to observe all that I have commanded you.” [28:9-10]

The main christological idea in Matthew is that Jesus is the definitive teacher of the Torah because he himself personifies it. His instructions on love and forgiveness must be put into practice in the Church. Authentic discipleship is thus defined by doing what Jesus commands.