Eric Charette MSW '16 found inspiration for life and career in his adoptive parents' devotion to 230-plus foster children.

BC School of Social Work student Eric Charette—above with his adoptive mother, Mary—found inspiration for life and career from his parents' devotion to foster children. (Photo by Lee Pellegrini)

Empathy is regarded as an important quality for social workers to have, and Boston College School of Social Work student Eric Charette will have plenty to call upon when he joins the profession, especially when it comes to helping children and families.

Charette, who will receive his MSW degree at Commencement on May 23, was a foster child—one of some 230 who were cared for by Fall River couple Mary and Paul Charette over three decades. He came to the Charettes when he was three years old, and later was adopted by them.

The years Charette spent living with Mary and Paul Charette—“Nana and Papa” as their children called them – were full of love and laughter, sadness and change, and the presence of numerous young lives. Paul died in 2010, but Mary has continued this long legacy of devotion to children in need of a loving home.

As Charette has settled into adulthood, his parents’ unstinting commitment has provided a model for his personal life, but also his professional one, during which he has made a career transition from the military to human services.

Among the things Charette has learned from Nana and Papa, and his many siblings, is that family is a matter of “bond, not blood,” quoting author Richard Bach. It’s a lesson he feels is an important one for those whose job is to assist foster children and families in finding support and services they need. 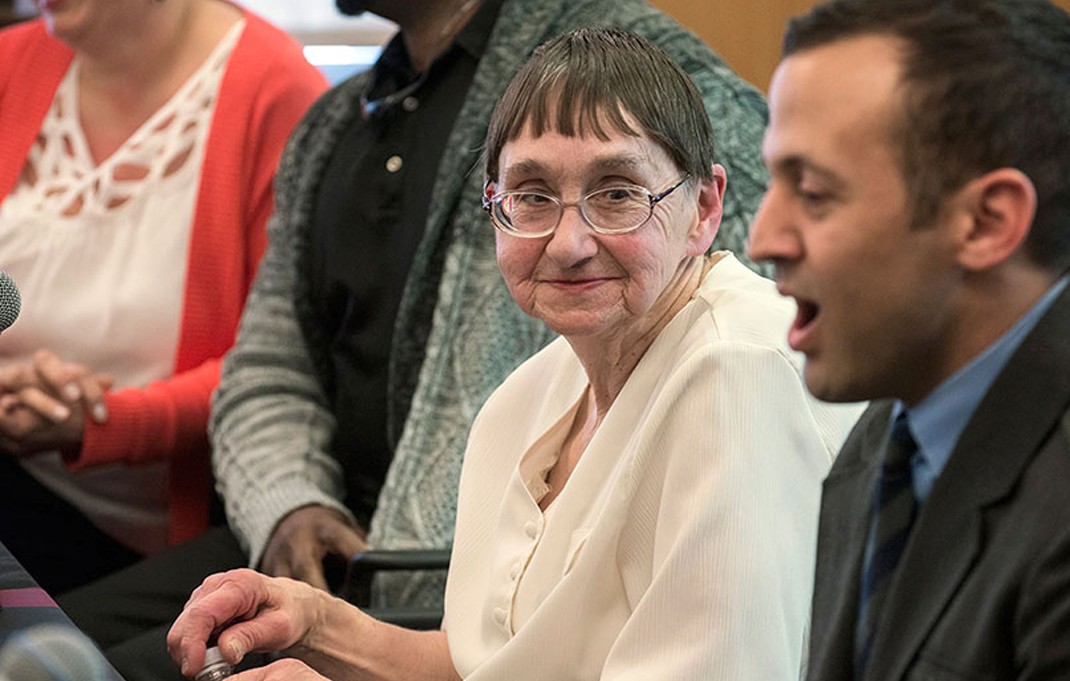 BC School of Social Work student Eric Charette and his family shared their story with the Boston College community at a panel discussion hosted by BCSSW’s Children Youth and Families program, Special Interest Group on Adoption and Foster Care and Social Workers for Social Justice group. (Video by Ed Hayward; edited by Sean Casey. Photo by Lee Pellegrini)

“I understand the challenges facing social workers—long hours, not enough pay, lots of stress—but too many of them read a case file and think they understand everything about the child. I come in with a different approach: The child and his/her family, they are the experts of their lives.”

Charette and his family shared their story with the Boston College community, at a panel discussion hosted by BCSSW’s Children Youth and Families program, Special Interest Group on Adoption and Foster Care and Social Workers for Social Justice group. Charette was joined by his mother, brother Paul, sister Addy and her husband – who are foster and adoptive parents themselves—and moderator Adam Pertman, president and founder of the National Center on Adoption and Permanency.

The event was a meaningful one for Charette: an opportunity not only to introduce his BCSSW friends and peers to his family, but to have them hear first-hand the concerns and insights shared by many foster families. As he prepares for graduation, Charette finds himself reflecting on the path that brought him to this new direction in his life.

“I barely remember the social workers I had as a kid, because they were always changing,” he says. “But I just assumed that everyone had a social worker.”

Growing up, Charette says he was intrigued at the differences in behavior between himself and his two brothers – “Why is it easier for me to listen to Mom than it is for them? What made me who I am?” he recalls thinking – and decided he would study psychology. But feeling he needed a different kind of environment, Charette joined the military – also in part to help pay for school – where he got some human services experience as a mental health specialist.

'To children in need, she always says yes.' Read more about the Charette family in the Boston Globe.

Charette eventually earned a psychology degree from University of Massachusetts-Dartmouth, and then decided to re-enter the military through the Providence College ROTC program. This time, however, he wound up working with field artillery, and was deployed to Iraq.

But Charette realized that the military “wasn’t my calling,” and when his deployment was over he searched for a new vocation. His brother Paul, a therapist, suggested he consider studying social work, and Charette began looking at programs. BCSSW caught his eye, and not just for its top 10 ranking.

“I’d recently rediscovered my faith in Catholicism, and I liked the school’s mix of religiosity with social work,” he says. “I just really felt I belonged.”

One of the members of the BCSSW community with whom Charette found a strong connection was Donahue and DiFelice Professor Ruth McRoy, a national expert on adoption and foster care, who directs the school’s Special Interest Group on Adoption and Foster Care.

“She’s a real mentor, and she brought me into a world I didn’t know existed,” he says. “I was mad about the system I grew up with, and she talked about all the subjects that had been of concern to me. I felt like I had a lot of closure, and so now I can speak not just from personal insight but with an educational perspective.”

Says McRoy, “Eric is very impressive in a number of ways. Not only has he been willing to come forward and describe what his life and his family’s life has been like, but he has a firm commitment and desire to give back and help others.”

Once he gets his degree, Charette says he would contemplate returning to the military to work with families, or perhaps the Veterans Administration.

“I know, though, that I’ll be connected with children,” he says, and he has already gotten a lifetime of best practices on which to draw.

“What I respect about my mother is, even when she had a tough case, she always stuck with it and did whatever she could for the child,” he says. “Kids can’t always communicate in a way that social workers can grasp. But Nana, she’s always been able to understand – no matter how bad the trauma, she finds a way to get through.”

Boston Globe: 'To children in need, she always said yes.'