A crusader for peace in Northern Ireland, the Nobel Prize winner forged a strong relationship with Boston College

As he shepherded Northern Ireland’s peace prospects through tensions, uncertainties, and setbacks, John Hume—the Nobel Peace Prize winner who died Monday at age 83—forged a strong relationship with Boston College during the 1990s.

Hume became for all intents and purposes the University’s Northern Ireland correspondent, appearing regularly on campus over the course of the decade to offer his insights as one of the key authors of what would eventually become the Good Friday Agreement ending “the Troubles.” But while universally regarded as Northern Ireland’s leading Catholic politician, Hume went beyond straightforward political analysis or partisan rhetoric, instead expressing his confidence in the peace process and, above all, a concern for the many people—Catholic and Protestant alike—who had suffered through decades of violence and hatred. 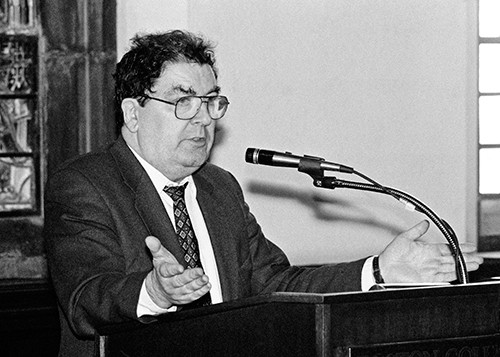 “In many ways, we are all victims in this conflict,” Hume said during his visit to BC in 1999, a year after the Good Friday Agreement and his subsequent sharing of the Nobel Peace Prize with David Trimble, his Protestant counterpart in the peace process. “The best we can do for the dead is to make anew Northern Ireland as a monument for them and to leave the past behind us.”

The University formalized its bond with Hume by awarding him an honorary Doctor of Laws degree in 1995, months after he had taken part in a controversial meeting with Sinn Fein leader Gerry Adams that resulted in the Provisional Irish Republican Army calling a ceasefire. Speaking at Commencement that year, Hume—invoking the traditional United States motto of “E pluribus unum (out of many, one)”—urged the Class of 1995 to seek rational, non-violent solutions and work for tolerance and justice.

“Your generation is a generation that is living through the greatest revolution in the history of the world,” he said. “The technological, telecommunications and transport revolution, which has changed the whole nature of the world in which we live, has made it a smaller place to live in. The essence of unity in this new world is the acceptance of diversity.”

Hume later became a visiting lecturer in the History Department, where he co-taught a class on the historical origins of the Northern Irish conflict with Robert Savage, a faculty member in BC’s Irish Studies Program, and Queens University historian Alvin Jackson, who at the time was the Burns Visiting Scholar in Irish Studies at BC. He also was invited to speak at one of the University’s signature community events, the Alumni Association’s traditional Laetare Sunday Communion Breakfast.

“John Hume will be remembered as a tireless advocate of peace and reconciliation and the architect of the Good Friday Agreement, ending 30 long years of immense suffering in Ireland and Great Britain,” said Savage, appointed earlier this summer as interim director of Irish Studies. “His was a critical voice that influenced presidents, prime ministers and paramilitaries. He was not afraid to take risks in the name of peace, his dialogue with Sinn Fein and the IRA was highly controversial, but critical in pushing the peace process forward.”

Savage was among those at BC who saw, and enjoyed, the private side of Hume while also getting a glimpse of Hume’s “other” career—Hume had studied history and French in college with the intent of becoming a teacher, Savage noted, but was swept up in the effort to win civil rights for Catholics in Northern Ireland.

“During his time as a ‘guest professor,' John would usually stop in on his way to or from the White House,” Savage recalled. “With his hectic schedule we were lucky if he stayed for a few days, but he enjoyed coming into the classroom and engaging with students. Not many people knew this, but he had a wicked sense of humor and loved to give academics a hard time. The BC students enjoyed his insights, arguments and the entertaining stories he told about encountering political leaders in London, Dublin, and Washington.”

“John Hume will be remembered as a tireless advocate of peace and reconciliation and the architect of the Good Friday Agreement, ending 30 long years of immense suffering in Ireland and Great Britain. His was a critical voice that influenced presidents, prime ministers and paramilitaries. He was not afraid to take risks in the name of peace.”

Other highlights of Hume’s BC connection:

•In his first visit to BC, in 1994, Hume compared his country’s struggles to unify its Catholic and Protestant populations with America’s debates about its own diversity. “America has forgotten that they were the ones who first came forward with the lesson that unity does not mean a victory by one side over another,” he said, adding a phrase he would repeat months later at Commencement: “The essence of unity is the acceptance of diversity.”

•Returning to campus in 1996, almost a year after receiving his honorary degree, Hume affirmed his optimism for the upcoming Irish-British negotiations despite the collapse of the 17-month ceasefire by the Provisional IRA. There was too much of a groundswell for peace, he said, and it came from many sources besides Northern Ireland: “We are living in a smaller world today. When your ancestors left Ireland, we would have an American wake, because we knew we would likely never see them again. But we are all much closer now because of technology and I think we therefore share the same hopes.”

•Speaking in Gasson 100 in March of 1997 as the peace talks plodded along with little apparent progress, Hume held fast to his upbeat tune. “For the last nine months, the British and Irish governments, and representatives from Northern Ireland, have been together in the same room. They haven’t reached an agreement yet, but the fact that they’re all together in one room is huge progress.” Referring to one of Northern Ireland’s most strident and visible political leaders, Hume added, “Who would have thought five years ago that [Rev.] lan Paisley would sit in the same room as the Irish government?”

•The documentary “In the Name of Peace: John Hume in America,”  which premiered at the 2017 Boston Film Festival, included archival material from the University’s John J. Burns Library. The film traces Hume’s efforts to enlist prominent U.S. politicians—including BC alumnus Thomas P. “Tip” O’Neill Jr.—in securing a peaceful solution to the conflict in Northern Ireland. Director Maurice Fitzpatrick used a number of Hume-related items in the Thomas P. O’Neill Jr. Congressional Papers and the archive of Northern Irish photographer Bobby Hanvey, including correspondence between O’Neill and his chief of staff Kirk O’Donnell about meetings with Hume, and statements by Hume on the death of imprisoned Irish hunger-strikers in 1981, as well as various candid and formal photos of Hume. The materials not only contributed to the film’s narrative but also its visuals.