In April 1916, a small group of republicans began a week-long rebellion in Dublin, Ireland, seeking freedom from Britain. The republicans thought—with Britain focused on World War I—that the uprising could rally the Irish public to join the fight for independence. Within days, 16,000 British troops entered the city to suppress the insurrection; by the end of the week, Dublin was in ruins and 485 people had died, including civilians caught in the crossfire.

Referred to as the Easter Rising, this milestone in Ireland’s history was, says Mike Cronin, academic director of Boston College Ireland, a “military failure.” However, due to Britain’s subsequent response to the Rising—executing 16 key leaders, interning 3,000 men and women and placing the country under military law—public opinion shifted. The event "ultimately transformed Ireland’s relationship to Britain and would eventually lead to the creation of an independent Ireland in 1922,” said Cronin, who agrees with much of the Irish population that the Easter Rising is Ireland’s equivalent of America’s Independence Day. 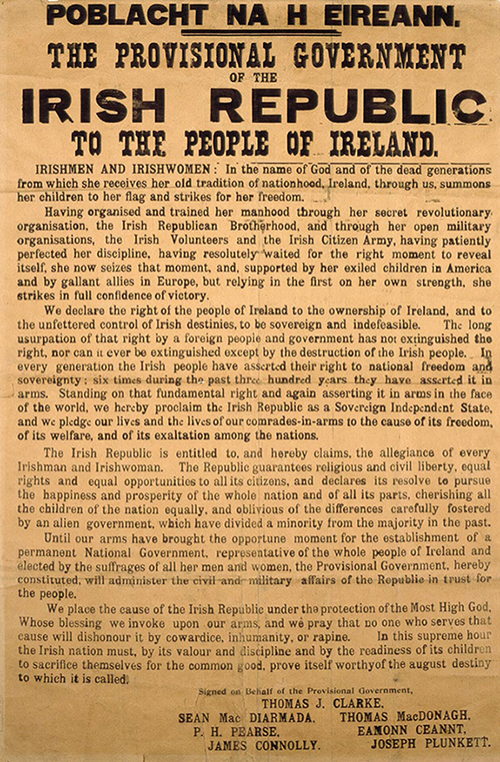 The Proclamation of the Republic 1916.

“1916 is important as it was a military move against Britain that would inspire others in their fight for democracy or colonial freedom.  [1916] was cited as inspiration by those who led the 1917 Russian Revolution and the nationalist movements in India and Southern Africa,” he said.

One hundred years after the rebellion, 2016 “marks the idealism of the men and women who proclaimed the Irish Republic and challenged the might of the British Empire,” said Cronin.

The centenary is being commemorated on both sides of the Atlantic. At Boston College, U.S. Congressman Richard Neal and Boston Mayor and alumnus Marty Walsh reflected on the Rising during a visit to campus earlier this semester; and an international conference and commemorative concert were spearheaded by the Center for Irish Programs, which comprises all the University's Irish initiatives, including Boston College Ireland.

In Dublin, BC's focus is on the myriad of events that would change Ireland between 1913-23—with attention to ordinary life during the time period, as well—through the Century Ireland project, a collaboration among Boston College Ireland, state broadcaster RTÉ, and national cultural institutions.

Century Ireland is an online newspaper that details the events of 100 years ago in real time, as they occurred. It “highlights the big stories of the day, but also focuses on the mundane reality of life such as housing, sporting events, court cases, fashion, the cinema, or shopping,” Cronin said, to offer visitors a glimpse into the lives of the Irish people during the years of the fight for freedom. The goal is to juxtapose "the historical context of the political changes in Ireland with the reality that most people were simply getting on with their lives," he said. 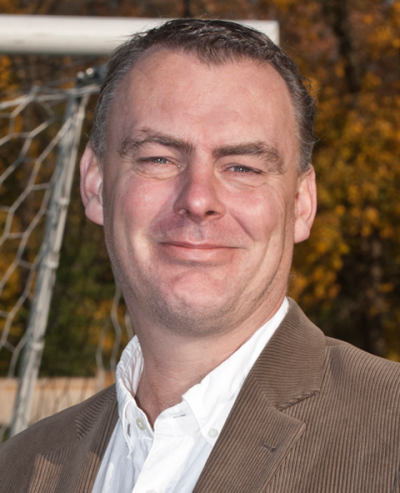 Though the events of the Easter Rising occurred a century ago, the history easily lent itself to modern technologies. “People across the globe can engage with the stories we are telling and access material from Irish archives and libraries that they otherwise couldn’t visit,” noted Cronin.

Even social media plays a role: @CenturyIRL—the Century Ireland Twitter account, active since May 2013 to coincide with the start of the project—is live tweeting the events of Easter Week 1916 in real time, to allow followers to experience occurrences of a century ago as if they were happening today; “to see the past as something highly fluid and in no way fixed to a certain outcome,” according to Cronin.

Another BC Ireland initiative designed to give modern audiences a textured experience of the Rising results from a partnership with Google and Ireland 2016, the government body overseeing official commemorations, to create a Google Street View Tour of Dublin 1916.  Narrated by Irish actor Colin Farrell, the interactive tour provides viewers with an engaging time travel experience, enhanced by historic photos and videos.

“BC was brought in to advise on the historical content, source images for the site, and help create the script. We were best placed to know the story of 1916,” says Cronin.  “If you don’t know anything about Ireland and 1916 [the Google Street View tour] is a great place to start.”

Cronin also was interviewed at length for "1916: The Irish Rebellion," a documentary produced by RTÉ and narrated by Irish actor Liam Neeson that aired in the U.S. on PBS stations. 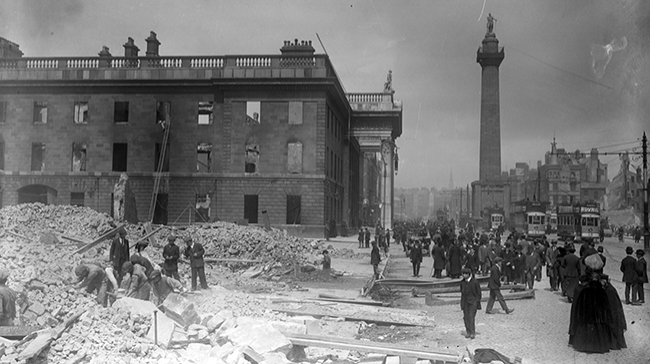 The shell of the General Post Office in Dublin in the aftermath of the 1916 Rising.

"1916" provides viewers with historical photos and videos that, like the Google Street View tour, visually showcase the effects of the rebellion. In addition, the St. Patrick’s Festival in Ireland reached out to Cronin to learn how to integrate 1916 into this year's event; a BC Ireland research team assembled a supplement for the March 27 Easter issue of Ireland’s Sunday Business Post featuring essays by Cronin, Mary Daly of The Royal Irish Academy and Katherine McSharry of the National Library of Ireland, among others; and BC-Ireland helped RTÉ with Reflecting on the Rising, a series of events across Dublin on Easter Monday.

Despite BC Ireland's many contributions to showcasing the milestone, Cronin believes there’s still work to be done in promoting understanding of the events of the Easter Rising, particularly the questions they raise about using violence to attempt to gain political freedom.  “Given the fact that the Rising was led by a small number of radicals acting against public opinion and with no popular mandate, it asks hard questions about the rights of the majority and their ability to be heard,” he said.

A Google Street View tour, created in partnership with Boston College Ireland and Ireland 2016, provides an interactive experience of Dublin locations related to the Easter Rising.

"It's worthy of examination to understand how religion is linked to political movements for independence,” he added, as the Rising is wrapped up in the iconography of Catholicism.

And, “[the Rising] set the tone for the movement towards state formation across the world in the first half of the 20th century," he said. But what if the Rising never occurred? Cronin believes the Home Rule bill, suspended in 1914 due to World War I, would have been enacted, allowing for the creation of an independent Ireland that was still tied to Britain. And many historians argue, he said, "that despite the rebellion, the 1919-21 Anglo-Irish War and the 1922-23 Irish Civil War, the Irish didn’t achieve much more that they had been offered in 1914." 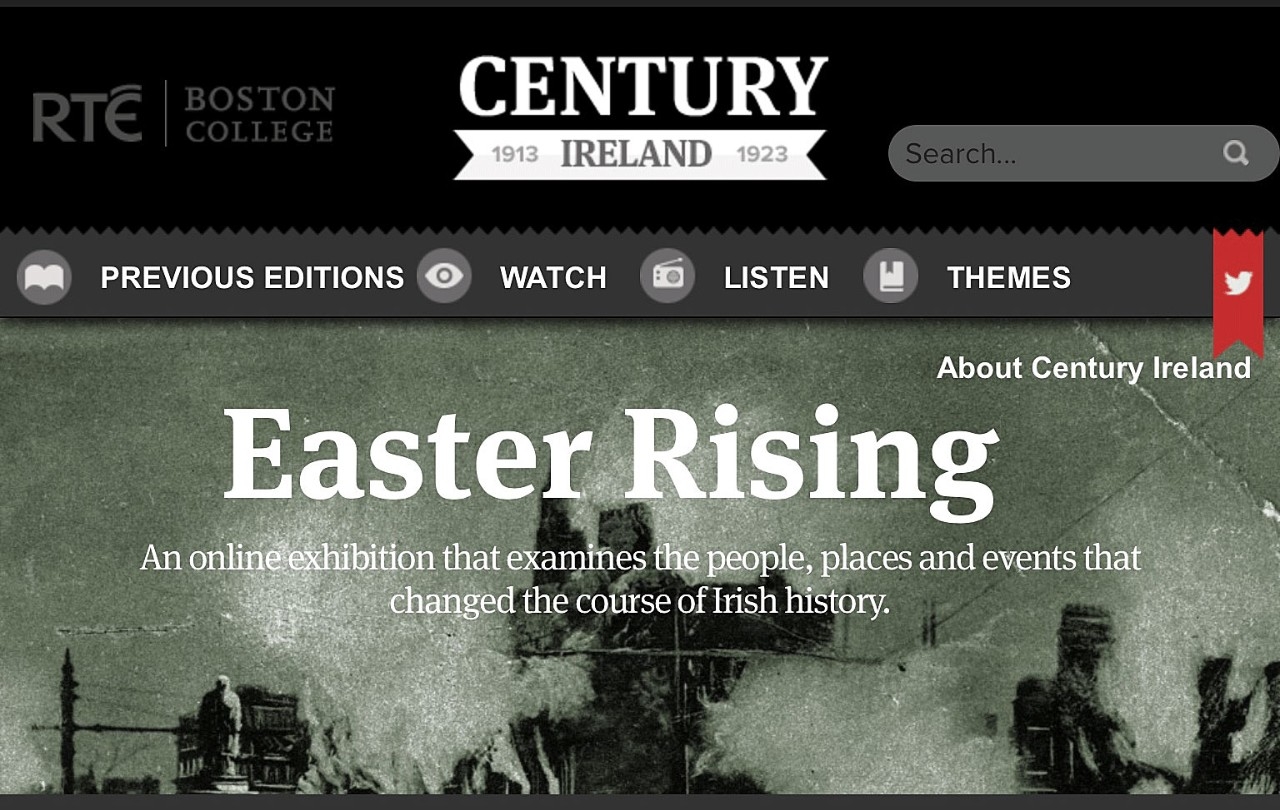 Century Ireland, an online newspaper that details the events of 100 years ago as they occurred, devotes a special section to the Easter Rising.

As important as the 1916 Easter Rising is in Ireland’s journey towards independence, it’s one of many events in the Century Ireland effort to cover the history of 1913-23 in its entirety.  Cronin notes that Boston College is fortunate to be a key leader in presenting public history “in an innovative and informed manner.

“By 2023, this work will be the single most important legacy project emerging from the period," he said.