A red bandanna left in tribute beside the name Welles Remy Crowther at the National September 11 Memorial. The 1999 BC alumnus lost his life leading others to safety following the 2001 attack on the World Trade Center.

The inspirational story of Welles Remy Crowther '99, who died on 9/11 after courageously leading strangers to safety in the minutes prior to the collapse of the World Trade Center's South Tower, is the subject of a new book, The Red Bandanna, by award-winning ESPN correspondent Tom Rinaldi.

Taking its name from the trademark handkerchief Crowther always carried, the book looks at the 24-year-old's selfless acts on that tragic day 15 years ago, as well as the upbringing that shaped the young man, who worked as an equities trader for Sandler O'Neill and Partners but still harbored the childhood dream of becoming a firefighter.

Rinaldi's interest in the story grew out of his work writing and reporting a 2011 ESPN documentary called 'The Man in the Red Bandanna.' He thought there was a larger story to be told.

"The feature, which first aired in 2011, was more than 13 minutes in length," Rinaldi says in a Q&A with the publisher, Penguin Books. "That's a long time on television, but there was so much more to tell about Welles Ñ before the day his life ended, and in the aftermath of his death.

"To build a fuller portrait of who he was, where he came from, the family who raised him, and the experiences that shaped him, to build a context around the choice he made in the final hour of his life, that required a fuller telling. A book was the right venue to do that." 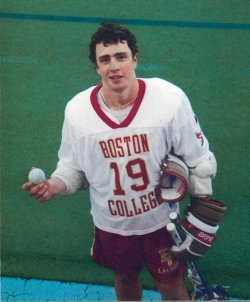 "People see the fallen, beat-up world around them and ask: What can I do? Maybe: Be like Welles Crowther. Take your bandanna, change the world." —Peggy Noonan, Wall Street Journal

Each year, the University remembers Crowther at the "Red Bandanna" football game and hosts the Welles Remy Crowther Red Bandanna 5K to benefit the Welles Remy Crowther Charitable Trust. This year, the game takes place Oct. 7 and the run on Oct. 15. In addition, Crowther's name, along with the names of the 21 other alumni who lost their lives on 9/11, is inscribed on the Boston College Memorial Labyrinth.

After the towers fell, Crowther's parents, Jefferson and Alison, came to accept his death, but the mystery of his final hours painfully lingered.

Months after the attacks, Alison Crowther read a news account from several 9/11 survivors who said they and others had been led to safety by a stranger, carrying a woman on his back, down nearly 20 flights of stairs then returning back up to search for others. The survivors never got his name, but one remembered a single detail clearly: the man was wearing a red bandanna.

Rinaldi says he first learned of Crowther's story in 2010 from ESPN producer Drew Gallagher, a Crowther friend and fellow member of the BC Class of 1999.

"Welles' choice, and his valor, struck me as both specific and symbolic Ñ as one of many outside of uniform who acted selflessly, and died tragically, amidst the unspeakable horror of that day,Ó says Rinaldi, the recipient of 15 Sports Emmy awards and six Edward R. Murrow awards. "He passed through the same doors, breathed the same air, took the same elevators, as my brother did, who worked for more than 15 years on the 81st floor of the south tower."

Rinaldi says the book offers a view into a single life among the 2,977 people who died on 9/11. Central to Crowther's life was a family tradition of volunteer firefighting and Crowther volunteered with his father at Empire Hook & Ladder Company No. 1, near their Nyack, NY, home.

"That ethos—of answering the call, of rushing toward chaos, of helping others who face danger—took root deep inside him, and never left," Rinaldi says. "A month before he died, he called his father and told him he wanted to leave his job in finance to become a member of the FDNY.  After his death, cleaning out his apartment, his father found his application, filled out."

The veteran reporter says no story he's reported during his career has touched him more deeply than that of Crowther and his parents.

Read an excerpt from the book in Parade magazine

In addition to the connections they have maintained with BC, the Crowther family has established a scholarship fund in their son's honor and Welles Crowther's story is a central feature of a character-based school curriculum.

Rinaldi says he often carries a red bandanna in his back pocket. "In a time of great division and loud discord in our country, where so much separates us, the bandanna exists, as does Welles' life and its final hour, as symbols of what might bind us together—in our caring for one another," he says.

"I hope the red bandanna might exist as a red badge of courage for our time, as a reminder of the common fabric in our humanity." 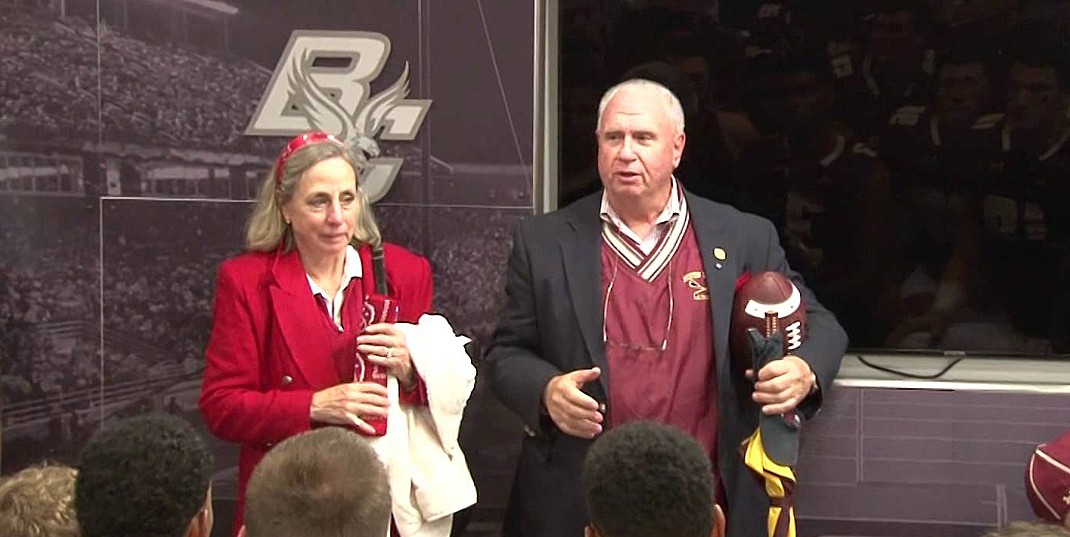 The Red Bandanna by Tom Rinaldi