They are among a pioneering group of Catholic schools that took a calculated risk by adopting a dual-language curriculum, immersing elementary school students in two, sometimes three languages.

Now they are running out of seats, according to educators from the 18-school Two-Way Immersion Network for Catholic Schools (TWIN-CS), established four years ago by the Lynch School of Education’s Roche Center for Catholic Education. Just 19 of the more than 5,300 Catholic elementary schools in the U.S. have adopted the curriculum.

“Space – space is the biggest challenge we face in the future,” said Kristina Collins, the dual language program director at Archbishop Borders School in Baltimore, MD. 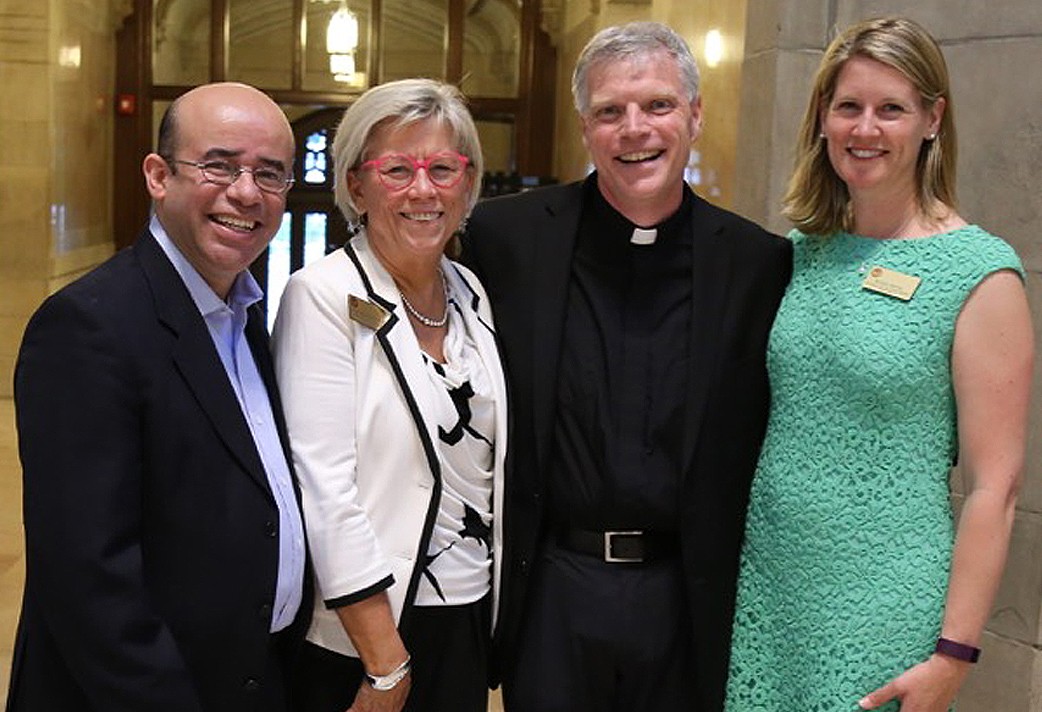 The school’s experience mirrors how families are responding elsewhere across the country, according to other school leaders, who were among the 110 network educators who attended the Roche Center’s five-day TWIN-CS summer academy at BC’s Connors Center.

“As problems go, it is a good new one to have in Catholic education,” said Roche Center Executive Director Patricia Weitzel-O’Neill. “When we started TWIN-CS, we anticipated that these schools would help serve an unmet need of culturally and linguistically diverse Catholic families, particularly Hispanic families. But I don’t think we expected the schools to run into capacity issues so soon.”

While TWIN schools serve diverse student populations, they have struck a chord with Hispanic families, according to the Roche Center’s recent study Catholic Schools in an Increasingly Hispanic Church. The findings pointed to demand among Hispanic families for Catholic schools that offer educational excellence, affirm the language that most speak at home and honor their culture.

A dual-language curriculum is implemented one grade at a time, starting with an inaugural pre-K class and advancing annually with that group. Parent satisfaction is lowering the normal rates of attrition to public school at kindergarten and first grade, pushing many TWIN-CS schools to capacity as early as fourth or fifth grade, said Weitzel-O’Neill.

All Souls World Languages Catholic School in Los Angeles County is at capacity, with as many as 190 students slated to begin school in September in grades pre-K through six, said Principal Carrie Fuller, now in her third year at the school and a doctoral candidate in the Lynch School of Education.

Fuller said the school will need to add modular classrooms in order to proceed with the planned growth to grade eight in the next two years. She’s currently negotiating to lease an adjacent lot to accommodate new facilities.

“Our Catholic identity is the primary draw for parents,” said Fuller. “There are many dual-language schools in my area, so we face a lot of competition on that front.”

Parents also want a close-knit K-8 community for their children, she said. All Souls offers two dual-language tracks – paring Spanish or Mandarin with English – to meet the needs of the diverse community of Alhambra.

In San Antonio, Texas, Principal William Daily has also added modular classrooms to meet the demand for seats in pre-K and early elementary grades at St. Mary Magdelen School. The school’s enrollment has grown from 98 in July 2012 to 320 students this past school year, with dual language program accounting for more than 50 percent of the increase, Daily said.

There are few dual-language schools in Texas and Daily says that St. Mary Magdelen appeals to both Hispanic and non-Hispanic families seeking to ensure their children are fluent in the state’s two dominant languages.

“It is about academic excellence, but also academic exceptionalism,” said Daily, a 2000 Boston College graduate who has led the school for five years. “Parents feel like their children are getting a great education, a dual language, Catholic education with a curriculum that will prepare them not only for high school and college, but for their careers and for life in Texas, elsewhere in the U.S. and across the globe.”

Educators say dual-language schools can play an important role in the Church’s ministry to an increasingly Hispanic Catholic population. Despite efforts to increase Hispanic enrollment for the past two decades, the number of Hispanic children attending Catholic schools has remained stagnant at approximately 300,000 – just 2.4 percent of the nation’s 12.4 million school-age Hispanic children, of which approximately 8 million are Catholic.

“You can’t serve people you can’t speak to,” said Fuller. “We are a Church that celebrates Mass in all different languages. That is how we talk to God, in our native language. We can bring together language and faith.”

Gena McGowan, principal of St. Matthew Catholic School in Arizona, led her school’s adoption of a dual-language immersion curriculum in 2009. The school serves a low-income community of largely Spanish-speaking families and as a private school is exempt from Arizona’s 2000 ballot initiative banning traditional bilingual education.

“Parents choose our school so their children can get a leg up – to get what many of them don’t have – which is the ability to speak English,” said McGowan, who in May received an honorary degree from Boston College for her work. “But they want their children to be literate in Spanish too in order to maintain connections with their family members and with Mexico.”

This summer's TWIN-CS academy brought together educators to share their best practices and work with experts from BC and other organizations.

Daily said the supports from the network and the Roche Center are important for parents and the broader school community.

“Having an institution like Boston College and the BC brand connected to our school in San Antonio, Texas, has a huge impact,” said Daily. “When we talk to families, they know that this is a program inspired by Boston College, a Jesuit, Catholic institution and that gives us a lot of legitimacy. That is a huge part of the influence TWIN-CS is having on our school, our church and our community.”

The Two-Way Immersion Network for Catholic Schools (or TWIN-CS)

The Lynch School of Education