Religion and the Irish Community

A Bridge Between Communities

Morris and his family began attending Catholic services in the 1850s. This move introduced Morris to members of Boston’s Irish Catholic community, some of whom would later hire him as their lawyer. The Morris family eventually began worshipping at the Church of the Immaculate Conception in Boston’s South End, which was connected to Boston College. Morris established connections with early Boston College leaders, including Father Robert J. Fulton, S.J. In the summer of 1868, Morris traveled across Europe with his family and reminisced later about their experience riding in trains and staying in hotels without facing racial discrimination. During the trip, Morris, Catharine, and Robert Jr. stayed in Rome and had a personal audience with the Pope at the Vatican.

Robert Morris was raised Methodist. In the 1850s, however, his wife Catharine began attending services at their local Catholic parish in Chelsea, Massachusetts. Morris was initially reluctant to join the Catholic Church. It was an uncommon affiliation for Black Bostonians, and the Irish Catholic community tended to be associated with anti-abolitionist views. But, through his legal practice, Morris did have many relationships with Irish Catholics in Boston. He represented many Irish clients, advocated for an Irish militia company, and even hired Patrick Collins - a young Irish immigrant, congregant at the Chelsea parish, and future Boston mayor - to be his office boy. Despite his early reservations, Morris officially joined the Catholic Church in 1870 and remained a devoted parishioner until his 1882 death.

“Mr. Morris has for some time been a regular attendant at the Church of the Immaculate Conception, where his excellent wife has for several years been a most devout and exemplary member, distinguished for her piety and charitable zeal in every good work. They seem to have found a home in the Catholic church free from the prejudice of caste, and where all are recognized as equal before God.”

The Pilot, November 5, 1870, Report on Morris’s October 23, 1870 baptism and conversion at the Church of the Immaculate Conception 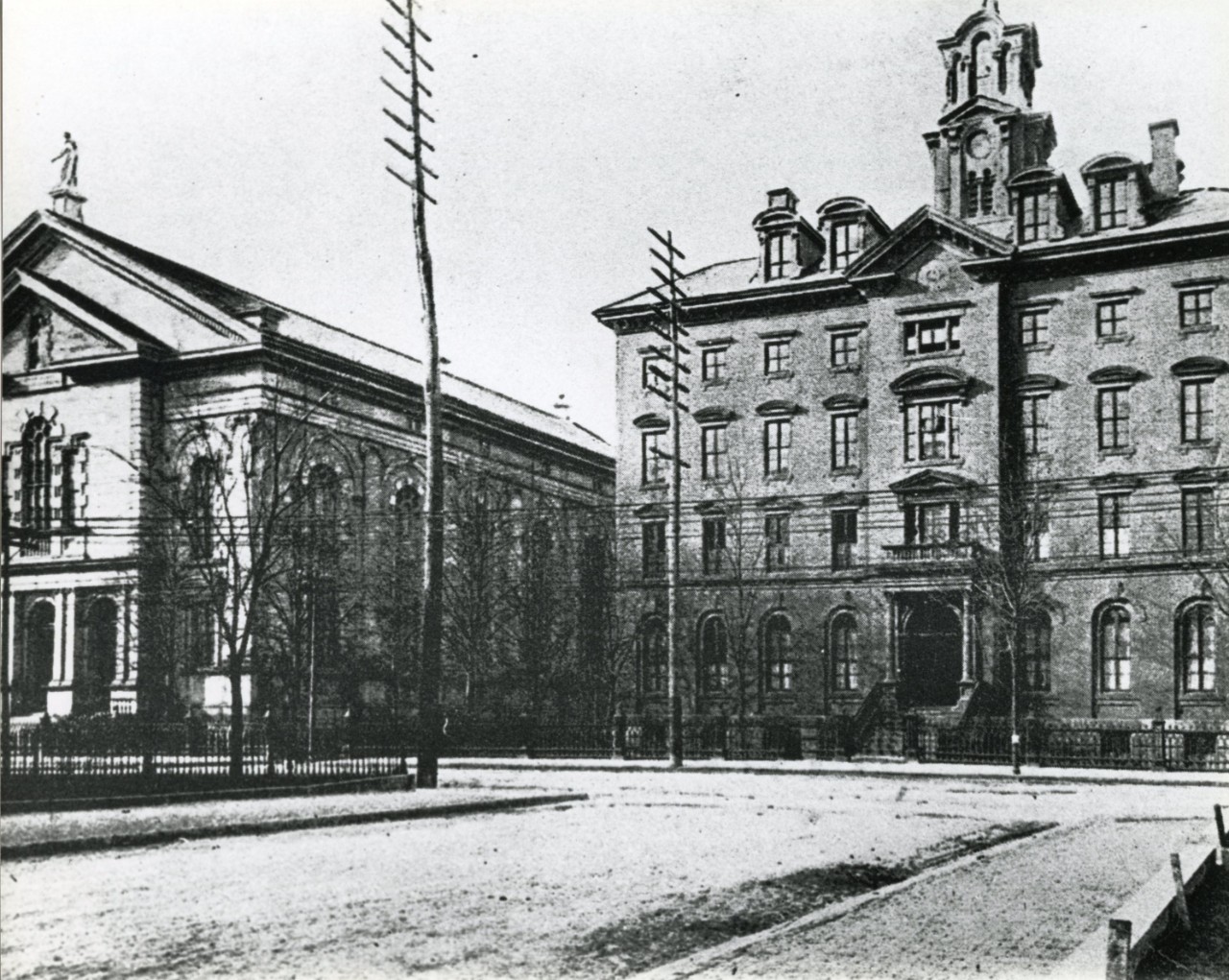 It is difficult to know exactly why Morris converted to Catholicism. Certainly, Catharine Morris’s decision to attend a Catholic church swayed him, and perhaps his long-time professional interactions with Irish immigrant clients made him amenable to the idea. He likely understood that the two communities faced extreme discrimination and were stronger if united. Additionally, Morris praised the Catholic Church for not engaging in segregated seating during services, a practice that had offended him as a boy when attending Ellis and Louisa Loring's church in Boston.

Regardless, Morris apparently was a fixture at his Chelsea parish until his family moved to the South End of Boston in the late 1860s and began attending the Church of the Immaculate Conception, the Jesuit-run church that was associated with a very young Boston College.

While his most notable cases involved clients of color, Morris became known for his representation of Irish Catholics in Boston. Morris’s work across racial, ethnic, and religious lines remains an intriguing aspect of his practice. There were significant tensions between the African American community and the largely immigrant Irish Catholic community. The Pilot, Boston’s Irish Catholic newspaper, wrote against antislavery activism and in support of the Fugitive Slave Act. Despite this, Morris’s representation was sufficiently well-known that he apparently was referred to as “the Irish Lawyer.” Morris handled both civil and criminal cases and often defended clients accused of murder or other violent crimes.

“To the Irish people and their descendants in and about Boston and vicinity, is due a large amount of credit for whatever of success our friend met with in the business of a practising attorney. To neglect to concede to this element this much, would be to do an injustice that he when living was always careful to avoid. No class of persons labored more earnestly and with truer hearts to make him financially a successful lawyer than they. Safe it is to say that three quarters of his clients were from amongst them. ” 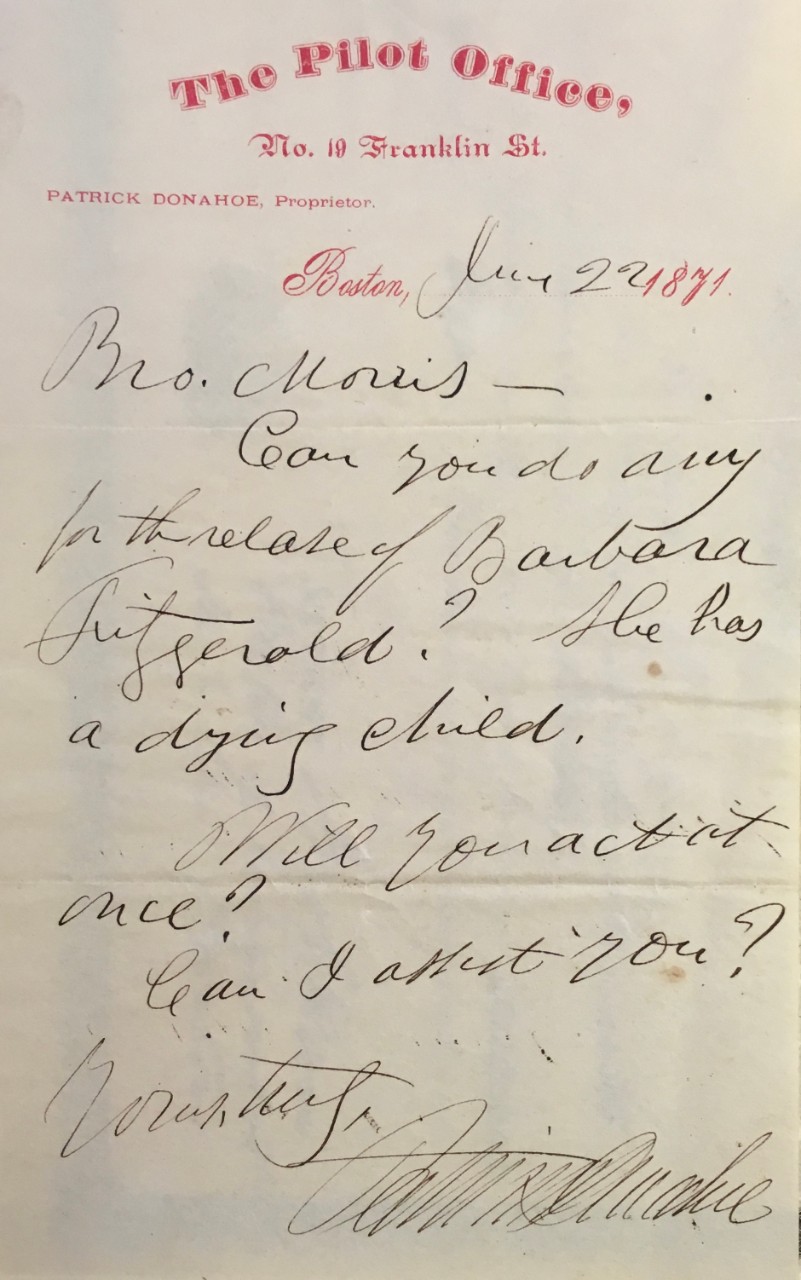 Letter to Morris from the editor of The Pilot regarding Barbara Fitzgerald. Robert Morris Papers, Boston Athenaeum.

A Plea for Morris’s Help

In this 1871 letter, Patrick Donahue, the editor of the Boston-based Catholic newspaper The Pilot, implores Morris to aid in the release of Barbara Fitzgerald, who has been arrested and has a dying child. In May 1871, the Boston Herald reported that Barbara Fitzgerald was indicted by the Suffolk County grand jury for assault and battery on Patrick Duffy. Beyond that, we do not know much about her or the legal case. A Barbara Fitzgerald does appear in the 1870 state census as “keeping house” in South Boston’s Ward 7, where she lived with her husband Patrick Fitzgerald, a laborer, and their children. Both Barbara and Patrick were born in Ireland. It seems likely that Morris answered Donahue’s request and became her lawyer, as he did for so many other Irish immigrants.

The Society of Jesus (the Jesuits) founded Boston College in 1863 to educate students from Boston’s Irish Catholic immigrant community. The school was located in Boston’s South End, and was affiliated with the Jesuit Church of the Immaculate Conception. In 1870, when Robert Morris was baptized and received into the Catholic Church, he did so at this church, next door to the main Boston College building.

Morris also corresponded with Father Robert Fulton, S.J., first dean and one of the early presidents of Boston College. Reverend Jeremiah O’Connor, S.J., then-President of Boston College, delivered remarks at Morris’s 1882 funeral service at the Immaculate Conception Church.  And around the time of Morris’s death, either he or his wife Catharine gave a portion of Morris’s personal library to Boston College. The Morris donation formed the foundational collection in English and American literature in the library of the fledgling institution.

“The Y.M.C. Association of Boston College feels deeply the loss of Robert Morris Jr., who died Dec. 26th; he was one of their most active members. The death of his father, who was a life member of the Association, only a fortnight before, was equally sad.” 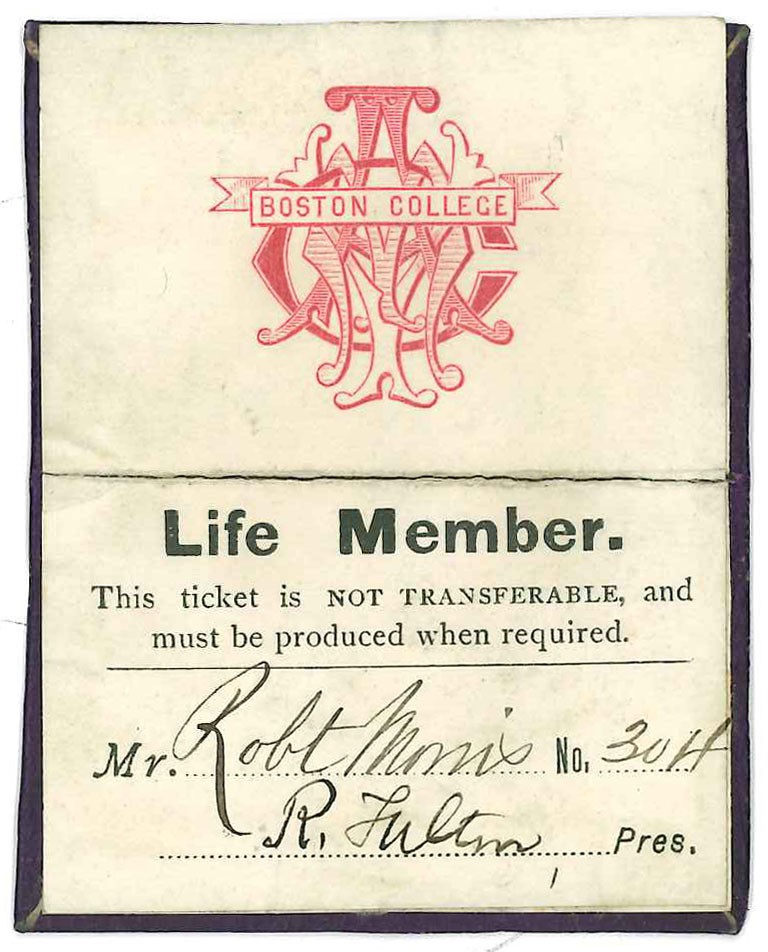 In addition to exchanging letters, Father Fulton granted Morris a life membership in the Boston College Young Men’s Catholic Association. Fulton founded the Association as a place for moral and intellectual growth. It had a gymnasium, billiards room, music room, debating societies, and a reading room and library with over 3,000 volumes.

Morris's son Robert Jr. was also involved in various capacities, including serving as the organization’s first librarian. Catharine Morris had her own connections to Boston College. She donated a tapestry to the school in 1884 and named Immaculate Conception as the residuary beneficiary in her will.