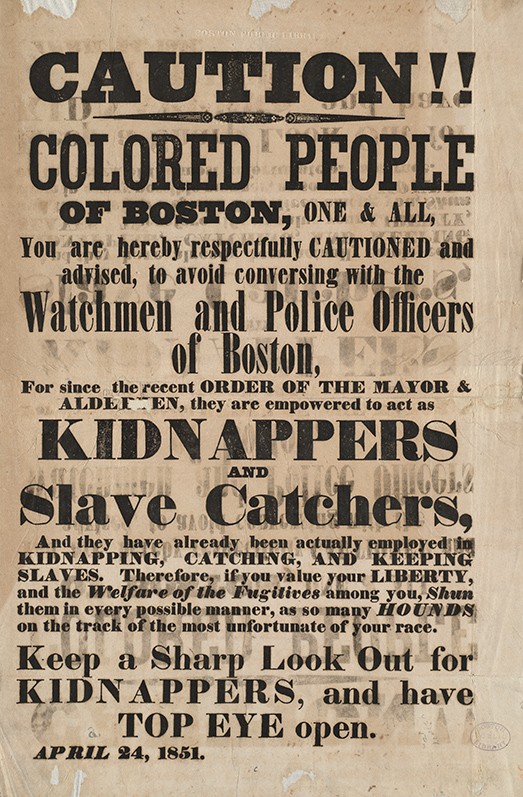 From his teenage years in the employ of Ellis Gray Loring through the end of the Civil War, Robert Morris fought to end slavery and protect fugitives from slavery, often putting himself at great risk. He regularly participated in meetings, conventions, and committees dedicated to those goals. Morris was an active member of the Boston Vigilance Committee, an interracial group that aided fugitives by providing food, money, shelter, travel fare, legal representation, and an active network of spies who alerted the community about the presence of kidnappers and slave catchers. After the Fugitive Slave Act became law in September 1850, antislavery efforts redoubled. That law allowed federal officials to arrest suspected fugitives and return them to slavery with minimal legal process, no trial by jury, and no opportunity to appeal. Morris soon became a central figure in one of the major Boston cases to arise under the Fugitive Slave Act.

“Let us be bold, if any man flies from slavery, and comes among us. When he’s reached us, we’ll say, he’s gone far enough. If any man comes here to New Bedford, and they try to take him away, you telegraph to us in Boston, and we’ll come down three hundred strong, and stay with you; and we won’t go until he’s safe.” 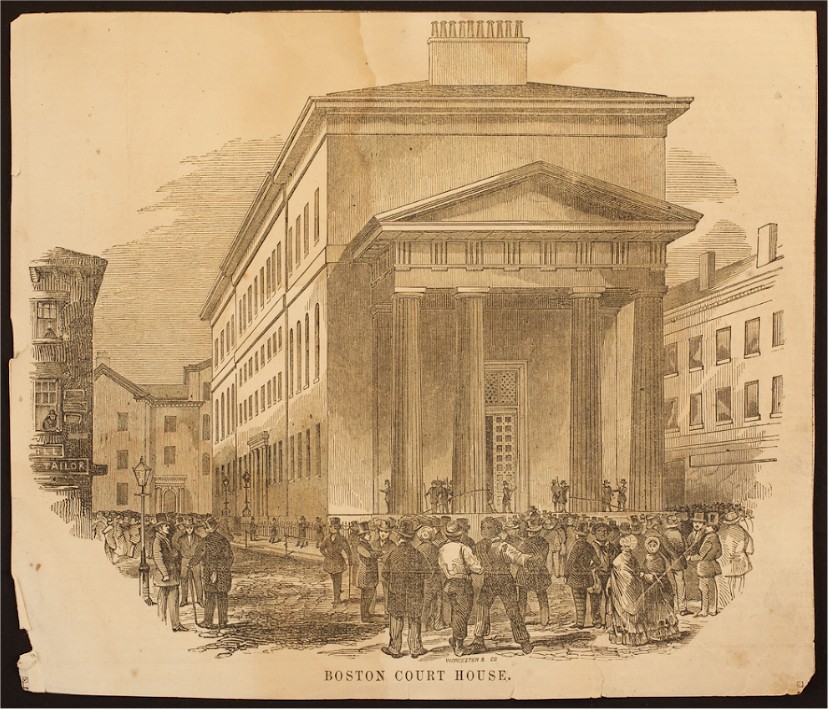 The Boston Court House at 26 Court St. where Shadrach Minkins was taken after his arrest and then rescued. Courtesy of Historic New England.

In May 1850, Shadrach Minkins escaped from slavery in Norfolk County, Virginia and settled in Boston. A few months later, the Fugitive Slave Act of 1850 became law, setting the city on edge. On the morning of February 15, 1851, Minkins left for work at the Cornhill Coffee House in downtown Boston, near the intersection of Court Street and Washington Street. Late that morning, as Minkins went about his duties as a waiter, federal officials served him with an arrest warrant alleging that he was a fugitive from slavery in Virginia and took him to the nearby courthouse. 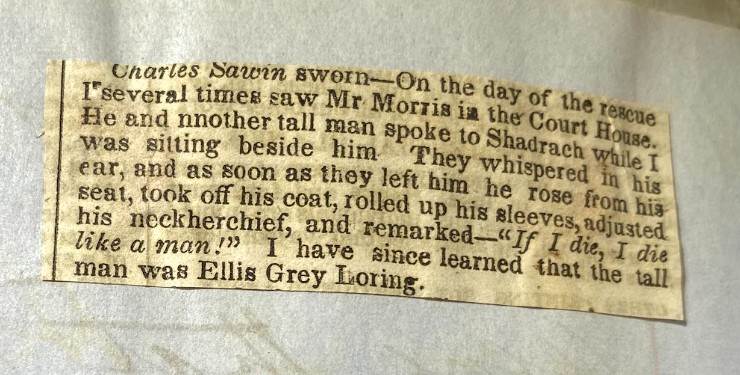 Newspaper clipping from Morris's scrapbook on the Minkins case and rescue trials. Courtesy of the Canton Historical Society.

Robert Morris, Richard Henry Dana Jr., Ellis Gray Loring (Morris’s legal mentor), John G. King (Morris’s former employer from Salem), and other lawyers from the Boston Vigilance Committee immediately volunteered to represent Minkins. They managed to delay the proceedings for three days. As the federal marshals were clearing the courtroom, a group of rescuers grabbed Minkins from their custody and carried him into the street. The details vary from account to account, but Minkins ultimately escaped to Canada and lived in Montreal until his death in 1875. 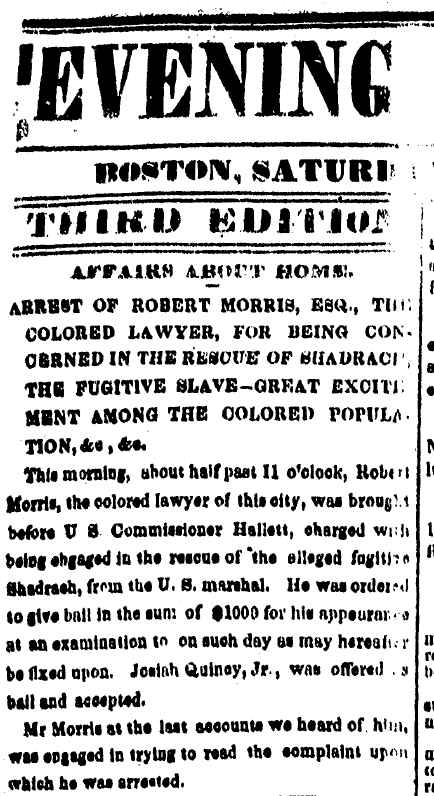 The drama continued for Robert Morris after Shadrach Minkins’s escape to Canada. President Millard Fillmore and many federal officials in Boston were outraged by the rescue. The federal prosecutor in Boston began arresting and indicting suspected participants in the rescue, including Robert Morris and Lewis Hayden. Morris, Hayden, and five others were indicted and charged with violating Section 7 of the Fugitive Slave Act of 1850, which made it a crime to aid in the escape of a fugitive.

Morris’s first trial ended in a mistrial after one juror indicated that he was unwilling to enforce the Fugitive Slave Act. During the second trial, Morris’s lawyers, Richard Henry Dana Jr. and John Parker Hale, had to contend with several eyewitnesses who testified to Morris’s involvement. These witnesses alleged that Morris indicated to a group gathered outside of the courtroom that there was a good opportunity to act once the courtroom had emptied; that Morris was in a carriage with Minkins before it became necessary to proceed on foot due to the crowd in the street; and that Morris was walking down the street with his arm on Minkins’s back. Dana and Hale argued the unconstitutionality and inapplicability of the Fugitive Slave Act, focused on the inconsistencies in the various accounts, and gathered thirteen character witnesses for Morris. The jury found Morris not guilty on November 12, 1851. 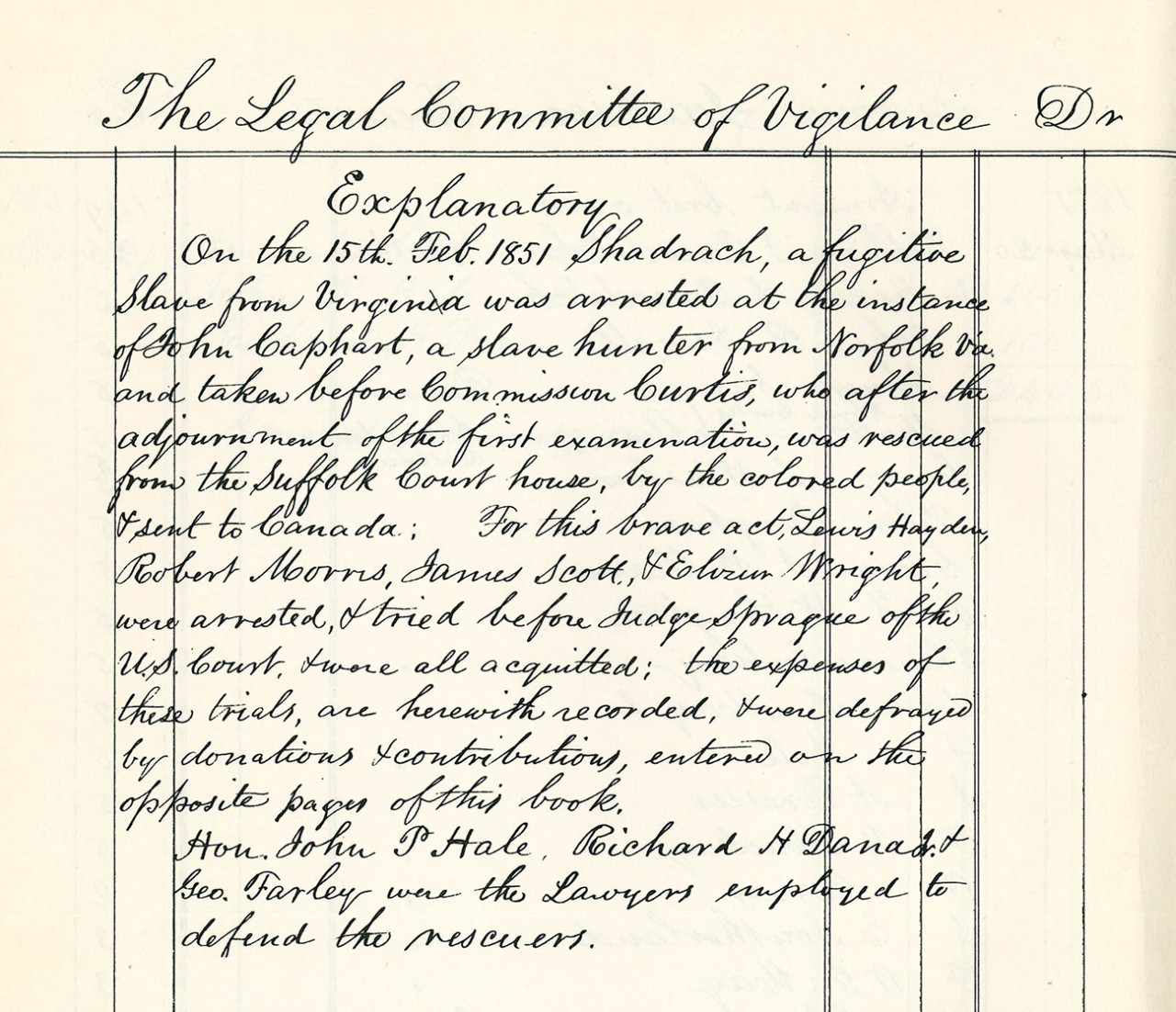 In addition to facing his own trial, Morris represented at least one of the other accused rescuers, James Scott. Morris’s scrapbook of the case includes newspaper clippings and his handwritten notes on the testimony of witnesses in his and Scott’s cases.

The Vigilance Committee covered the expenses related to Minkins’s representation and the trials of the alleged rescuers. In the aftermath of the rescue trials, Morris publicly maintained his innocence. It is worth noting, however, that after Lewis Hayden’s death in 1889, a friend shared Hayden’s account of that February day in 1851. According to the friend, Hayden had described how he and Robert Morris escorted Minkins to the nearby home of Elizabeth Riley, who hid Minkins in her attic until he could be transported out of Boston. 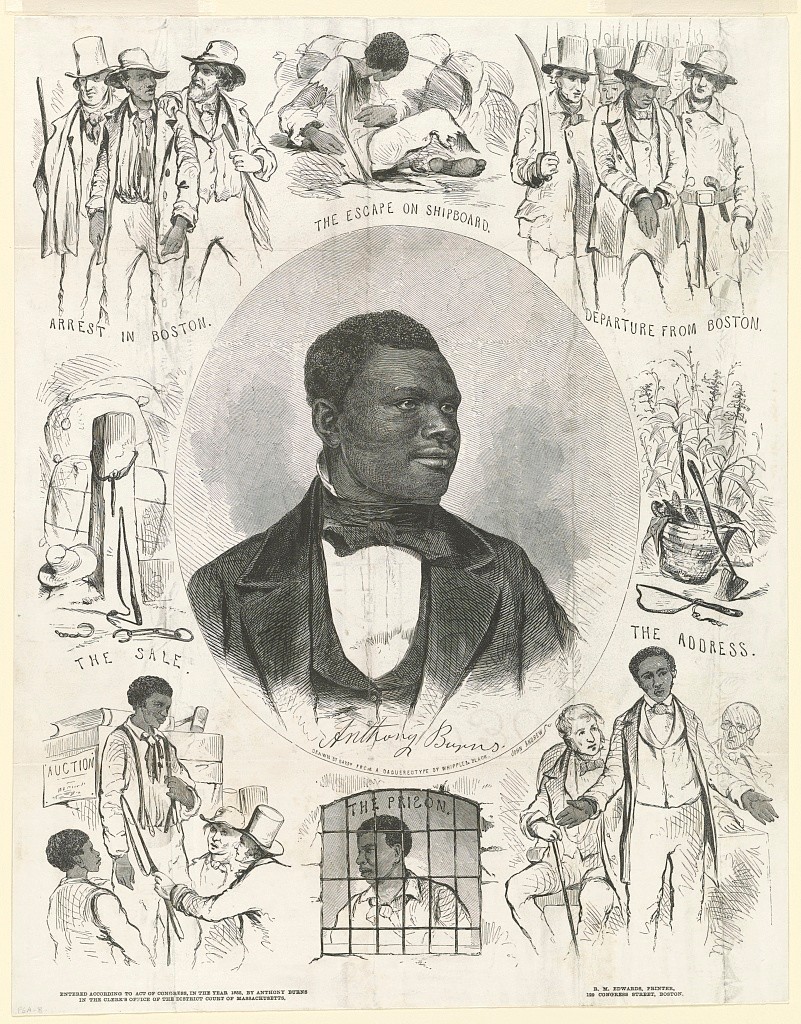 Before and After Minkins

In the years before the Shadrach Minkins rescue and Morris’s own acquittal in the rescue trial, Robert Morris secured lost wages for Leaven Young, an eighteen-year-old sailor who had been enslaved aboard a ship despite a written contract with the captain. In the late 1840s and early 1850s, he raised money to secure the acquittal of Captain Daniel Drayton, who was charged with helping 77 fugitives from slavery escape from Washington D.C.

In 1854, Morris and other Vigilance Committee lawyers volunteered to represent Anthony Burns, another freedom seeker captured in Boston. When a crowd attempted to rescue Burns, one of the federal marshals guarding the courthouse, James Batchelder, was killed. Burns was returned to slavery in Virginia, and the would-be rescuers were charged. Morris represented them too. 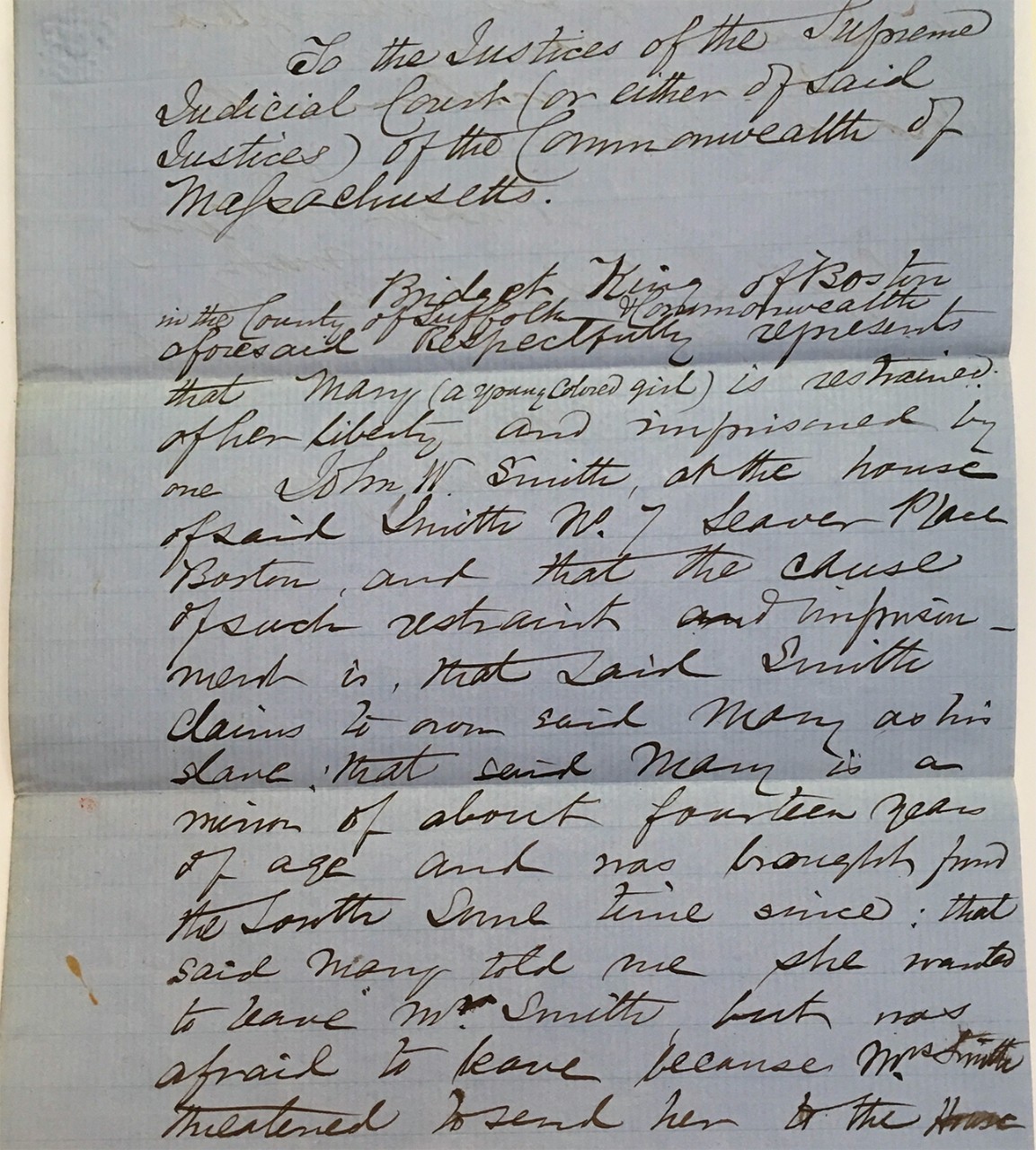 Petition for a writ of habeas corpus filed by Morris on behalf of Mary Miranda. Massachusetts Supreme Judicial Court Archives.

In 1856, Morris helped secure the freedom of Mary Miranda, a young girl of color who had been formerly enslaved or perhaps indentured in the South. Mary, who was thirteen or fourteen at the time Morris filed a petition for a writ of habeas corpus on her behalf, had been sent to Boston years prior to assist a Mr. and Mrs. John W. Smith with their infant. She said that the Smiths considered her enslaved, restrained her of liberty, and threatened her with jail if she had contact with any people of color. The judge ordered Mary’s release in November 1856.